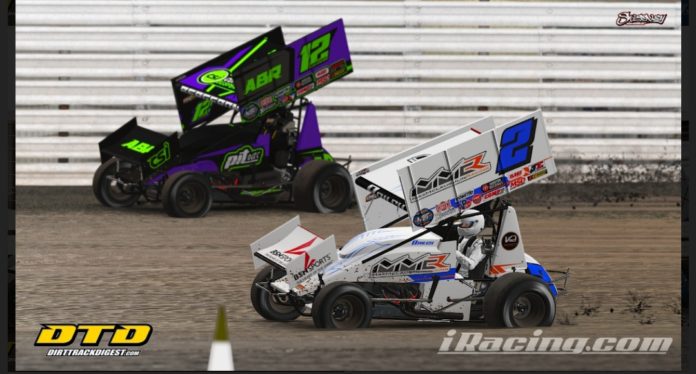 SYRACUSE, NY – Drummondville, Quebec’s Alex Bergeron once again proved why he is the name the makes the most headlines and collects the most wins in iRacing. Sunday afternoon, he retook the lead from Bryce Bailey shortly after midway to win the Lucas Oil Empire Super Sprints King of the Quarantine Nationals 40 lap A-Main held at the virtual Knoxville Raceway.

The win was Bergeron’s second in the three race King of the Quarantine Series. He took home $170 for the effort which included a $50 bounty from Dirt Track Digest.

“I was running a little conservative there on the top when I got passed by Bryce (Bailey). I knew I would have to change my line to get the lead back and found the bottom to be pretty good,” Bergeron said on the pass that propelled him to the win, “The track was a little tricky so you had to search for a line but it all worked out.”

Bailey took the lead from Bergeron on lap 23 and held it right up until a lap 29 caution when Bergeron pulled a slide job going into turn three to retake the top spot. When the yellow lights shined timing and scoring confirmed that Bergeron was the leader.

“I wished that yellow didn’t come out,” quipped Bailey, “We (him and Bergeron) was having a good race and I think I had a shot to pull off the win. But, he got a good restart and found the bottom. That’s where he is so good.”


On the restart a third starting Rylin Turley actually passed both Bailey and Bergeron to inch ahead at one point only to have Bergeron gain control and then start to open up a slight distance in the closing laps.

When the checkers were displayed it was Bergeron the winner over Bailey. The two drivers finished in the top three in all three Quarantine events showing their iRacing skills. Canadian Kevin Loveys made a powerful late race charge to collect third ahead of Adam Buchanan and Turley.

This marks the end of the ESS iRacing series for the spring of 2020. It was announced that a 10 race iRacing Series will debut in the fall of 2020 with the Sign Shop at Kinney’s already signed on as the tour sponsor for the Lucas Oil ESS’ next iRacing Tour.