BATAVIA, NY – Genesee Speedway is known as “The Place to Race”, but it is not every day sprint car pilots get to fly around the Genesee County Fairgrounds. This Saturday, May 8, some of the best in the Northeast get their chance.

The Lucas Oil Empire Super Sprints will kick off their 2021 Tour with a $2000-to-win event. It is their first full-point show in Batavia this millennium and their first appearance on the 1/3-mile since 2007. To add to the anticipation, ESS was only able to hold one event last year and is looking ready to get back to a points battle again in 2021.

This past Saturday, 2007 Genesee Winner Chuck Hebing and Nick Fratto took some laps around the track, with Fratto turning a 15.005 second lap aboard the Stelter No. 36 in his first laps back in a sprint car since 2008. Those two cars were the top 2 in the last ESS-sanctioned event at Genesee and have their eyes on the prize this Saturday.

Last Saturday’s event at Genesee did not reach the finish line, with only 2 of the 6 features able to reach their conclusion due to repeated showers. All six weekly divisions will be back in action, including the Novice Sportsman, who will run their makeup feature to kick off the night. The Sportsman and Mini Stocks will run their feature on May 15 while the Late Models win run their event on May 22.

To add to the fun on Saturday, IndyKart Raceway will embark on their partnership with $100 going to the hard charger in each of the 5 adult divisions features plus the Empire Super Sprints event. In addition, there will be the first IndyKart Raceway Trivia Question of the Night, which will be a weekly feature to give fans the chance to win passes to the all-new karting track at Marketplace Mall in Henrietta, NY. IndyKart’s Scott Kreutter will be making his first start of 2021 in the Hoddick-owned No. 49 at the closest track to his Cowlesville home.

A-Verdi Storage Containers will present the 2nd Night of racing in Genesee County. A-Verdi is a long-time supporter of Genesee Speedway, as well as many other dirt tracks across New York State. They have the ability to suit your residential, commercial or residential needs with many sizes of ground-level storage containers located across New York State. For more information, visit www.Averdi.com.

To handle all of the action of this jam-packed show, hot laps will get underway at 5:00 with the Novice Sportsman make-up feature starting at 5:30. Pit gates will open at 3:30. For more information, visit www.Genesee-Speedway.com. 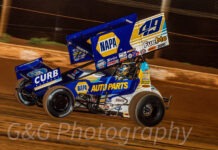 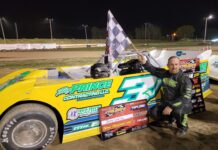