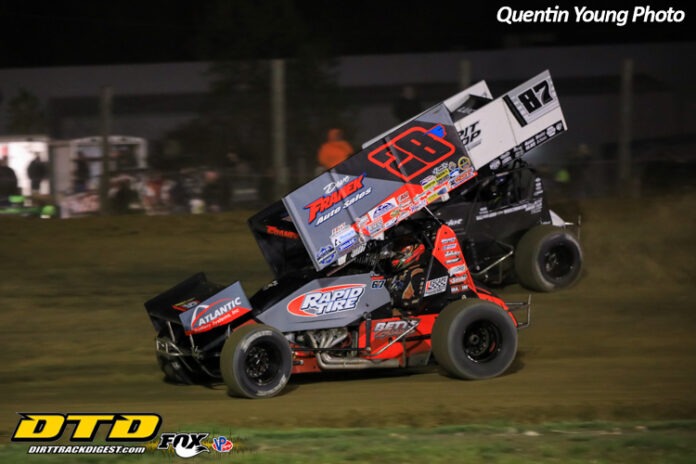 BATAVIA, NY – The highly anticipated return of the Lucas Oil Empire Super Sprints (ESS) to the Genesee Speedway did not disappoint. “No Panic” Davie Franek from Wantage, New Jersey used lap traffic late to get by Tonawanda, NY’s Matt Farnham with five laps remaining and would go on to pocket the $2,000 payday in the season opener for the ESS.

“We were fortunate enough to come hereafter Selinsgrove rained out and it worked out good for us,” Franek said. He continued to say that, “The track was racy and got smoother, wider, and slicker and we could run the bottom, middle, or top.

“The Cobra” Chuck Hebing and Matt Farnham led the field to the green flag with Hebing showing the way early on. Early on, Franek was on the move as the tenth-place starter was already up to sixth by lap two and Scott Kreutter was up in the fifth position. Multiple cautions slowed the pace of the event, including a two-car incident with Sammy Reakes IV and Jason Barney getting together in turn two.

Hebing would pull away from Farnham and Danny Varin early on. Franek would continue his charge to the front by moving into third on lap five, with Kreutter taking over fourth place. Nick Fratto would bring out the caution on lap six, ending his eventful day. Fratto did a wheelstand during his heat race and moments later, would climb and hit the fence outside turns one and two.

On lap ten, Hebing’s strong night would come to an end as he spun while working lap traffic, handing the lead over to Farnham and Scott Kreutter. On the restart, Kreutter would get tagged and hit the front stretch wall, coming to a stop in turn one and getting collected by a handful of cars, including Hebing.

With Farnham in the lead after the field went back under green, Franek would move into the runner-up position and then with five laps remaining, would work his way around Farnham while in lap traffic to grab the lead. “The car was neutral most of the race and it got better late, and we were keeping up with Farnham and I was fortunate enough to get by him for the lead in traffic.” Franek would go on to score the win over Matt Farnham and Paulie Colagiovanni.

“We had a fast car all night and it unloaded well,” Farnham said. “Having the experience running the 410 Sprint has helped us and used that knowledge to get a second tonight.” “I cannot thank everyone enough for their help on the car and for the sponsors for their support,” Farnham added. Farnham had some track experience at Genesee as he ran Sportsman races as well as a Micro Sprint event.

Paulie Colagiovanni had his work to do all night long. The reigning ESS Series Champion raced his way in the dash to better his starting position and then drove his way up through the field. The 14th-place starter shared his thoughts. “The car started a little tonight, but we got the car working in our favor,” Colagiovanni said. Like Farnham, the Cicero, NY native raced at Genesee a handful of years ago while running the 600cc Micro Sprints.

Multiple flips occurred throughout the night for the “Winged Warriors” including Jeremy Barnard, Denny Peebles, Parker Evans, Keith Granholm, and Shawn Donath. All walked away and most were able to continue their evenings. Evans did not return after flipping in time trials. Barnard attempted to qualify through the B-Main but did not make the show.

27 DIRTcar Sportsman signed in and Ransomville, NY’s Jim Harbison picked up the win. “It was my first win on opening night since winning a 4-Cylinder race on Opening Day,” Harbison said. “It is definitely good to be back in victory lane. Car was hooked up all night and was really easy to drive.” Second-place finisher Phil Vigneri III was disappointed but pleased to have the car in one piece. “Overall, I’m happy, and we have to look at the big picture. A lot of drivers are leaving here with torn-up racecars and lucky we are one of the few that are able to leave the same way we left the shop to get to the track.” Vigneri said, “The track was good, and was surprised how much moisture was still in the track,” Vigneri said. Track conditions made the racing action better with multiple grooves available to race on throughout the night. Third-place finisher TJ Newton had one of his strongest runs in a couple of years in the Sportsman division. “We’ve struggled the last couple of years on this car and it has made a huge difference switching over to coils,” Newton said. Newton credits his switch over to the coils to father-in-law Jim Johnson. “We couldn’t have asked for a better track,” Newton continued. Newton would like to thank his wife Jess, his family, extended family, sponsors, and crew for their support. Scott George and defending track champion Cameron Tuttle completed the top five.

Roughly 125 cars filled the pit area on this race night. Next on the Genesee schedule is the Brian Ace Memorial for the Street Stocks plus double features for the Sportsman and Mini Stocks.