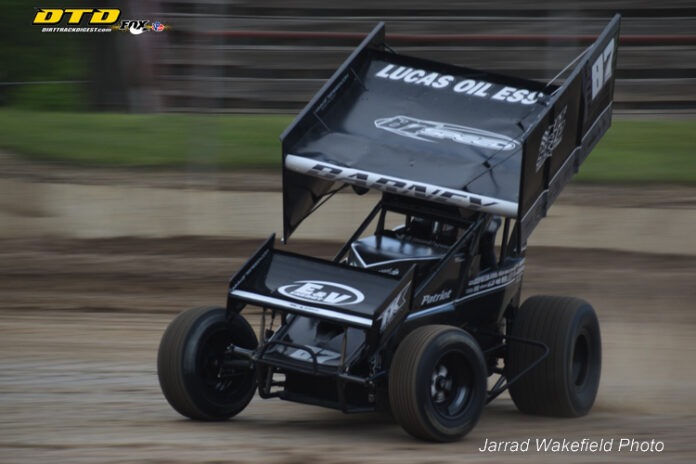 FULTON, NY – The Empire Super Sprints rolled into the Fulton Speedway on Saturday night, adding to the already packed pits of the speedway with 28 fire-breathing 360 Sprint Cars.

It was only fitting that Brewerton’s Jason Barney dominated the 25-lap A-Main for the Empire Super Sprints. Barney started from the pole and led all 25 laps of the main to claim his second consecutive Empire Super Sprints win, but the race had more complexity than what the results sheets may show.

Barney and Jeff Cook led the field to a very short-lived initial green flag. By the time the leaders had gone under the flag stand, Matt Tanner ended up sideways in front of the field as the front end collapsed on his No. 90 machine, causing a melee to ensue on the front straightaway. Parker Evans, Keith Granholm, Chuck Hebing, and Davie Franek also suffered damage in the incident. Tanner, Evans, and Granholm saw their nights end before they managed to complete a lap. Hebing and Franek were able to visit the pit area and return to the track for the restart.

Not long after the restart however, Hebing slowed in turn four. The ‘Cobra’ took his car pit side and recorded a DNF on the night. The final restart saw Barney jump out to an early lead over Jeff Cook and Scott Holcomb. Barney used the white-knuckle lane around the top of the Fulton Speedway to pull a gap that was just over a straightaway ahead of the field.

Meanwhile, the race for the podium heated up almost immediately. Scott Holcomb initially held third place, but he quickly fell to Shawn Donath. Donath then wasted no time getting around Jeff Cook for second Paulie Colagiovanni was not far behind Donath, as he too picked off cars one by one to advance into the third place position.

The race seemed to be settling into a rhythm around halfway. That notion went out the window once Barney hit lap traffic. The very wide racing surface of the Fulton Speedway on Saturday night meant that lapped cars came in packs of three of four, often racing two or three-wide in various battles for position. Barney’s lead over Donath and Colagiovanni evaporated within a handful of laps.

Donath also lost his short lead over Colagiovanni in traffic, and Colagiovanni passed Donath to secure second place. Colagiovanni negotiated lap traffic as fast as possible to reach Barney. Colagiovanni came within four car lengths but was unable to make a move as Barney successfully weathered the storm of slower traffic to take a flag-to-flag victory.

Adapting to change was a big part of the night for Barney at a track he knows very well.

“I feel so comfortable here,” said Barney. “Fulton was my first home track, every time we come here I just feel so comfortable with the car and the things we do with it. Tonight the track wasn’t like anything we’ve won on here before though, and the car is very different from what we normally run. My guys made good setup calls all night long.

“Last week at Thunder Mountain we put the same setup in that we’ve won with twice before,” said Barney. “Tonight we didn’t go to what we normally do here, but went with what we felt was the right changes. Fulton is a great track. With this track we feel like we can win from anywhere with the right car. I’ve won from 12th here before.”

Barney dealt with lapped traffic for about half of the feature, many of whom were in intense race-long battles for position.

“Anything can happen in lap traffic. We had three or four cars racing very hard in front of us,” said Barney. “I just had no air on my car, it slowed us down a ton. I just couldn’t do anything.  I wasn’t quite sure what I was going to do. I tried to cover as much track as I could to hold the guys behind me off, and it worked out”.

“Fulton is a bit of a weird track from the rest of the tracks we go to,” said Colagiovanni. “It really develops a true ‘New York Slick’, it’s pretty unique. The only track that reminds me of that is Utica-Rome. We adjusted very well to it, however. We had a tight car all night long and it went in our favor tonight.”

Donath brought home a stout third place run after running second for a majority of the feature.

“It’s hard to get by lapped cars here,” said Donath. “I’ve been racing here a long time, and it is one of the hardest places to win at. The surface changes dramatically throughout the night. You have to stay on top of that.”

Donath and his team put in many hours of hard work on the No. 53, and it clearly paid off.

“Last week we cut the front clip off of the car,” said Donath. “We cut it in front of the roll cage forward and rebuilt it from scratch. Last week we went out and found we still had some work to do in a few areas. We came out here tonight, and by the time I had finished hot laps I knew we had a really good racecar. It drove so good. We’ve just felt like we’ve been missing something the past few races, and we’ve finally found it.”

The Empire Super Sprints return to action on Friday, June 11th at the Mohawk International Speedway.