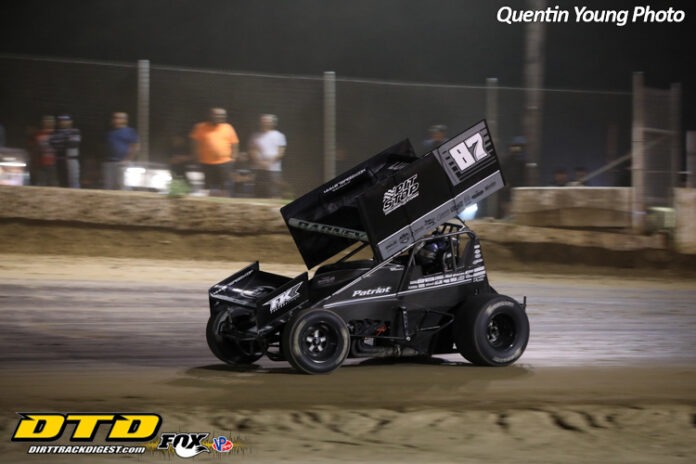 FULTON, NY – Central New York Speedweek for the Empire Super Sprints rolled into the Fulton Speedway on Saturday night for their third race of the week. While this race was scheduled to be the fourth event, rain pushed out the second planned event at Land of Legends until July 20th, and rain threatened the previous’ nights Brewerton Speedway event, but the weather was not enough to stop the show.

On this night, it was a bit of déjà vu as Jason Barney claimed his second victory at Fulton this year in Empire Super Sprints competition in a race that went wire-to-wire. Paulie Colagiovanni finished second for the second time this year at Fulton, and Danny Varin filled out the podium after racing his way through the field.

Thirty-two Empire Super Sprints filled the pit area on a beautiful night at the Fulton Speedway, which was more than welcomed considering the storms that have plagued New York speedways all week long. Colagiovanni and Scott Kreuter led a twenty-six-car field to the green flag, which promptly saw Colagiovanni jump to the lead and start to pull a gap on the field. On lap two, however, Jason Barney quickly made his prescence known. Barney jumped from his fifth place starting spot up to second by the time the field started lap three. Colagiovanni and Barney pulled away early, which set the stage for a race long battle for third.

The battle for third started with Matt Tanner and Scott Kruetter, who had been shuffled back to third and fourth by Barney’s early charge. The duo of sprint car veterans diced back and forth for position, which allowed Shawn Donath to enter the fray. Donath, who came home third in the last Empire Super Sprints event at Fulton, worked the top side of the Fulton Speedway to pass both Tanner and Kruetter to claim third for the time being.

Meanwhile, as Donath worked around Tanner and Kruetter, Jason Barney was beginning to pressure Paulie Colagiovanni for the race lead. It would not take Barney long to wrestle the lead away for good. Barney sailed around Colagiovanni for the lead on lap eight for good. Barney and Colagiovanni both had large gaps over the rest of the field and between each other, although late race lap traffic did begin to close that gap. It was nowhere near enough, however, and Barney effectively cruised to his second Fulton Speedway win of the year with the Empire Super Sprints tour.

The battle for third picked up on lap fourteen as Barney and Colagiovanni took off. Tanner and Kruetter were battling for fourth when lap traffic began to slow Donath’s pace, allowing the duo to close the gap once more. While that trio battled for the final podium step, Danny Varin, Matt Farnham, and Larry Wight were looking to join the fray. Varin struck first, screaming by Tanner and Kruetter on the extreme top side of the speedway to move into fourth on lap fifteen. Farnham followed suite, and in similar fashion danced by the same two drivers on lap sixteen to re-enter the top five after a rough start shuffled him back from his fourth place starting spot. On lap twenty-one, after many laps of effort, Varin found himself in the right place at the right time and was able to pass Donath to claim third. Varin faced pressure from Donath, Farnham, and Wight in the last four laps, but held all three drivers off to claim the final podium spot. The top five was completed by Donath and Wight, with ‘Lightning’ passing Farnham for fifth position with two laps to go.

Barney claimed yet another win at Fulton, but this time had a bit more work to do from the fifth-place spot on the starting grid to get the Speedweek win.

“When you win a race from the front row, it isn’t always as respected,” said Barney. “You don’t have to work as much to win those races; tonight, we had work to do. Passing the good cars in front of us like Paulie make us feel good, he’s arguably been the best car for the last year and a half. It feels like we’re making up ground on those guys, which is a good thing for us. We have a ton of laps here and have had some good luck here in the past and tonight, both of those things contribute to our success here.”

Barney will look to carry the momentum from tonight’s victory into Weedsport tomorrow.

“Weedsport is a very tricky track,” said Barney. “I like going there though, I’m comfortable there. It’s where I first started racing sportsman. I have a lot of laps there in sportsman and modified cars, which is a big advantage for us. We’ll see how tomorrow’s race goes, we’ve had a lot of good starting spots and have had a great race car all year long, but you never know when things can the other way.”

Barney has been impressive all week leading up to the finale.

“I’m really proud of our Speedweek so far,” added Barney. “We ran second at Can-Am, which is a place where historically we’ve been pretty bad. We haven’t been on the podium there in at least five years. A top five for us there is a win, let alone a second-place finish. I was a little disappointed with how the Brewerton race went for us, but we found out there was a part failure today that we didn’t find until hot laps here. I wasn’t sure how our night was going to go, with the hot lap issues and starting in the back of our heat race. It’s an incredible testament to our team and cars, passing that many good cars given the circumstances isn’t common.”

Colagiovanni brought home another second-place finish, but just didn’t quite have enough to challenge Jason Barney.

“We had another really good car here,” said Colagiovanni. “We just missed a little with the setup tonight, the car was just sprung a bit too stiff for the track we had in the feature. However, we got some good information for Weedsport tomorrow out of tonight’s race.”

Colagiovanni has been one of the cars to beat all Speedweek long, and the morale from running well during the most demanding week of the year for sprint cars in New York has been part of his success.

“It’s been a solid week for us,” said Colagiovanni. “We had the win at Can-Am, which was big for keeping us motivated to work and race as hard as we can. It’s not bad at first but it becomes grueling as the days and races roll on. We got rained out Thursday at Land of Legends, and I thought we were going to be rained out at Brewerton, but we got the show in. Hopefully, the rain stays away so we can finish the week out at Weedsport tomorrow.”

Colagiovanni went on to discuss the teams recent success on slick tracks like Fulton.

“We used to be really bad on slick tracks like what we saw at Can-Am and here at Fulton tonight,” added Colagiovanni. “We used to always be chasing the setup on nights like these, and I just wasn’t able to drive these tracks the way I should be. We’ve made major strides with the setup, and I feel much better as a driver on these slicked off tracks. Hopefully, we can carry our knowledge onto some of the smaller tracks on the schedule like we have on some of these bigger tracks so far this year.”

Varin’s third place run capped off an impressive rebound effort at Fulton after the Varin team struggled at Brewerton the night prior.

“We found something at the end last night,” said Varin. “We missed the setup for our timed hot laps and the heat race. When we went out for the B-main, we threw a setup at the car that was off-the-wall from what we usually do, and the car has been different ever since then. It’s been more driveable with the new setup, and I’m glad we carried that setup momentum from last night into today. I told my guys I had zero complaints with our car tonight. The only issue for us was the fact we started deep in the field tonight. Going from twelfth to third is tough with this field as is, let alone when the race goes green-to-checkered. The track was phenomenal tonight, and I hope we can continue to carry this momentum we have into Weedsport tomorrow.”

Varin admitted that week has been a grind so far, even with the rainout.

“Speedweek is one of the most difficult weeks of the year,” added Varin. “It’s a lot of racing combined with work in the middle for me. After Can-Am, I drove home to go work for the business I have, and when Land of Legends rained out, I stayed home and worked some more. I’ve got a good crew of guys that keep the car in good shape. It can get tough when the car’s not running good, especially when everyone’s in the same camper for the week. Nobody’s happy in situations like those.”

The Empire Super Sprints wrap up Speedweek at Weedsport with another full night of racing, sharing the event card with Big Block Modifieds and the NY6A micro-sprint touring series.