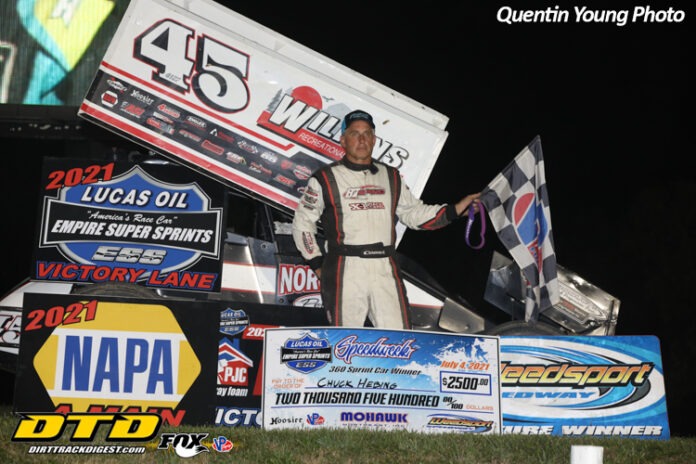 WEEDSPORT, NY – It was becoming a Central New York Speedweek to forget for two-time Lucas Oil Empire Super Sprints champion Chuck Hebing. Subpar finishes and DNF’s filled the three preceding events, however, all that changed in the finale at the Weedsport Speedway where he beat Paulie Colgiovanni to the line to claim the $2,560 victory.

This night even started on a bad note for the Ontario, NY veteran. In his timed hot lap session Scott Kreutter made contact with the outside wall and Hebing had nowhere to go. He made contact with Kreutter and the wall resulting in no time and starting in the back of his heat.

Just like Jason Barney the night before, he ran his heat like a driver possessed and finished in an A-Main redraw spot. “it’s been a tough week for all of us and it didn’t start out to well tonight. Luckily we just bent a wheel so we could keep racing,” said the driver known as “The Cobra”, “In the heat a few cars slid up the track, we got position and finished in the redraw. Then we went from there.”

Hebing took the lead from pole sitting Jonathan Preston right at the start and while he led all 25 laps, the final 24 went non-stop which made slower traffic a big hey. “The track had different grooves you can run and the lapped cars were all over so you had to pick your lines. We were lucky that it all worked out and we got the win,” Hebing then went on a reflected, “This win means a lot, I know Al (Heinke), Jimmy (Phelps) and the guys really well so to do it at Weedsport is special. To win this late in your career, you just don’t know how much time you have left so each win is special. And, I needed to finish ahead of Kelly (Hebing, his daughter), I didn’t want to hear how she was doing better than me this week.”

Paulie Colagiovanni started in fifth and got into second mid-race to take up the chase of Hebing. He too had to face the same aspects of slower traffic but he was hoping that it would help him. “When you’re chasing the leader, you hope that maybe he would have troubles with a slower car and it helps you. There were some laps where I would close and then some laps where he would gain again,” he continued on the phases of the A-Main, “I got close enough where I maybe could have done a slider but I just didn’t want to get into his left rear and have something happen.”


For Colagiovanni, he took second in Speedweek points and he was happy. “Yes, we are happy, you always want to win but to finish second behind Jason was good for the team. Now we just have to see what the year brings and we will try to catch him for the championship.”

Barney finished off a very solid Speedweek which saw his worst finish of sixth to claim his second Speedweek title. During the race it was conservative first then win mode second. “I did just want to keep Paulie and Danny (Varin) close so you know you got the Speedweek title in your grasp. But as you get into second then win mode kicks in so we did try hard for another one also,” Barney noted, “The track was very technical and you can race all over, I really like that. It was a fun race, we had a good car, Cobra and Paulie were maybe a little better tonight but we are very happy to get our second Speedweek title.”

Heats were won by Colagiovanni, Wight and Barney with Davie Franek winning the dash and Denny Peebles copping the B-Main. A total of 30 sprints were in the pits in front of a big crowd for Weedsport’s first ever Speedweek event.