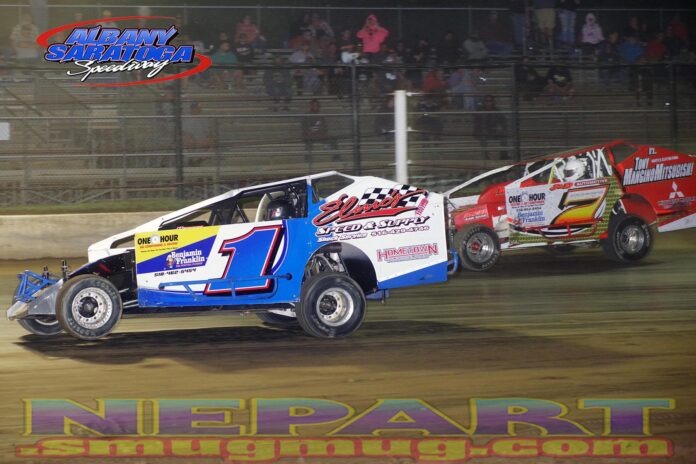 MALTA, NY – A longstanding tradition in Capital District dirt track racing will be adding another chapter to its legacy on Friday, July 23 when A-Verdi Storage Containers Presents the Empire Super Sprints at historic Albany-Saratoga Speedway.

The Empire Super Sprints made their first appearance at Albany-Saratoga Speedway in 1985, and have been back 28 times since then. The ESS last ran at Malta in 2019, with Jonathan Preston adding his name to the elite list of ESS winners at Malta.

Back in the 1980s and 1990s, the ESS winged warriors usually made two stops at Albany-Saratoga. Both Craig Keel and Dan Kaszubinski won four features each during those early days and their numbers are still tied at the top of the all-time win list at Albany-Saratoga.

Albany-Saratoga Speedway was also the site of a groundbreaking victory in 2002, when Erin Crocker, then a student at Rensselaer Polytechnic Institute in Troy, became just the second woman to ever win an ESS feature. She followed in the footsteps of Becca Anderson, who won a URC/ESS Challenge race at Rolling Wheels in 2000.

When the ESS sprinters pull off Route 9 on Friday night, one of the drivers determined to find his way to victory lane is Jason Barney. Barney has won three of the eight features on the ESS schedule so far in 2021, but he has never won at Albany-Saratoga.

Steve Poirier, the winningest driver in the history of the ESS, picked up the win in 2016, which was his first victory at Albany-Saratoga since 2006.

Stewart Friesen, who now concentrates on racing modifieds and his Halmar-sponsored Toyota on the NASCAR Camping World Truck Series, is also a two-time ESS winner at Albany-Saratoga, taking the checkered flag in 2013 and 2015.

A-Verdi Storage Containers, based in Savannah, N.Y., has been locally owned for over 40 years. The company’s ground-level office and shipping containers meet the unique space needs for any site while keeping a professional appearance in any environment. It’s not unusual to walk into a race track and see one of A-Verdi’s containers being used for onsite storage.

“A-Verdi has been a great partner for Albany-Saratoga Speedway,” said speedway promoter Lyle DeVore. “We share the same values. We both want to provide a dependable, high-quality product for our customers.”