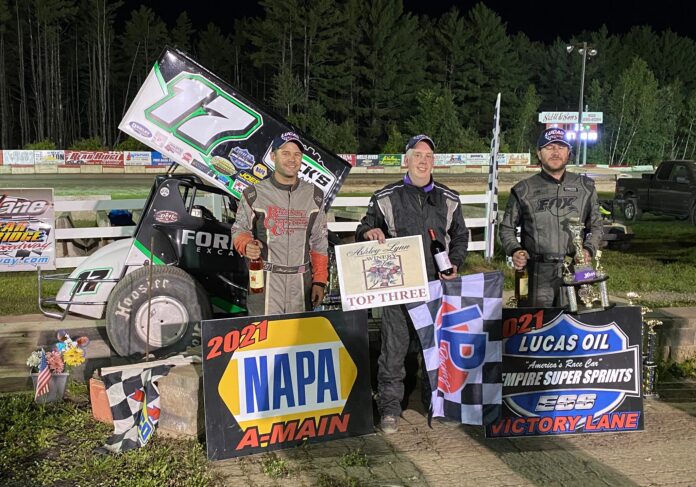 The NAPA Auto Parts 25 lap, green to checker, finale’ was completed in six minutes and 29 seconds which made for the quickest A-Main of that distance in the club’s 37-year history.

Donnelly drew the pole for the A-Main but it was current ESS point leader Jason Barney that took the top spot at the start. With Barney taking to the top side right away, it did have the eventual winner worried. “This track is always know to be fast on the low side and that’s how I had my car set up,” he said afterwards, “But, when I saw Jason take off on the top it worried me, worried me a lot! These guys are just so good, and they worked the track all night to make for a good high side.”

It didn’t take long before the leaders closed in on slower traffic and that enabled Donnelly to close in on Barney. “This place is a lot of fun when it’s racy and then you get to slower cars. I really have to think where and how you want to get by,” he went on, “Jason was staying on top and I was good on the bottom. It just happened to open up for me to get by.”

Donnelly is a champion with the Sprint Cars of New England and has many years running a modified at Bear Ridge, experience was a plus on this night. “Oh, I’m sure it helped quite a bit. I have a thousand laps here where many of the these guys had none,” Donnelly continued to analyze, ‘You can’t sell the ESS teams short. They travel all over and can adapt to quickly. This win just means so much, yea it was at a track I know, but, when you can win with ESS it really makes you proud. I’m honored to have a win with such a great organization”

Matt Tanner was one of the few ESS teams that has laps at the Bradford oval. It was a decade ago but it was still laps. “The track changed some but I’m sure having some laps here helped,” said the driver from Stephentown, NY, “The car was good and I was closing in on Jason in the late stages. It was running as hard as I could to see if we could catch him and get by. We did and second is a good finish.”

For Barney, while it was another podium finish and he opened up his point lead over Paulie Colagiovanni, taking the lead at the start and coming home in third wasn’t in the plans. “The guys gave me a awesome race car like they always do, this one was on me, I just didn’t read the race track right,” he dead-panned, “Usually you’re pretty happy with third but I just feel I gave this one away some. But tomorrow is another day and there’s always another race. I’m so fortunate to be where I am today and we will move on to the next.”

Colagiovanni followed up his win from the night before to finish in fourth with Danny Varin fifth. The next five was Davie Franek, Shawn Donath, Clay Dow, Caleb Lamson and Will Hull.

The $75 to win heats were taken by Colagiovanni, Franek and Varin. The Dash was won by Scott Holcomb.