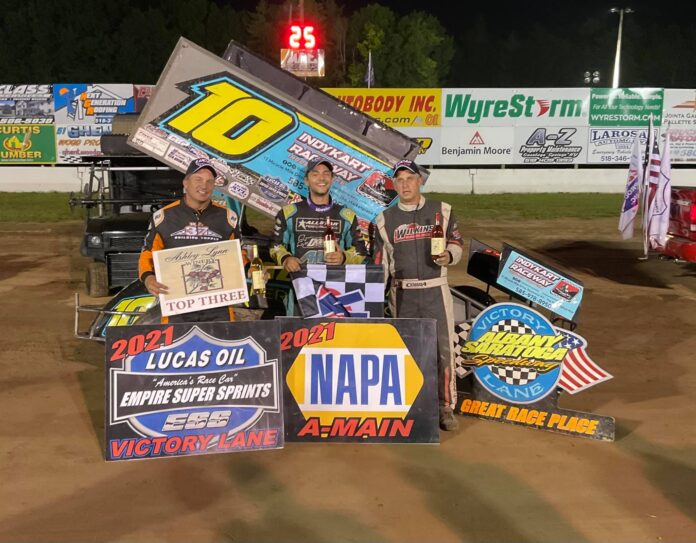 MALTA, NY – Defending Lucas Oil Empire Super Sprints (ESS) champion Paulie Colagiovanni had a night of night’s Friday night at the Albany-Saratoga Speedway. He completed the complete sweep of timing the fastest in his group, winning his heat and then capturing the 25 lap the NAPA Auto Parts A-Main collecting $2,110 for an evening’s worth of work.

The victory was his second of the season which closed the gap some on current ESS point leader Jason Barney. “We had a good car and the track was real racy, you could put the car anywhere on the track which was a big help,” Colagiovanni noted. With the only yellow flag in the on the first original start, lapped traffic planned into the event.

“There were cars all over racing, but when you have a good car and a good track you can get around them,” he noted, “We were lucky not to get into any of them and to pick up another win this year. Hopefully we will get a few more.”

Pole sitter Shawn Donath lead the first five laps before Colagiovanni slipped by. From there it didn’t take long before the 20 year old pilot entered the slower traffic and started to make his moves. Chuck Hebing maneuvered his way into second and was hoping to pick up the chase.

“I knew once I got by Shawn I was in second, I found a lane that worked in turn one that helped but I just needed a yellow to get to the lead,” said the former two-time champion, “It’s a good run for the team, they work hard, we went back to some basics and are getting some good runs.”

Also showing some improved speed of late is Jeff Cook and he came home third right behind his good friend in Hebing. “it was a good run for all of us, myself and the team,” Cook summed up, “It was a good car right off the trailer and the track was a real good tonight. It was a fun race tonight and we were lucky to have a good finish.”

Heats were won by Cook, Tanner and Colagiovanni. The dash was won by Cory Sparks with Barney the B-main winner.