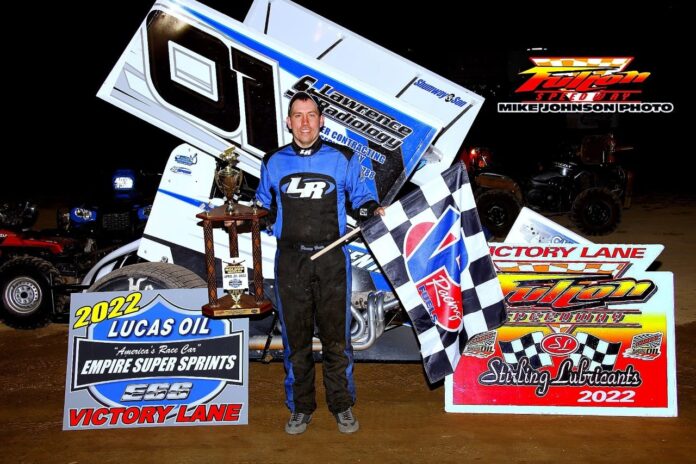 FULTON, NY – The highly anticipated Highbank Holdup weekend kicked off Friday night at the Fulton Speedway with night one of the two-day show.

After exciting, high speed, side-by-side racing through every division, Danny Varin, Casey Cunningham, and Tim White stood in victory lane with their names now in the record books as a feature winner at the speedway.

Thirty-one Lucas Oil Empire Super Sprints signed in to the pits for their first ESS race of 2022 season. Three heats, a dash and a B-Main, were raced to set the 26-car starting A-Main.

Danny Varin entered the night with a new look, new car number (01) and new chassis builder with Varin making a statement by leading every lap in the A-Main.

Davie Franek challenged Varin in the early laps but as the laps clicked off the scoreboard Franek could keep pace with Varin but never seriously challenged, even in lapped traffic.

The Empire Super Sprints will return to the Fulton Speedway for a big show on Memorial Day Weekend, Saturday, May 28th.

The Billy Whittaker Cars & Trux Hobby Stock will be at the speedway throughout the 2022 racing season.

In their 20-Lap feature Jim Evans led the opening two laps before Casey Cunningham took over the lead. Once out front, Cunningham was able to outrun the rest of the field for his first win at the speedway. Ron Marsden, Bob Buono, Brennan Fitzgibbons, and Ron Hawker rounded out the top-five.

Tim White made the long seven-hour tow from the state of Delaware with his Mod Lite payoff. In the 20-Lap AmeriCU Mod Lite feature, he would outdistance 2021 Brewerton Speedway track champion Justin Williams for the big win. Rick Demo, Tucker Halliday, and Hunter Lawton finished third through fifth.

This coming Saturday, May 7th, Compass Credit Union & Ferris Mowers will kick-off the chase to a championship with track points starting.

On the quick paced race card will be the Tracey Road Equipment DIRTcar Modifieds, DOT Foods DIRTcar Sportsman, E&V Energy Novice Sportsman, plus new to the speedway in 2022 as a weekly division is the Billy Whittaker Cars & Trux Hobby Stocks.