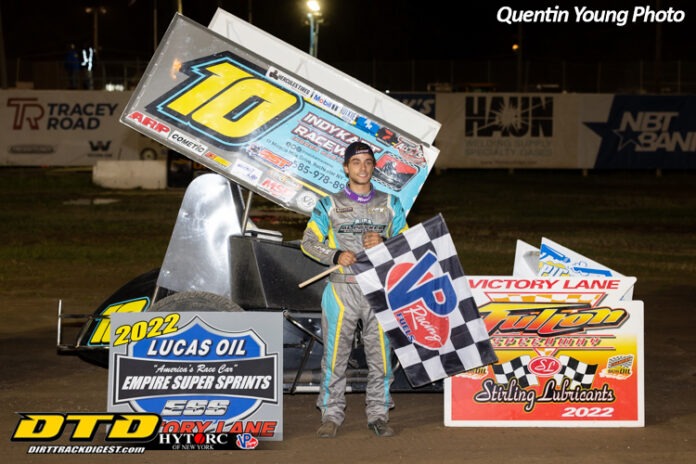 FULTON, NY –  All good things must come to an end.

That was the case for Danny Varin and his Empire Super Sprint win streak. Paulie Colagiovanni dominated Saturday night’s Empire Super Sprint 25-lap A-Main at the Fulton Speedway for his first win of 2022 and a $2,000 payday. Jordan Poirier finished second followed by Varin in third.

“This feels good,” stated Colagiovanni after the win. “I think we’ve been missing a little bit of bite all year. I think we finally figured it out tonight.”

Colagiovanni started on the front row alongside Sprint Car rookie Dalton Rombough. Colagiovanni pulled the slide job in turns three and four to take command on the first lap.

Before another lap could be completed the caution flag waved setting up a restart. Colagiovanni kept the lead on the first restart and over the next handful of laps before another caution came on lap four when Jeff Trombley’s front end collapsed. He collected Matt Farnham and Tyler Cartier.

One more caution came a lap later. After each, Colagiovanni was up to the task keeping the race lead away from Rombough and other challengers.

Colagiovanni showed the way while Jordan Poirier worked forward from the seventh position to take second on lap eight. He concentrated his efforts on Colagiovanni from there.

As Colagiovanni entered traffic on the 11th circuit, Poirier chased with Varin taking over the third position in the running order. Varin was working his magic on the bottom of the speedway.

Poirier utilized the extreme high lane all the way around the speedway allowing him to keep pace with Colagiovanni. Colagiovanni was working the middle lane at both ends the speedway. It kept him on the point.

Colagiovanni remained in heavy traffic as the race progressed as Poirier kept pounding the top lane. He got close several times as the race reached the final stages.

Poirier pulled even off the second turn with three laps to go, but Colagiovanni was up to the challenge. He stayed true to his line in the middle keeping Poirier second.

Colagiovanni was the first across the line for his first series win of the year.

Poirier gave it his all on the top-side. It was almost enough, but he just couldn’t get the run he needed in the final laps to steal the win away from Colagiovanni. He settled for second.

“We did everything we could to try and beat Paulie,” said Poirier. “I was too tight on the cushion. When I was getting close to Paulie in the dirty air I couldn’t turn my car. Congrats to Paulie. I’m happy to be back in second place after the way the year started here.”

Varin was happy with his third-place finish after starting way back in 12th via the redraw. He got a few cautions early to help him advance up through the field. He came up just short of making it four wins in four races on the season.

“We are very happy with it after starting deep in the pack,” commented Varin. “Sometimes it comes down to luck of the draw. Sometimes you get hurt by it and sometimes you get helped by it. This was a great run for us.”

Barney, Poirier, Chuck Hebing and Varin won the heat races. Trombley captured the dash with Jeff Cook taking the win in the B-Main…

Hebing was once again behind the wheel of a Jason Barney owned No. 87…