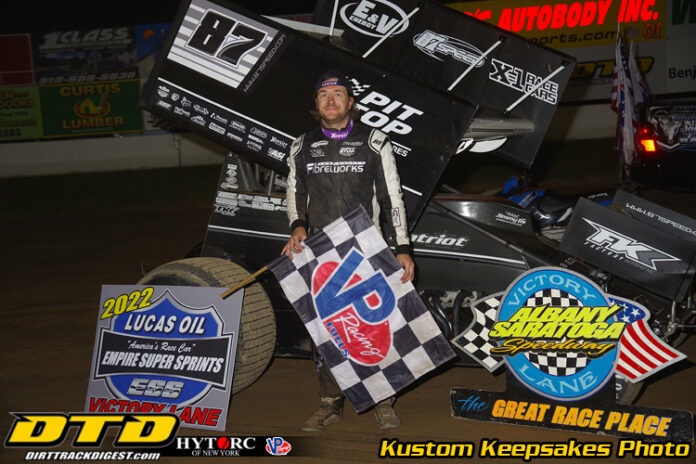 MALTA, NY – Jason Barney has always been fast at the Albany-Saratoga Speedway, but he’s never been able to find his way to victory lane at ‘The Great Race Place’ with the Lucas Oil Empire Super Sprints.

Barney dominated Friday night’s 25-lap A-Main leading everything except the first three laps while on his way to his first win of the 2022 season and the 28th of his career with the club. Barney earned $2,000 for the feature win.

“Last time we were here we hit on something when we came from the back to fifth,” said Barney. “We felt like this place owed us something. We looked forward to it all winter. We came back and I can’t believe we pulled it off. I’m so proud of my guys. They made good calls. We’ve been a touch off this season, but we are still here and there is a lot of season left.”

Tommy Wickham and Brett Wright redrew the front row of the start of the main. Wickham was best off the green flag leading into the opening corner as Chuck Hebing immediately grabbed second with Barney jumping up to third after starting fifth.

Hebing wrestled the top spot away from Wickham before a lap was complete at the exit of turn four. A lap later, Barney did the same to Wickham to put himself in the runner-up position.

It took Barney until lap four to put his No. 87 out in front. Barney went low entering turns three and four before sliding up in front of Hebing for the race lead.

Barney was the leader when the red flag was necessary on lap 12. Wickham and Dylan Swiernik were battling hard for the third position. The pair came together exiting turn four causing Wickham to clip the wall and get over on his side while doing extensive damage to his mount. Both drivers were uninjured, but done for the night.

Barney went to the bottom in turns one and two when the race resumed. He then worked the top of the speedway in turns three and four. Hebing was working the top all the way around the speedway attempting to find his way by Barney.

“I know Chuck was up there and Danny was up there so I had to block any kind of momentum and speed that I could,” stated Barney. “I felt more comfortable on the bottom of turns one and two then driving up to the top and riding the top down the frontstretch to try and break any air or momentum they were getting behind us.”

As the laps clicked off, Barney’s gap over the field began to expand. He was able to put distance between himself and Hebing and third running Danny Varin by continuing to work the inner lane in turns one and two.

Barney’s pace allowed him to find traffic with five laps left in the main. He was flawless over the last handful of circuits allowing him to score his first win of the year.

After starting third, Hebing maintained his second spot in the running order to the conclusion. Varin tried to mirror Barney by running the bottom of turns one and two, but Hebing was too strong on the top of the race track.

Varin, a three-time winner this season, came from the 15th spot in the order the complete the podium. Varin utilized every lane on the speedway to make his way on to the podium. He got to Hebing late in the go a couple times. He just didn’t have enough to power his way around Hebing for the position.

Wright held on to finish in the fourth position while Jordan Poirier advanced from 14th spot to complete the top five.

Varin was the quickest car in timed warm-ups with a lap of 13.851. He was the only driver to break into the 13 second bracket of the 26 cars in attendance.