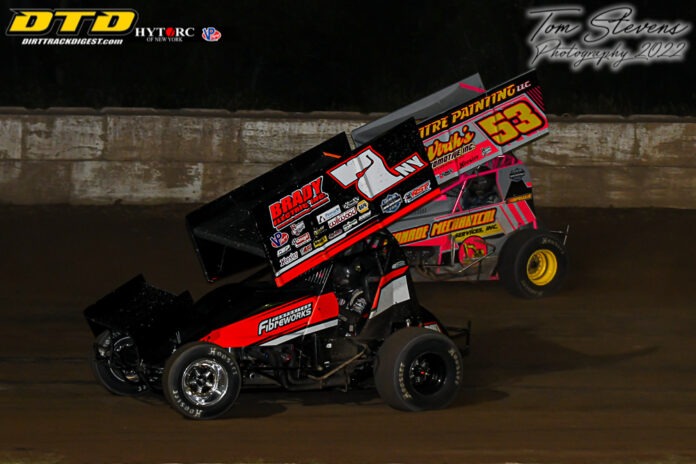 Jason Barney and Paulie Colagiovanni were on the front row for the Empire Super Sprints Ron Lux Memorial, and it was Colagiovanni taking over the lead from the drop of the green flag. The leaders would hit heavy lap traffic by lap 10. The caution would come out on lap 11 as Tyler Cartier, DJ Christie, and Keith Granholm got together in turn two. All three would be able to continue racing. On the restart, Barney would take over the lead. The red flag would come out on lap 17 as the leaders made contact, sending Colagiovanni into a set of barrel rolls down the back straightaway. Matt Farnham would take the lead away from Shawn Donath on the restart as Dylan Swiernik would challenge Donath for second. Moving up through the field and having solid runs after starting deep in the pack were Davie Franek and Jordan Poirier. Franek started 12th on the grid and Poirier started 13th based on winning the Dash earlier in the night. By race end, Franek finished fourth with Poirier finishing in fifth. Dylan Swiernik would take second away from Donath in the late going, but it was Farnham leading the final eight circuits to pick up the popular victory. Swiernik and Donath would round out the podium, finishing second and third respectively.

Brett Senek and Derek Wagner brought the Investors Service Sportsman to the green flag for their feature event with Senek taking off into the lead as Justin McKay took over third, with Dylan Duhow and Scott Kerwin racing in the top five early on. Scott Kerwin would pass Duhow and then pass McKay on lap four to move into the top three. As the top two pulled away from the field, Orval Harris brought out the caution on lap 11 after stopping on the front straightaway. On the restart, Senek would once again show the way as Derek Wagner got pressured by Kerwin for second place.

Curtis Rung and Dave Dussault were on the front row for the Sunflowers of Sanborn Mini Stocks, with Dussault in the lead. Rung’s hood flung open, causing Rung to go into the infield on the drop of the green flag. Dussault would continue to lead as Cole Susice, Chris Leone, and Ryan Plante racing in the top four. Leone would take second away on lap seven and would go after Dussault for the lead. Susice would regain second with five laps remaining after Leone got loose exiting turn two. Dussault would hold off Leone, Susice, and Plante to score the victory.

Greenley George and Tyler Moore brought the Kevin’s Carpet Cleaning Novice Sportsman to the green flag, with George showing the way. Noah Mamo would take over the lead on lap two as Greenley ran close behind Noah. Mamo would go on to score his second straight win. Greenley George would finish in second and Aidan Harris would cross the line in third place. Harris was eventually disqualified following post-race tech for not making the minimum weight at the scales.

Next Friday, June 17th will be the 13th annual Labor Night at the Races to benefit the United Way. A full card of Krown Undercoating Modifieds, Investors Service Sportsman, KiPo Motors Street Stocks, Sunflowers of Sanborn Mini Stocks, and Kevin’s Carpet Cleaning Novice Sportsman will be on the program. Also scheduled will be the Mini Van/SUV Demo Derby presented by Triple T Towing. Pit gates will open at 5:00 pm, grandstands open at 6:00 pm, and racing begins at 7:15 pm.

Did Not Start: Scott Just

Did Not Start: Brian Monahan