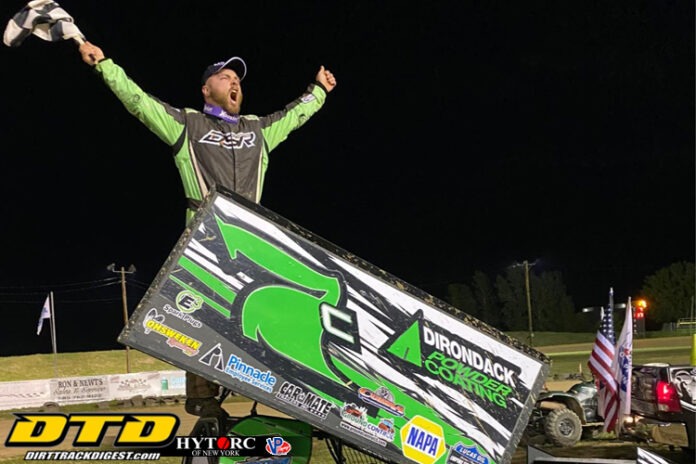 BATAVIA, NY – The fastest laps of the season at the Genesee Speedway were turned on Saturday Night at the Empire Super Sprints invaded Batavia on a Chamber of Commerce Night and the results saw some incredible stories unfold.

Dylan Swiernik’s runner-up finish with the Empire Super Sprints Friday Night at Ransomville was a positive for his team, but he was still looking for one more important position. On Saturday Night, he got the result he was looking for.

Swiernik, of Port Leyden, NY, led all 25-laps of the Empire Super Sprints A-Main to capture his third career win, his first since August of 2013. The veteran not only got the win, he had to hold off some of the fiercest names in the pit area to make it back to Victory Lane.

Swiernik’s first challenger for the lead was Chuck Hebing, who chased him around for the opening five laps as both felt out the track. On a lap six double-file restart, Swiernik’s No. 7c stumbled on the bottom, which allowed “The Cobra” to jump out in front, before the lap could be completed though the caution flag reappared, negating the pass for the lead, and making the next restart single-file due to ESS rules. Hebing would continue to stalk Swiernik, but on lap 22 his No. 45 suddenly slowed on the top of turn two and would be done for the night.

The next challenger for Swiernik was Matt Farnham, who won feature at Ransomville on Friday Night. Farnham was primed for a sweep of the weekend, but an issue with his No. 7NY in the closing laps would drop him from the race a lap early. This would open up the door for Sammy Reakes IV, who drove his way up through the pack using the bottom-line, but would have to settle for second, which was enough to put a smile on his face.

Joe Trenca had the quickest car in hot laps and won his heat, but a ninth place starting spot via the redraw made it a tough road for the driver of the No. 98. He was able to get though the pack running the top line to finish in third, but walked away knowing he was capable of more. Point leader Jordan Poirier’s first appearance at Genesee would result in a fourth while Jeff Cook as able to drive up from his 14th starting spot to round out the top five.

In the weekly divisions, a number of drivers won their second feature of the year, while a few got their first career victory. Bill Holmes was part of the second win crew, as he put on a clinic, leading all 25 laps of a caution-free feature in the late model dvision. Holmes, of E. Concord, was able to dominate in the blackened portion of the track near the top and was able to drive off the win by more than six seconds. Behind the defending track champion was an incredible four-car battle for the runner-up spot, with Dave DuBois fending off Jeremy Wonderling for second. Off the final corner, Jimmy Johnson would narrowly edge out JJ Mazur at the line for fourth place.

It was a similar story in the sportsman division as that race also featured the defending champion leading all 25 laps for his second win of the year. Cameron Tuttle, of Wilson, used the top line throughout the race to dominate the event. Tuttle would slide his No. 35T lower entering turn three but would power off the fourth corner to pull away. Kyle Richner was running in second until lap 19 when he was forced to the infield, while allowed veteran Ray Bliss to finish in second for his best run of the season. Phil Vigneri rounded out the podium in third while Noah Walker and Adam Hilton completed the top five.

Byron Dewitt scored an emotional victory in the Street Stock Feature, as the two-time division champion led all 20 laps to capture his first win at Genesee in more than four years. Dewitt, who had moved to the sportsman division over the last four years, decided to run the street stock solely a few weeks ago to get back to his winning ways and was able to recapture that glory on Saturday Night. The first 16 laps of the feature ran off without caution, as Dewitt paced John Zimmerman, last-week’s feature winner, as the duo pulled away from the pack. On the ensuing restart, Zimmerman showed the nose in the corner, but Dewitt was too strong. A caution on the final circuit would bring the winner back in to question but, once again, Dewitt’s No. 87H was supreme and he would hold off Zimmerman. Dan Schulz would finish in third while heat winner Jacob Vick was fourth. Bill Taylor drove his way up to round out the top five.

James Gayton captured his second mini stock feature win of the season in the final feature of the night. Gayton moved by Olivia Coniber on a lap eight restart and then never looked back over the second half of the race as Coniber would have to settle for second. Caleb Wolcott scored an impressive third place finish while Jessica Schleede and Eric Brumsted rounded out the top five. Point leader Bill Weller Jr. was giving Gayton chase but had a wild spin off the track in turn three but was able to get back up to sixth.

The Novice Sportsman Feature was only 15 laps in distance, but it featured five lead changes, including one on the final lap between two drivers going after their first win in the division. Coming to the checkered flag, the caution flag waved, forcing a single-lap sprint to decide the finish. On that final circuit, Casey Jonathan and leader John Livingston Jr. made side contact entering turn one. Jonathan was able to get in front but entering turn three Livingston made one last-ditch effort for the win, making contact with the left rear of Jonathan’s No. 74, but not enough to spin out the leader. Jonathan, despite being banged up in the sheet metal, was able to hang on for his long-awaited win. Allison Dewitt was able to drive up to second with Bailey Logsdon closely behind to finish third.

One of the most thrilling moments of the night came in the first feature of the night when Morgan Coniber captured her first career win in the Bandit Feature. Coniber, who was caught up in a spin on the second, came back up through the pack to take the lead away with a three-wide pace on lap five to jump out in front. Coming to the white flag though, Coniber’s No. 004 got sideways and allowed point leader Seth Johnson to reel her in. Off the final set of corners, Coniber again got crossed up, setting up a drag race to the finish line, where Coniber was able to hold off Johnson by a matter of feet. Jonathan Logsdon finished a close third in a race that featured five lead changes.

After seven straight weeks of Saturday Night action, Genesee Speedway will return to action on Thursday Night for the special “Light up the Night for Kenzie”, presented Johnson Automotive. The night will feature a special-paying Mini Stock event, fireworks, pro mods and so much more. For more information, visit www.Genesee-Speedway.com.