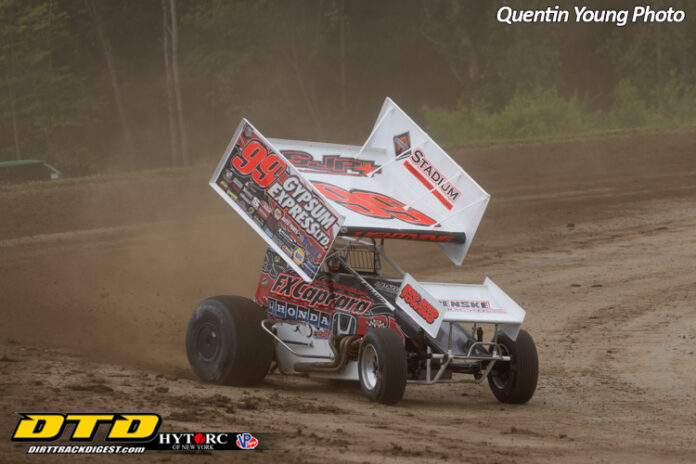 BREWERTON, NY – It might have been his first start of the year, but on Friday night it looked like Larry Wight had been in the seat of a Sprint Car all season long.

Wight dominated the 25-lap Don Gillette Memorial Central New York Speedweek A-Main at the Brewerton Speedway. It was his third consecutive win at track in Lucas Oil Empire Super Sprint competition and it paid him $2,500.

“It’s been about a year since we’ve been in the car and everything fired off really good,” said Wight. “I had Anthony Knighten working on the car tonight. He’s my Sprint Car guru we call him because he knows all about these things. I really don’t get to mess around enough with them to know what changes to make. It’s kind of we throw something at it and see it if works. I let him do his thing and it was on point. I couldn’t really ask for much more than that.”

Wight started alongside Matt Tanner to start the feature on the outside of the front row. He immediately went to the top of turns one and two to take the lead on the opening lap. He remained on the high-side of the speedway during early go before the caution came out on lap four.

Shawn Donath got the jump on Wight on the restart taking the lead as the field darted into turn one. He kept Wight behind him for a handful of laps before Wight used a slide job on lap 10 to regain the first position in turns one and two.

“We were fast enough to get back by him,” commented Wight about the pass. “The rest of the race we were able to keep everyone behind us.”

Two laps later Wight was in traffic while action behind him picked up for third. Donath remained second while Jason Barney and Danny Varin wrestled for the third spot. Varin got by Barney on lap 15 to take the position.

Varin then closed in rapidly on second place running Donath as he raced in traffic. Varin attempted to go three-wide in traffic with Donath and the slower car of Brett Wright. Contact was made that caused Varin and Wright to come together. Wright ended up sitting on top of Varin’s hood to bring out the yellow on lap 16. Both drivers continued.

Wight was true to form on the restart keeping everyone else behind him when action resumed. He again stretched his lead as the laps clicked off. As Wight maintained the lead, Dylan Swiernik began making tracks forward. Swiernik found his way by Barney on the bottom first before driving by Donath on lap 20 to get to second.

When the checked flag fell it was Wight picking up the victory by over three seconds. Swiernik, who has had a tough start to CNY Speedweek, finished in the runner-up position which is his best run of the week. Swiernik powered his way forward by pedaling the car slowly around the bottom.

“We needed this run tonight,” stated Swiernik. “Playing around down on the bottom around the tractor tires is usually not my cup of tea. I’m usually up around the fence. You go to do what you got to do. We have a great handling Panther Frameworx chassis right now. I just want to ride this momentum.”

Barney ended the night in the third position. Barney admitted he didn’t make the right changes to his No. 87 for the slippery racing surface on the night.

“I’m happy to be here,” stated Barney. “I’m happy with third. We missed it a little bit which was completely my fault. We over tightened the car the last two nights, that was my fault too, and we didn’t want to do that tonight and we probably should have. That’s racing. You throw darts at it sometimes.”

Jordan Poirier drove from 11th to the fourth spot with Donath falling back at the end of the feature to complete the top five.