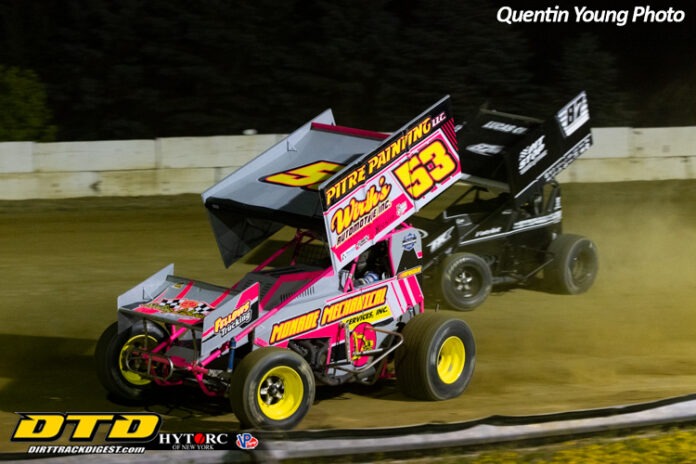 DELEVAN, NY – Shawn Donath has been knocking on victory lane’s door numerous times this season and Friday night at Freedom Motorsports Park the door opened. Donath crossed the threshold four car lengths ahead of the field to park his Panther Frameworx in the winner’s circle. After doing a wing dance, an excited Donath said, “I’m really happy with the way things are going right now and I have to thank my team for their hard work.”

Local favorite, Jared Zimbardi, drew the Pinnacle Pole to lead the field to the green flag. On the start, Zimbardi left room on the inside and Donath, who started third, blasted through the opening to take over first position. Once he took the lead, Donath led all 25 laps while Zimbardi ran the high groove to cross the finish line in second. Zimbardi’s podium finish added to his outstanding night of capturing the Riffenburgh Fast Time award and winnning the first E & V Energy heat race.

While Donath and Zimbardi were up front, there was a torrid battle in positions three through six. Jason Barney, Sammy Reakes, Jordan Poirier, and Dylan Swiernik kept the crowd entertained by making passes on each other low and high lap after lap. There were times during the Lucas Oil feature when this group was two and three wide. Swiernik ripped the top to get around his competitors for third and was awarded the Hard Charger of the race. Point leader Poirier finished fourth and rounding out the top five was Reakes. Sixth through tenth were Jason Barney, Davie Franek, local Kyle Drum, Chuck Hebing, and Jeff Cook, the Cobra Coaches/Mary Ennis Dash winner.