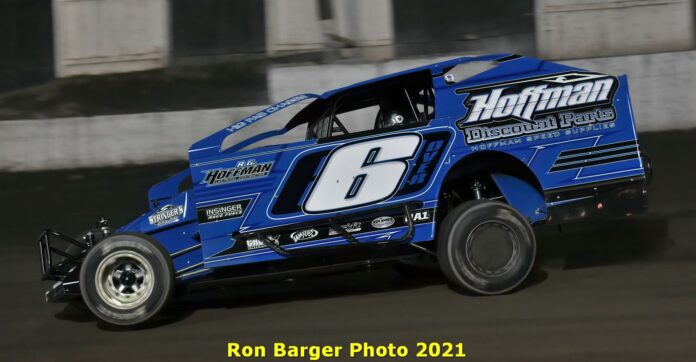 MIDDLETOWN, NY Tanner VanDoren claimed his second Eastern States Weekend Sportsman victory in as many years, coming out on top of a wild 50-lap feature event that saw the 13-year-old take the lead on three separate occasions. VanDoren chased LJ Lombardo across the line after Lombardo slipped by VanDoren in the closing stages, but following post-race inspection, VanDoren was declared victorious.

Joey Bruning spent the early circuits of the 50-lap feature out front of the Sportsman field, with VanDoren and Brian Krummel chasing him early. Krummel started on pole and dropped to third, but utilized an early restart to regain the lead on lap seven. VanDoren pried second away from Bruening on lap nine, but Krummel had already established a comfortable lead.

VanDoren became the third leader of the event on lap 13, using the top to roll by Krummel to lead on a restart. However, Krummel regained the position on a lap 15 restart, with Lombardo the new third-place runner. At halfway, the top two had separated themselves from the field, with VanDoren hanging close to Krummel.

Lapped traffic was thick and frequent, allowing VanDoren to reel in Krummel even more. Using the top of turn one again, VanDoren slipped by Krummel to regain the lead on lap 30. The traffic also aided Lombardo, as he had caught the top two rapidly.

VanDoren went to the extreme top in traffic, a decision that didn’t pay off as Krummel went back to the lead on lap 37. Then, VanDoren pried under Krummel to take the lead back on lap 41. With five laps left, the top three were all nose-to-tail through heavy traffic.

After a brief moment of three-wide for the lead, Lombardo went to second. Krummel slowed to a stop on lap 47, ending his bid for the win and importantly removing the lapped traffic for the leaders. With the restart double-file, Lombardo started alongside VanDoren, with VanDoren on the bottom.

Lombardo got an excellent restart, beating VanDoren to turn one. VanDoren couldn’t stick with Lombardo over the final laps, with Lombardo reaching the checkered first. VanDoren crossed the line in second, but walked out of the tech shed with the trophy and $5,000 winners check. This meant Dave Rogers officially finished second, with Zach Sobotka driving from 35th to third. Jeff Hulseapple and Bruning completed the top five.

“We just struggle on restarts here when it gets this slick,” VanDoren said after what he thought was a runner-up finish. “We need to get momentum going for us to go good, and we didn’t get it that last restart. It was hard to pass in traffic, I kept trying the far top in case they got bottled up on the bottom, but the top was just too far out for our crate motors and too dirty up there.”