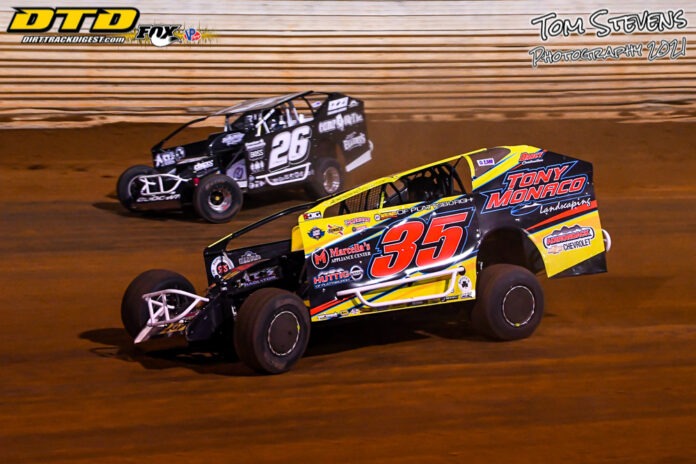 PORT ROYAL, PA – Mike Mahaney kicked off the Speed Showcase 200 with a bang as he picked up the opening night victory with the Bob Hilbert Sportswear Short Track Super Series presented by Sunoco victory at Port Royal Speedway Saturday night.

“This win has been long overdue and It’s just really special to get it down here at Port Royal,” said Mahaney. “I think we’ve got a car capable of winning the big money here on Saturday and this is quite the way to start things out this weekend and I’m just really pumped.”

Ryan Godown and Sammy Martz led the field of 31 cars to the green flag and it was Godown getting the quick jump on the field. Maheny started fourth on the grid and was rounding out the podium at the completion of lap one.

Godown opened up a sizeable lead over his competitors during the opening laps, while Mat Williamson was on the move early as he moved into the fourth position on lap six from his fifth starting spot.

Godown caught the end of the field on lap 12 and one lap later Mahaney slipped by him for the top spot to lead lap 13. However, the caution flew before another lap could be completed when a car slowed on the backstretch.

With the series utilizing double-file restarts, Mahaney chose the bottom for the return to green and the move almost proved to be a mistake as Godown used a head of steam down the backstretch to take back the lead entering turn three. However, Mahaney was not ready to give in and he slid back under Godown for the lead by mere inches at the line.

The move proved to be important when the caution flew the following lap when Dominick Buffalino came to a slow on the frontstretch and thwarted another passing opportunity for Godown.

“Godown is tough to beat and the top was just so good out there,” said Mahaney. “I knew I had to get in front of him as he was kind of using me up there on the starts and I didn’t really like that.”

This time Mahaney took the high side for the restart and Godown was not nearly as fast on the bottom entering turn’s one and two to allow Mahaney to lead comfortably. Meanwhile, Friesen continued his march to the front as he moved into the seventh position with 25 laps remaining.

Seventh-place starter Alex Yankowski used the middle of the speedway to move into fourth two laps later, but otherwise the leaders started to stretch out on track. They again hit lapped traffic with 15 laps remaining and Godown was within striking distance of Mahaney.

He was closing to the tail end of Mahaney’s No. 35 machine when Friesen’s miracle march to the front ended on the front stretch as he came to a slow exiting turn four to bring out the final caution of the event.

Mahaney checked out on the restart, but it was the fireworks behind him that had the crowd on their feet. Williamson saw a hole to get by Godown for second and the two cars made contact coming to the flagstand. Williamson got the spot, but a clearly frustrated Godown didn’t back down and the two nearly made contact again on the backstetch.

Godown briefly regained the runner-up spot with 12 laps remaining, but Williamson again got back by to claim the position for good. Meanwhile, the battling behind him allowed Mahaney the breathing room he needed and he was in cruise control.

He approached lapped traffic coming to the white flag, however it was a case of too little, too late for the field as he took the checkered flag over Williamson by a margin of 1.942 seconds to claim the preliminary night victory.

“This is awesome! Port Royal is one of my favorite tracks and the track was just perfect,” said Mahaney. “I’m really happy to get this win. My guys have been killing it in the shop to get this car ready and I just can’t say enough about the effort.”

Williamson and Godown exchanged words on the frontstretch following the race and the two briefly tussled before being broken up by track and series officials. Godown also showed his displeasure with Williamson coming to the scales when he got into the rear bumper of him too.

“Mike just had a great restart and Godown didn’t really fire and I went to the bottom,” said Williamson. “I’m hugging the wall and he’s pinching me down farther as he’d going backwards at that point. It’s just a shame that we have to go through a rear bumper after the race and he’s mad at me for doing the same thing he does to people at Bridgeport.”

Godown was clearly frustrated with the contact, but said it wasn’t the reason he lost the race.

“It’s just plain spoiled brat and daddy’s money at play,” said Godown. “At that point I had already lost the race as I went to the bottom, but still it’s a shame. We didn’t really talk about anything, but I just pushed him out of the way. If he wants to race like that, we’ve got 200 laps on Saturday and we’ll race that way.”