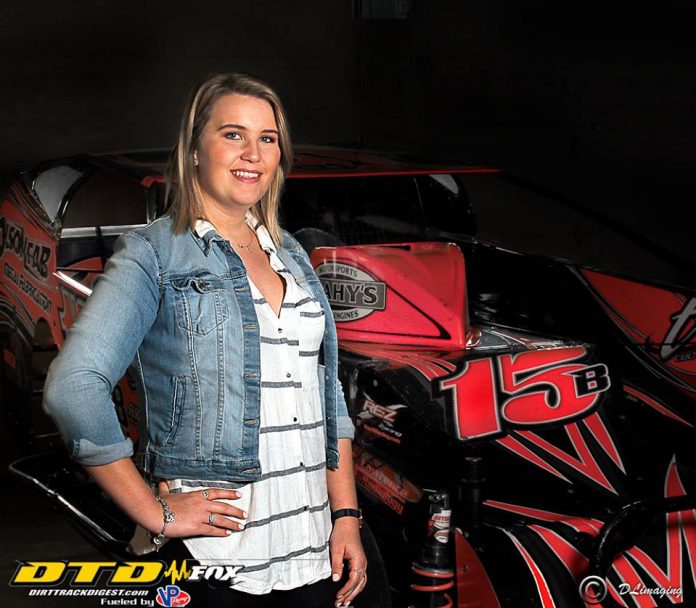 Brianna Ladouceur picked up back-to-back wins in a matter of weeks at the Mohawk International Raceway.

Coming off a difficult year last season, Brianna has a new outlook for 2018 and has definitely come to race this year.

Early in the 2018 season, Mike Ladouceur, Brianna’s dad, decided to change things up in a big way by switching to Bicknell chassis. Mike discussed the pros and cons of doing such a change and Brianna reluctantly agreed at first. She now sees the benefit of this year’s changes.

Along with her new car, Brianna went to the first race with a positive attitude. “Things are looking much brighter so far this year,” Brianna explained. “I was hesitant at first, but am really happy that my dad convinced me to change cars. That first night, we picked up a sixth-place finish. Not bad for the first race in a Bicknell car.”

The following week, she finished ninth but came back stronger on May 29 to take a second-place finish at the Mohawk International Raceway’s Frenchie’s Chevrolet Race, setting the stage for the next two races.

On June 1, Brianna took the 15B car to victory lane, the first win of the season, backing it up by taking the checkered flag once again the following week.

With great results in the last few weeks, Brianna is feeling very good about the race program so far. She is currently running a close second in the points battle with just a few points off the current track champion Jonathan Ferguson.

She explains, “It’s been a long dream of mine to capture a track championship.”

With the way things are going this year, so far this year she may see that dream come true. Stay tuned.