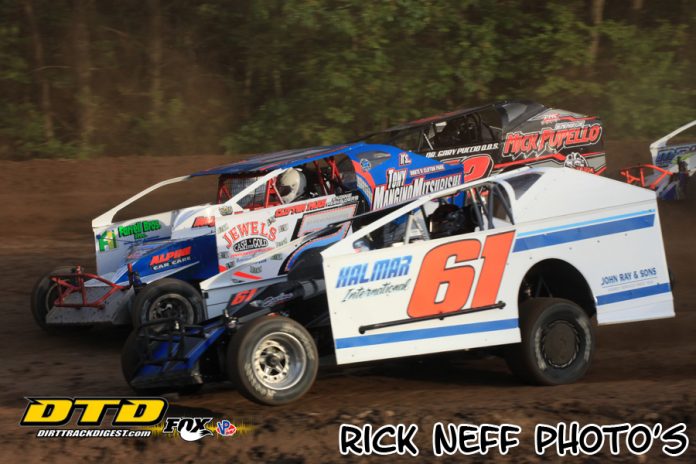 Tribute nights have a way of saluting the deserving while at the same time sparking memories of good ole days of Modified racing.

On Tuesday night, thousands of fans and 44 top notch Modified teams along with 24 Pro Stock entries rolled through the pit gates at the Albany-Saratoga Speedway in Malta to recognize the accomplishments of Jumpin’ Jack Johnson and C.D. Coville.

While many of the younger drivers were not yet racing against the legends, there were four drivers in the pits who talked about their connection with the two legends.

Eastern New York based Kenny Tremont Jr., is a legend and he talked about the two men being honored.

Kenny noted, “Jack was an all around classy guy. He helped me so much in my younger days when I had questions he would answer them. I would trust him with my life, and I have. He is rock solid as a person.”

One of his fondest memories came at the Albany-Saratoga Speedway.

“When I was 23-years-old I won a regular Friday night show over Jack. I had lost belts and had no oil pressure and no power steering,” said Tremont.  “That in itself is tough, but winning over Jack was something else. He was the guy to beat and it was an honor to race with him.”

C.D. was remembered for more colorful reasons a Tremont, like most drivers, knew that Coville wouldn’t give and inch and never quit.

Reflecting on one night at Albany-Saratoga, Kenny said,” There was a pile up and maybe there were 10 cars. It was all quiet, but all of a sudden a motor fired up and there in the middle of the pile up was C.D. trying to get his car out of it and there was no where to go.”

Continuing he noted that he had finished fifth one night, Ray Dalmata third and C.D. fourth and he was talking to C.D. in the pits.

Kenny said, “C.D. said ‘hey did you see Dalmata tonight. He was fast’. I said I had but didn’t notice anything different. He said ‘I hit him four times and he wouldn’t slow down.’

Brett Hearn stood alongside his pit cart and said, “I remember Jack in my formative years. He was such a dominating driver.”

Hearn appreciated the professionalism and one of his top thrills in the sport came on the Moody Mile.

“I was able to beat him in ’85 for my first Syracuse win and it was a really big deal. He is such a legend and that made that win so much more meaningful,” said Hearn. “He was just an awesome driver.”

C.D. also made an impression as Brett said, “He was the full opposite of my style and was full of raw ambition and raw talent.”

Bobby Varin, much like everyone else had nothing but positive thoughts about Jack.

Varin said, “He is the most professional racer I have ever met and he helped me a ton. He gave me a lot of advice and some that I didn’t really want to hear. He was a great racer and taught me the importance of respect out there. He also told me to ‘race them like they race you’.”

Bobby continued, “C.D. simply ran hard and gave it all it’s got whenever he was out there.”

“I paid attention to the lines that both of them ran and I could mimic what they do. I learned a lot of both of them,” concluded Varin.

New Jersey’s Billy Pauch was in the A-S pits as he was a spectator for the night.

Pauch said, “Jack was a gentleman and good racer. He was always fast and clean. I didn’t race against him that much except for Syracuse and the Flemington 200.”

Billy had limited racing with C.D., but there was a memory. He said, “I had a couple of brushes with him at the 200 in Flemington.  Alan Johnson and I were the only cars on the same lap. I came up on a lapped car and C.D. He moved over and I hit the wall. He always drove hard to win and he never quit.”

As the feature rolled off the field was paced by the 12A along with other Jack Johnson and C.D. Coville restoration cars.

It was a tribute to salute two of the best and the fans, drivers and crews felt it was important to be there to say “Thank You” to Jack Johnson and C.D. Coville.