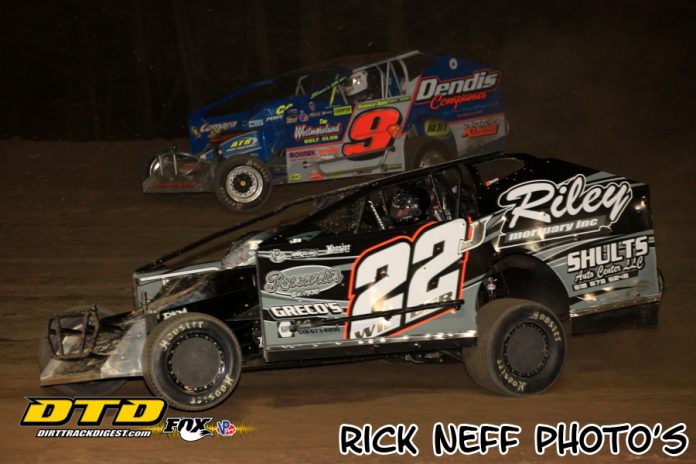 MALTA, NY – On a night when Albany-Saratoga Speedway honored two legends of Northeast modified racing, Matt Sheppard of Waterloo proved once again that, sometime in the future, he’ll be getting tribute nights of his own.

Although he started to have engine problems with two laps to go, Sheppard won the 61-lap Bill Lake Homes-sponsored “Tribute,” which celebrated the careers of Jumpin’ Jack Johnson and “Super” C.D. Coville Tuesday night at the Malta track.

Sheppard, who drew the No. 4 starting position, got the lead on a restart on lap 15, and with the final 44 laps of the race being run under green, opened up a huge lead and appeared to be cruising to an easy win. But as Sheppard took the two-to-go sign, smoke started to come out of the rear of his car, allowing Ken Tremont Jr., who had worked his way into second, to at least get close enough to see the lead car.

But Sheppard hung on for the win, with Tremont second, nearly two seconds behind, and Stewart Friesen third. Friesen got into the spirit of the night, as his Halmar-sponsored modified had new tin to resemble the white Hauser Trucking car that Coville once drove. Friesen even abandoned his normal No. 44 to go with the 61, which was Coville’s number.

“I was glad the race ended when it did,” said Sheppard, who had to be pushed back down the front straightaway for the victory lane ceremonies. “We must have broken an oil line or something. There’s oil leaking all over the place.

“I hemmed and hawed about coming here tonight,” he added. “But to be here to help pay tribute to these two gentlemen in front of a great crowd, it was nice to come away with a win.”

Ronnie Johnson tried to make the night extra special, as he drew the pole for the feature. But he faded to 10th.

“This was a great thing, to honor C.D. and my father,” he said. “I would have loved to win, but that’s not the main reason we’re here tonight.”

Kim Duell won the 25-lap pro-stock feature, recording his first win of the season. Duell was in the right place at the right time. Early in the race, Josh Coonradt, Ed Thompson and Luke Horning, who made up the top three, all tangled in the fourth turn, putting Brandon Emigh into the lead and Duell into second.

Duell, driving the Curtis Lumber Wagon, took the lead on lap six as he passed the flagstand, and had to survive a number of restarts to notch the 50th overall victory of his career.
Tribute Notes: As the field took its pace laps, Johnson dropped back, leaving the pole open in missing-man formation, to honor his former car owner, Bryan Goewey, who died last week.
Heat races paid $150 to win. The bonuses went to Orange County invader Brian Krummel, Friesen, Erick Rudolph and Danny Varin.

Andy Bachetti won the 12-lap Scramble for non-qualified cars, picking up $200, and was also added to the feature at the 31st starter.

The “Tribute” drew a field of 44 modifieds. One of the unlucky invaders was Billy Pauch Jr. Pauch ended up doing a slow roll after climbing over the front end of Rich Ronca’s car during warmups, and failed to qualify for the feature.

Marc Johnson, who was substituting in the Andy Romano-owned modified normally driven by Peter Britten, picked up the Ginny Neff Hard Charger award, which was worth $612. Johnson finished eighth after qualifying through one of the consys and starting 27th.