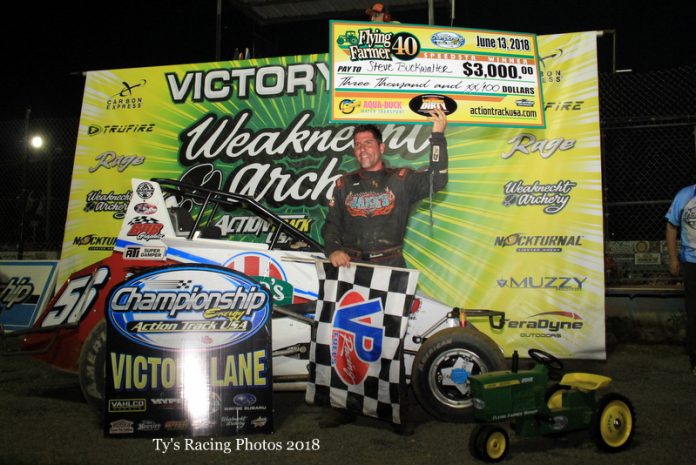 KUTZTOWN, PA  –  Wednesday, June 13 was a night of lucrative, long distance racing and USAC superstars looking to earn some extra cash. It turned into a heart-warming evening highlighted by several drivers who ended seasons of frustration by winning and/or scoring podium finishes. And it all took place at Championship Energy Action Track USA on the Kutztown Fairgrounds.

Steve Buckwalter and his car owner, Bob Swavely, had come so close on so many occasions to earning their first win in the USAC All Pro SpeedSTR division, only to have a mechanical issue or just plain bad luck ruin their chance for victory. The trend came to an end on Wednesday, however, as the Royersford Rocket came on like gangbusters in the final quarter of the Flyin’ Farmer 40, registering his initial SpeedSTR triumph and pocketing $3,000 for his efforts.

Kenny Miller III celebrated his recent high school graduation by winning his first Action Track USA event in the 25-lap main for the Hyper Racing 600 Sprints. And Nick DelCampo rebounded from a devastating late-race mishap, while going for the win, a couple of weeks earlier when he captured Wednesday’s 20-lap feature for the All Star Slingshots.

With seven of USAC’s biggest stars picking up rides in SpeedSTRs (and some pulling double duty in the 600 Sprints as well), the Flyin’ Farmer 40 paid tribute to the memory and accomplishments of Oley, PA’s Tommy Hinnershitz – one of the best to ever wheel a Sprint Car. And Hinnershitz would have been proud of the wildly competitive race presented by the SpeedSTRs on Wednesday.

Allentown’s Briggs Danner brough the field to green with one of the year’s hottest dirt Modified drivers, Anthony Perrego, alongside him on the front row. Danner set the pace for the first seven trips around the progressively banked oval, with Perrego hounding him every inch of the way. The first yellow flag waved with seven down and on the restart, Perrego got the upper hand by blasting around Danner to lead lap eight.

Perrego and Danner waged a nip-tuck battle for the top spot for the next three tours, until four-time USAC Sprint Car winner Tyler Courtney flipped in turn three, his front end landing on top of the wall, placing a temporary hold on the tussle for the lead. On the restart, Danner muscled his way under Perrego and wemt back in front, leading lap 12 as Perrego’s Wayne Subaru began to slow just a bit. His No. 1 coasted to a stop in turn three with 17 complete, bringing out the yellow and ending Perrego’s stellar run.

One lap after the green returned, an eight-car pileup ensued on the backstretch, with some of the division’s heavy hitters involved. When the green waved again, just two laps shy of the halfway point, it was Billy Pauch Jr. who took his turn at unseating the leader. Pauch, the winner on Memorial Day Monday, executed several slide job attacks on Danner, but Briggs was up to the challenge and drove back under Pauch to reclaim the top spot each time. With 15 to go, though, Danner got completely sideways in the third turn, allowing Pauch to scoot by and take the lead in his Heffner Motorsports, Lelands.com No. 27.

With tenth-starting Pauch Jr. in the lead, another caution period re-grouped the field with 26 laps scored. The top four at that point were Pauch Jr., Danner, Ohio’s Matt Westfall, and Steve Buckwalter, who took the original green in seventh. On the restart, S. Buckwalter went topside, rolling the cushion and powering his way past Westfall and Danner to claim the runner-up position with 12 circuits remaining. He then set his sights on Pauch, who was committed to the bottom groove…and that was okay with Buckwalter.

Steve and the leader threw sliders at one another for two revolutions, with Buckwalter shoving his nose in front to lead lap 31. A couple of sliders later, Buckwalter would secure the top spot for good and begin to separate himself from Pauch. With the laps winding down, Westfall challenged Pauch for second and USAC’s Hall of Famer Dave Darland, in the Meisner No. 17x SpeedSTR, got by Tim Buckwalter to run fourth.

At the finish, it was Steve Buckwalter, from Royersford, PA, motoring to the win and, in doing so, kept alive the streak of no repeat winners in the six-year history of the Flyin’ Farmer 40. Pauch held off Westfall for runner-up pay, with Darland winning the hearts of the crowd by finishing fourth. Tim Buckwalter completed the top five.

“I kind of got boxed in on the bottom when the race started,” explained Steve Buckwalter afterward. “It took a while before I found the top, and the car really liked it up there. We’ve broken stuff here so often over the past few years, but tonight she held together. Bob (Swavely) and our crew guy, Dave, spend a lot of time in the shop – at least that’s what they say,” laughed the winner. “I was doubting them because we kept breaking stuff, but seriously, Bob puts a lot of effort into this thing and I’m glad we could finally win one here.”

Pauch was able to smile after the race but admitted he “should have gone to the top a lot earlier to try and hold him (Buckwalter) off.”

Westfall felt he may have had the fastest car on the high side at the end, but “Buckwalter found the top first and he was gone once he passed Billy.”

“This is a really good deal they have going here,” noticed Darland who graciously accepted the accolades from the large crowd after the 40-lapper. “Great crowd, real racy track, and these cars put on a nice show, but they will wear you out; they are a handful but lots of fun,” said “the People’s Champ” from Kokomo, IN.

A skirmish at the start of the Hyper Racing 600 Sprint main forced a complete restart after a few cars tangled in turn one. The next attempt was successful, and laps one through 22 went clean and green as pole-sitter Kenny Miller III showed everyone the fast way around the clay oval. Miller, from Birdsboro, PA and a recent graduate of Twin Valley High School, set a rapid pace, pulling away from Joe Kay, Jay Hartman, and Danny Buccafusca as those three throttle-jockeys fought tooth-and-nail for the runner-up position. Lapped traffic did not deter Miller, either, but the yellow flag slowed his pace and brought him back to the field with three tours remaining in the 25-lap affair.

On the restart, Kay tried to sneak under Miller’s Weikel Sportswear No. 23m, but the leader’s momentum from running the top permitted him to shoot back in front as they launched onto the straightaways. Hartman, the two-time point champion of the 600 Sprints at Action Track USA, followed closely behind as Kay gave it one final shot in turns three and four on the last lap. Miller pulled ahead of him as they exited the fourth turn, flying under Mike Feltenberger’s checkered flag to notch his first-ever win at the Berks County speedway. Miller’s advantage was just under a half-second over Kay, who’s had his share of bad luck over the past few seasons at Action Track USA. Same goes for Jay Hartman, who was very happy to record a podium finish of third, with Buccafusca and Eric Ankiewicz rounding out the top five.

New York’s Nick DelCampo shed a couple tears of joy as he climbed out of his No. 05 Slingshot in Weaknecht Archery Victory Lane after the Slingers’ 20-lap feature. Just a few weeks prior, DelCampo roared off turn four late in the race while battling for the victory. He and Travis Bieber made contact – just a product of hard racing, he said – and it cost DelCampo not only his chance of winning but knocked him out of the race as well.

Redemption came on Wednesday, June 13, as DelCampo led all the way from his pole position starting spot. Kyle Smith wrestled second away from Austin Daniels at the halfway point, then fended off the attacks from Cody Kline as DelCampo pulled away from his pursuers. Kline eventually claimed second with Smith, the strong running Daniels, Brett Bieber, and Dakota Kohler fighting for third through sixth. A caution with three circuits left to run wiped out DelCampo’s comfortable advantage, but he zipped away again on the restart as Kline and Smith ran side by side for the runner-up spot. At the finish, it was DelCampo registering the popular win over Kline and Smith, who both shook off nasty rides in the season opener to score podium finishes. Daniels recorded his best Action Track USA run to date, with Brett Bieber placing fifth.

Another fantastic car count despite a weather forecast that was calling for thunderstorms, as 33 SpeedSTRs, 54 of the Hyper Racing 600 Sprints, and 22 All Star Slingshots produced a total of 108 entries for Wednesday’s program.

The Low Down and Dirty Internet Radio Show teamed up with Aqua Duck Water Transport to offer a challenge to the USAC stars who showed up and to the Action Track USA regulars, too…win any of Wednesday’s A-Mains in Kutztown AND win one of the Eastern Storm Tour’s events for the USAC AMSOIL National Sprint Car Series, and that driver would receive a $2,000 bonus. None of Wednesday’s winners had plans to compete in the six-race Eastern Storm Tour, so the opportunity for the bonus bucks was offered to Matt Westfall, the third place finisher in the SpeedSTR main. Westfall intended to compete in all six of the Eastern Storm events and looked forward to taking the bonus money back to his home state of Ohio.

BusinessLinkPrint.com of Kutztown put up $100 for any SpeedSTR driver who could beat their car driven by Tim Buckwalter. Tim’s older cousin Steve collected on that bonus offer.

Steve Buckwalter made it a clean sweep by setting fast time in the SpeedSTR’s Timed Dashes, stopping the clock in 11.892 seconds for his quick lap. He and Westfall locked themselves into the Flyin’ Farmer 40 as the two fastest drivers in the Timed Dashes. Tim Buckwalter, Dave Darland, and Matt Janisch made up the rest of the Fast Five.

Three heats were run for the All Star Slingshots on Wednesday, with Cody Kline, Dave Carraghan, and Brett Bieber notching the triumphs.

This Sunday, June 17, is Father’s Day, and there’s no better way to treat dad than to bring him to Championship Energy Action Track USA for a terrific tripleheader of racing excitement! The USAC All Pro SpeedSTRs, Hyper Racing 600 Sprints, and All Star Slingshots will compete in qualifying heats, B-Mains, and thrill-a-minute A-Mains.

Sunday is Scout Night, when all Boy Scouts and Girl Scouts who show up in uniform will receive FREE admission. It is also bicycle giveaway night for the younger fans, and everyone will see five big main events for the price of three! The postponed features for the Hyper Racing 600 Sprints and the All Star Slingshots, rained out on June 3, will start the show right after the warm-up sessions at 5 p.m. A complete program of qualifying and feature races will follow the make-up features.

Sunday, June 24, is the date for the last race before the mandated mid-season break, when the speedway makes room for the annual Folk Festival. Racing will return on Wednesday, July 11, following the two-week hiatus.