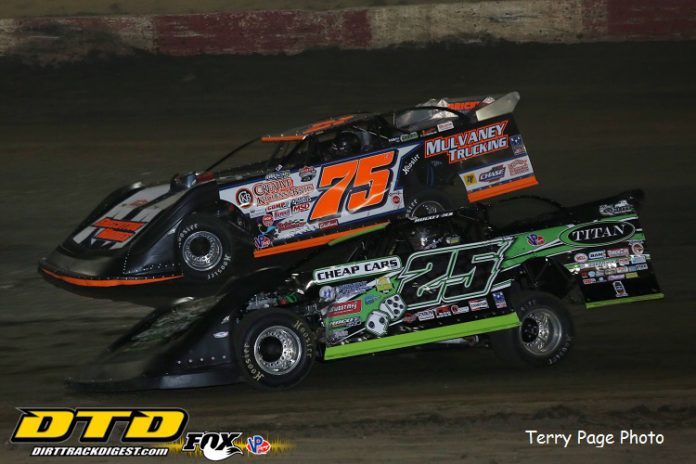 PEORIA, IL — Billy Drake had a hard time believing that his victory in Wednesday night’s 40-lap UMP DIRTcar Summernationals opener at Peoria Speedway was his first on the Hell Tour in nearly 15 years. But it was indeed, throwing the 48-year-old driver from Bloomington, Ill., back to his days as a well-traveled, full-time racer who was one of the Dirt Late Model division’s rising stars.

“Things went right for us tonight. We were able to win that heat race which was critical. The track got a little one lane and we were right where we needed to be,” a surprised Drake said following the feature event. ” We’ve been doing our homework and studying these cars and with the help of Jimmy and Chris Mars we’ve been able to get this car pretty good.

Drake now competes on only a limited basis in an MB Customs machine fielded by Ray Neitner of Peoria, IL, but the talent that gained him several major wins during the 2000s remains in him. He proved it with a flawless performance at his car owner’s hometown track, setting fast time, winning a heat race and leading the Hell Tour’s 2018 lidlifter from start-to-finish off the outside pole without facing a single serious challenge.


Polesitting former Summernationals champion Jason Feger was outgunned by Drake for the lead at the initial green flag and chased his fellow Bloomington resident for the entire distance. But even with five restarts, Feger was never able to draw close enough to make a significant bid for the lead and settled for the runner-up spot, 1.403 seconds behind Drake.

Fourth-starter Brian Shirley of Chatham, IL, moved up one spot on the race’s opening lap and ran third for the duration to claim the final podium spot. Billy Moyer Jr. of Batesville, Ark., lost a position when the feature began and finished fourth while sixth-starter Brandon Thirlby of Traverse City, MI, immediately seized fifth place and went on to complete the top five.