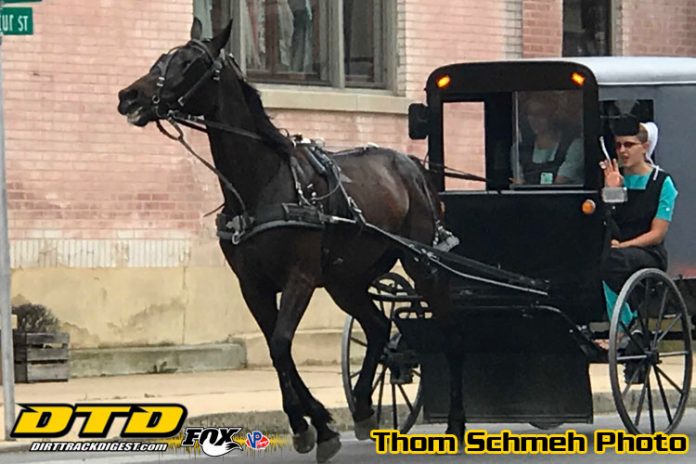 This column will be shorter than most, as I am currently traveling back to Knoxville, Iowa, where I spent 28 years at the National Sprint Car Hall of Fame & Museum; 1989-2008 as executive director, 2008-2017 as curator. This will be my first time back since my life-threatening medical issues last March-April-May and I am very excited to spend ten days with friends who were there for me when I needed their support. On Thursday, June 7, I traveled down to Newberrytown, Pennsylvania, to go to the recently renamed BAPS Motor Speedway, formerly Susquehanna Speedway. On the way down, I stopped and met asphalt modified driver Brian DeFebo in Berwick. He went on to win Saturday night’s show at the Mahoning Valley Speedway in Lehighton.

In 1996, I presented the late Kevin Gobrecht with his well-earned National Sprint Car Poll “Rookie of the Year” award for his efforts in 1995. We remained friends until his tragic death in Greenwood, Nebraska, in September of 1999. So, for me, going to BAPS on Thursday night for the Kevin Gobrecht Classic was very meaningful. And who was the first person I saw upon entering the grandstand area? His mother, Donna, who does a great job in keeping his memory alive with a scholarship fund in his name.

**Did you know that Kevin Gobrecht won the 1999 Historical Big One (HBO) at Earl Baltes’ Eldora Speedway in Rossburg, Ohio, aboard the Dave Blaney-owned, Kenny Woodruff-wrenched, Amoco-sponsored #93 sprint car? He also finished third that year in the prestigious Knoxville (Iowa) Nationals in the same machine, behind winner Mark Kinser and runner-up Danny Lasoski. Blaney, Woodruff, Kinser and Lasoski are all National Sprint Car Hall of Fame (NSCHoF) inductees.** I really enjoyed the night at Scott Gobrecht-promoted BAPS, as there were full quality-laden fields in both the winged 410-cubic-inch sprint car and the Super Sportsmen fields. Lance Dewease, driving for Don Kreitz (Jr.) and wrenched by Davey Brown (Sr.), was inducted into the National Sprint Car Hall of Fame the previous Saturday, joining both Kreitz and Brown. Dewease claimed the $4,900-to-win Kevin Gobrecht Classic, which was his twentieth victory at Newberrytown and his 330th career feature win. He was followed by Memphis (Tenn.) State graduate Greg Hodnett, Danny Dietrich, Brock Zearfoss and former All-Star Circuit of Champions (ASCoC) regular Ryan Smith, respectively. Scott Dellinger won the Super Sportsman feature over Frankie Herr of 1993 Racing Champions 1/64-scale die-cast fame.

**Did you know that, according to Kevin Eckert, the former Susquehanna Speedway in Newberrytown, Pennsylvania, was once known as Midway Speedway? Will White indicates that it was likely named that as it is approximately midway between Harrisburg and York.** On Friday, June 8, I again went to the Eastern Museum of Motor Racing (EMMR) in York Springs, Pennsylvania, to do more research on the National Auto Racing Association (NARA) in the Fifties. And, once again, I was greeted by the friendly faces of NSCHoF inductee Lynn Paxton, librarian Stephen Bubb and volunteer Tim Stitely. This time, they were joined by fellow volunteer and vintage race car collector/restorer Marlin Heller. That evening, I again ran into the same Bubb at the Trail-way Speedway in Hanover, which was a new track for me (#386). The winged 358-cubic-inch sprint cars were out in force, with twenty present, and an equally-impressive crowd by local standards. Glenndon Forsythe won his first-ever main event at Trail-way, followed by Cody Fletcher, Joe Trone (Jr.), Dylan Norris and Chris Frank, respectively. All-in-all, Trail-way was a very fan-friendly facility for grass-roots racing. Also on the card were 270cc Micro-Sprints, Street Stocks and Limited Stocks (weren’t those Four-Cylinders, a.k.a. Mini-Stocks back in the day?). And, like the BAPS Motor Speedway, Trail-way has hand-railings for those that need them getting up and down the steep grandstands.

**Did you know that, according to kevingobrecht.com, Kevin Gobrecht won track championships at the Trail-way (1990, ’92) and Hill Valley (’92) tracks in the 270cc Micro-Sprint class?**

On Saturday, I toured Amish country with my family, sister Ruthanne and her husband Dick Orth, and their son Dan and his wife Kori (and their kids Nolan and Evelyn). We went to Shady Maple Smorgasbord in East Earl and the Strasburg Railroad in, well, Strasburg and Paradise. Both attractions are well worth the effort to visit.