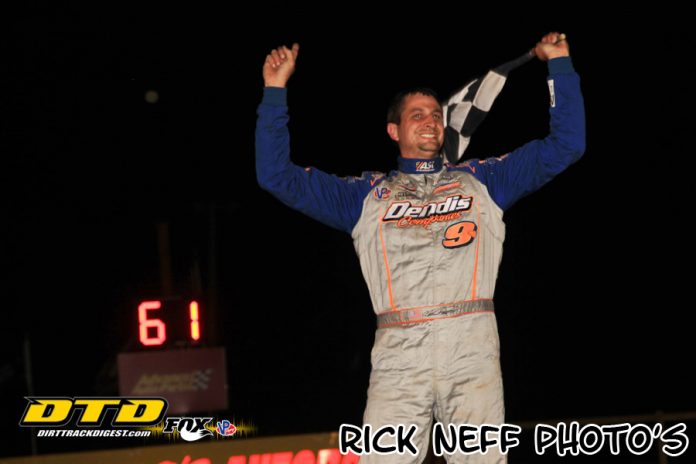 The Waterloo, N.Y., driver picked up his 16th win of the season on Tuesday night in The Tribute at the Albany-Saratoga Speedway. Sheppard dominated the 61-lap affair pocketing the $6,112 winner’s share. Sheppard wasn’t even sure if was going to attend but decided to make the tow to the Capital District. He indicated afterwards that the deciding factor for being in attendance was to honor legendary drivers Jack Johnson and C.D. Coville.

“Those two gentleman were the big deciding factor,” he mentioned about the legendary duo. “We decided to be here and pay tribute to them.”

The win helped take away some of the sting of Sheppard’s opening day loss to Tim McCreadie back in April where he missed out on a $7,500 payday on the final lap. McCreadie went by him on the outside for the win.

“I guess I learned where the top was a little bit,” said Sheppard. “Me and Timmy (McCreadie) had a heck of a race and he ended up beating me out. It is a little better to be in victory lane. Timmy beat me on the top so I figured I’d stick to the top tonight.”

The top lane is usually not one that Sheppard prefers as he wins most of events making up ground on the bottom of the race track. Tuesday night he had no choice but to run on the high-side as he didn’t feel comfortable down on the bottom.

“I guess I’m not really accustomed with running up there on the top,” mentioned Sheppard. “For whatever reason my car didn’t want to hook up on the bottom. I have no idea why. It was kind of scary. I didn’t have much choice but to move up top. I honestly think we had a much better car the last time we were here. Funny how that works out that tonight we ended up in victory lane.”

The race wasn’t without incident for Sheppard as his No. 9s Bicknell mount started smoking during the final circuits of the event. Even after the feature concluded he wasn’t exactly sure what it was.

“We were fighting a couple things right there at the end,” stated Sheppard. “Our right rear tire was going flat and we got oil leaking out of the engine somewhere. The light started blinking the last few laps. I took the checkered and it was blinking on and off. I saw the oil pressure getting low so I shut it down. I’ll have to figure out what is wrong with it.”

Not the Combo Friesen was Looking For

Stewart Friesen went with a retro paint scheme on the night driving a Coville themed No. 61 for the event. The Halmar International Racing driver had a solid outing finishing in third. He wasn’t happy with the setup choice the team went with afterwards as he was off. He just couldn’t get the bite he needed.

“We tried a little bit different combination there and it wasn’t the answer obviously,” cited Friesen. “I know what it was. We’ll just get back to what we won with at Weedsport. We tried a different combination and just buzzed the shit out of the tires all night long. We didn’t put it to the track like we needed to. It was fun buzzing up there on the cushion, but that was all I could do to keep it wound up.”

The retro doors panels off of Friesen’s car will be available to a couple of lucky fans.

“It was so cool running the 61 tonight for C.D.,” said Friesen. “One of them is going to go to the highest bidder and the other one will go to the raffle winner where the proceeds go to The Crossroads Center for Children. That is a really good deal. We didn’t tear it up too bad so they’ll get something that is mostly straight.”

Varin Struggles to Find His Groove

Like Friesen, Danny Varin had a good run but he wasn’t happy with just finishing in the top five. He wanted more but admitted the team is struggling to find what it needs to get better.

“We are happy, but we’ve been running like crap,” stated Varin. “We aren’t happy with the car. We are leaving something on the table and I don’t know what it is. I don’t even know what to say. I don’t feel like I got it. We’ve gone from one extreme to the next. We are just missing it.”

On this night he started the race on the top groove of the speedway before electing to try and make the bottom work. That proved to be the right decision as he was able to make up ground in the closing laps, even battling with Friesen for a shot at a podium finish before settling for fourth.

“I had a pretty good rhythm on the bottom,” he said.  “It was just the lapped cars got pretty bunched up.  He (Friesen) was a little more versatile than me.  He could roll the outside a lot better than I could.  We were good, but I don’t have enough side bite.  I was sticking it in the brown on the bottom or sticking it in the brown on the top.  The top just got too far out there.  I put it in the wall a couple times just trying to go fast.”