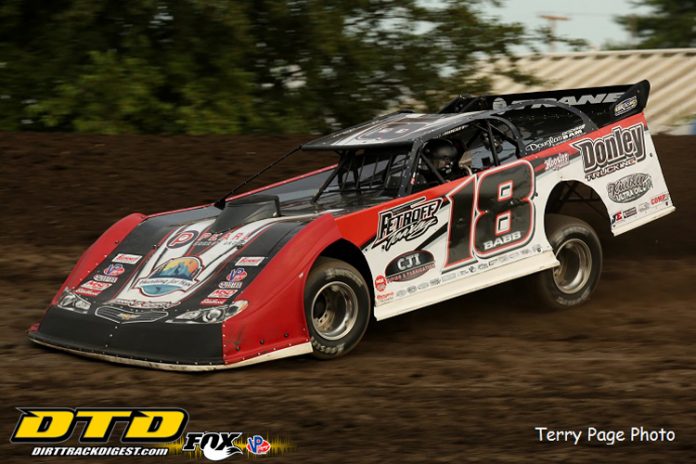 “It does get me fired up,” Babb said when asked about engaging in high-stakes racing with Moyer, a Hall of Famer who served as a mentor to Babb earlier in his career. Babb, 44, of Moweaqua, IL, used his burning desire to outrun Moyer to his advantage in the A-main, which he won after swapping the lead four times with his 60-year-old rival from Batesville, AR, during a titanic clash of Summer Nationals titans that lasted more than half the race.

Moyer nosed ahead of Babb using the inside lane to lead laps 13 and 21, but on each occasion Babb surged back in front the following circuit. After Babb regained command for good on lap 22 he soon began pulling away from Moyer and ultimately beat the Hell Tour’s all-time winningest driver by 1.476 seconds for his first series triumph of 2018 and a $5,000 payday.


Brian Shirley of Chatham, IL, who started from the pole position but was outgunned for the lead at the initial green flag by his front-row mate Babb, finished a distant third. Rusty Schlenk of McClure, Ohio, inched forward from the seventh starting spot to place fourth in his C.J. Rayburn house car and 2011 Kankakee Summer Nationals winner Mike Spatola of Manhattan, IL, improved one position from where he started to complete the top five.