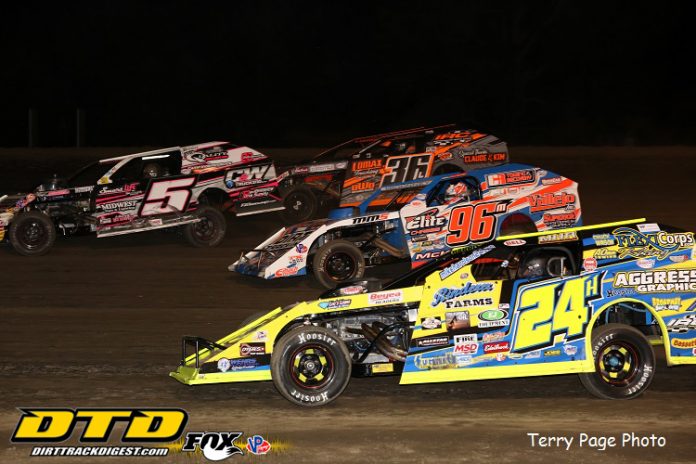 KANKAKEE, IL — Once again Highland, IL’s Mike Harrison brought home the Summit Modified Nationals victory in commanding fashion. In what could be considered “the move of the night”, Harrison jumped to the lead on lap 1 and never looked back on his was to his 2nd victory in 2 nights.

“I knew the first last was going to be the most critical lap. We went into the race with a game plan and it paid off. We were able to get out ahead of everyone before they got rolling and it worked out. I saw McKinney coming on the bottom and wondered if I needed to get down there but it all worked out,” Mike Harrison said when asked about his strategy going into the feature event.

Mike McKinney finished in the 2nd position in another strong showing by the Plainfield, IL native. McKinney mounted a mid-race charge on Harrison on the bottom half of the track. Jamie Lomax of Lake Village, IN overcame motor issues from earlier in the week with a strong 3rd place finish in the feature event. Tyler Nicely and Donovan Lodge finished out the top 5.