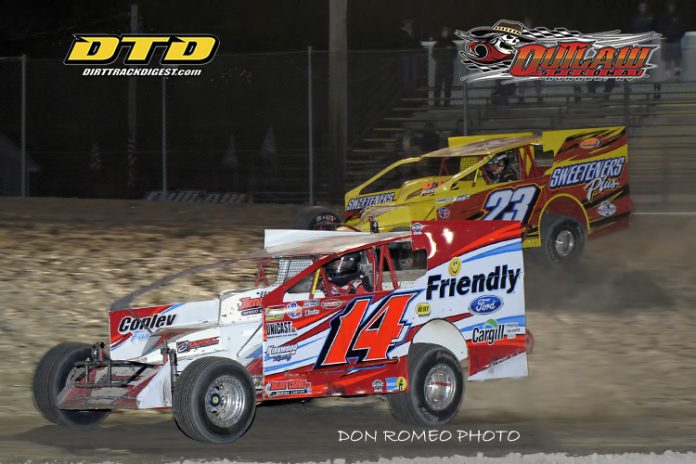 In the Friendly Dodge/Chrysler/Jeep/Ram Outlaw Modified feature, Alan John started 12th and worked his way forward in the first half of the event. Johnson made an incredible 3-wide move splitting Eldon Payne and Kyle Coffey on the way to the lead, and once out front, he pulled away for his second win of the year. Eldon Payne and Kyle Coffey continued to battle for second, with Payne getting the spot at the finish. Steve Paine and Eric Fisher rounded out the top five.

Dale Welty had not visited Victory Lane yet at Outlaw Speedway in 2018, but Friday proved to be his lucky night, as he passed leader Mike Buchanan on lap 9 and brought home his first win of the year. Tom Collins Jr. was close behind in second, followed by Karl Comfort, Brian Fish, and Brandon Butler.

The Marion Decker Agency IMCA Modified main event went green to checker with Brad Smith holding off defending track champion Shawn Bruce for the victory. The win for Smith was a special one after suffered a severe injury during the off season that put his racing career in jeopardy. Brandon Smith, Will Ward, and Rodney Morgan took the remaining spots in the top five in the caution-free affair.

The Street Stock division found a defending track champion on top in the feature, as Glenn Whritenour held off strong challenges from Dave Matwiejow and last week’s winner Quinn Sutherland for the checkers. Gene Balmer and Jared Hill finished behind Sutherland in fourth and fifth.

In the 4 Cylinder feature event, a new winner was produced as Shawn Gleason broke free from the pack early and pulled away for his first win of the year. Chris Woodard and Adam Austin gave chase, but could not catch him and had to settle for second and third. Jeremy Bunn and Ray Hyer crossed the line fourth and fifth, but were disqualified.

The Marion Decker Agency Hobby Stocks also produced a first time winner for 2018 in the form of Eric Williams. Williams was able to pass Justin Eldridge for the lead, then held off Marc Minutolo to take the win, followed by Eldridge, Allison Pierce, and Dave Decker.

Austin LaBar was once again the winner in the Winner’s Circle Deli Bandit division.

This Wednesday night, Outlaw Speedway presents the return of the Short Track Super Series for Modifieds, plus the next round of the Outlaw Sportsman Series and Street Stocks. Racing begins Wednesday night at 7pm. There will be no racing at Outlaw on Friday, June 22nd in observation of area high school graduations. For more information, visit www.outlawspeedwayllc.com