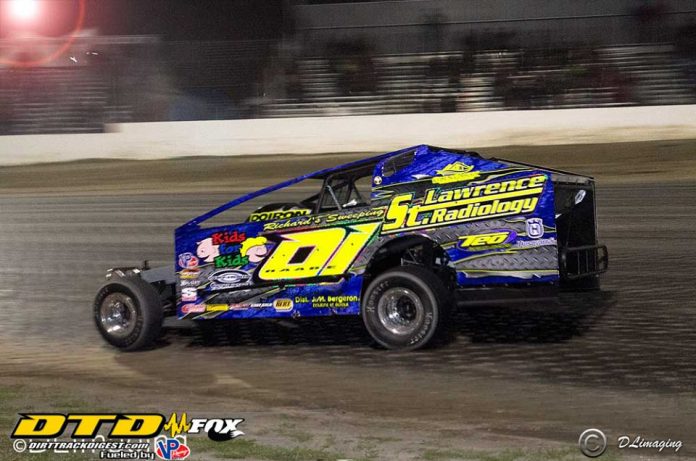 AKWASANE, NY –  Long time supporter of the speedway Brass Horse was on hand for a full night of racing this past Friday night at the Mohawk International Raceway. All 5 divisions were ready for action and with the Twin Leaf Convenience 358 Modified division back after a week off, they were refreshed and ready to put on a show.

When the green flew to start the Twin Leaf Convenience 358 Modified division a scary moment happened in turn 2 as Lance Willix and Jeremy LaSalle made contact sending LaSalle airborne off the backstretch. LaSalle was able to continue but had to come from the rear. It is was a family affair at the front of the field as John and Madison Mulder led the field to a 2nd green flag with the younger Mulder getting the lead in turn 1 over John Mulder, Joey Ladouceur, Chris Raabe and Larry Welling Jr. After getting to victory lane 1 year ago Madison showed his muscle early on as he pulled away from the field but Joey Ladouceur would have something to say about that as he charged to 2nd and reeled in the leader. On lap 3 Ladouceur used the bottom lane to take over the top spot and begin to open up a commanding lead. With Ladouceur on front 2018 Memorial Cup winner realized he had to get going, and he did just that as he took over 3rd from John Mulder on lap 6 then took 2nd from Madison on lap 7. One lap later Joey Ladouceur’s comfortable lead had been reduced significantly as Raabe made a bid for the top spot in a classic side by side battle. On lap 9 Raabe made the move taking the lead away with Ladouceur, Matt Woodruff, Madison Mulder and Carey Terrance completing the top 5. At the halfway point it was all Chris Raabe as he had well over a straightaway lead but Matt Woodruff was the talk of the night. After sliding backwards at the initial green flag Woodruff continued his march forward as he took the 3rd spot on lap 16 and then with some patience was able to charge by Joey Ladouceur on lap 22 for 2nd but needed a caution to catch Raabe. It would not happen as in the end Chris Raabe was in beast mode on this night, as he drove away from the field to notch his 2nd win in a row. Woodruff, who won his first feature on dirt last week at Airborne came home 2nd over Joey Ladouceur, Carey Terrance and Larry Welling Jr.

The 25 lap Crossroads Tobacco Sportsman division was ready to go and so was veteran Bruce Makinson as he took the lead from his pole starting position over Jamy Begor, Greg Snyder, Brent Kelsey and Mike Stacey. Makinson had not won in a long time at Mohawk and appeared ready to head to victory lane as he drove away in the early laps as the major battle was taking place from 2nd on back. Greg Snyder Brent Kelsey, Brianna Ladouceur and Ricky Thompson were all having a great battle for position but in the process they were also letting the leader Makinson drive away to over a straightaway lead by lap 8. Brent Kelsey was the first driver to break free of the pack as he took 2nd from Snyder bringing Brianna Ladouceur with him to 3rd over Snyder and Thompson. Lapped traffic was starting to come into play on lap 11 as Makinson continued to lead but Kelsey was quickly running down the race leader with Ladouceur now 3rd over Thompson and Snyder. At the halfway point lapped cars were making it difficult for Makinson which played right into the hands of Brent Kelsey. On lap 16 coming off turn 2 Kelsey made his move for the lead and began to pull away. Brianna Ladouceur also was on the move as she took 2nd the following lap and ran down Kelsey and was looking for her 3rd win in a row. Over the remaining laps Ladouceur tried several times to get by on the bottom and had a shot with 5 to go but couldn’t make the pass work. On this night it was an emotional one as Brent Kelsey charged home for his first win of the season at Mohawk, an emotional Kelsey dedicated the win to his mother, who passed away 2 weeks ago. Brianna Ladouceur would settle for 2nd with Robert Delormier making a big move to 3rd at the checkered flag, Zach Arquiett came home 4th in his first start of the year with Cedric Gauvreau 5th.

In Green’s Performance Mod Lite action it was Nick Mallette charging to the front of the field early on and was looking to get back into championship form. Mallette led early on over Dan Reif, Styles Arquiett, Brad Reif and Harley Brown. With a fast race track everyone was loving the inside groove on this night and Nick Mallette was refusing to leave the bottom lane but Dan Reif was making several attempts to get by the defending track champion, but was not successful in the early going. On lap 10 Brad Reif would spin his machine on the back stretch bringing out the caution. When the green flew it was Mallette in control but Reif was right there to challenge with Harley Brown coming into the picture taking position number 3 from Styles Arquiett and the battle was on. Over the remaining 4 laps Dan Reif did all he could to try and take his 2nd in a row but Nick Mallette proved to be too strong as he marched on to become the 4th different winner in 4 races in Green’s Performance Mod Lite action. Dan Reif crossed in 2nd over Harley Brown, Styles Arquiett and Brad Reif who charged from the back to take 5th.

Novice Sportsman has had a quality field in 2018 and on this night it was no different. Despite a couple of early race jingles Kurt Russell was the man in charge of the field as he led in the early going over Brian McGinnley, Corbin Millar, Jason Rose and Josh Laware. Russell did not have an easy time as Brian McGinnley was lurking on the bottom for the lead while behind those 2 drivers Jason Rose and Corbin Millar were having their own war for 3rd and 4th in a tight 4 car battle. Russell was able to hold on to the lead but Brian McGinnley refused to go away. On lap 13 Jason Rose saw his shot at a top 5 finish go away as he slid off turn 2 and ended up near the tree line and the red flag was displayed. Despite being stuck in the mud Jason Rose was towed out and was able to restart at the rear ending up 10th at the finish. On the final restart Kurt Russell stuck to his game plan as he held off a determined Brian McGinnley to become the 5th different winner in as many races at Mohawk. McGinnley crossed in 2nd over Millar, Dale Gonyo and Josh Laware.

The Bandit class is always a great show to watch and veteran Gary Sharlow was not about to take a back seat to anyone as he charged into the lead in the opening laps over Nick Perham, RJ Tressider, Mike Pecore and Anthony Law. Sharlow who won 1 feature in 2017 was looking strong on this night but Perham, Tressiber and Pecore were making it difficult on him as they stayed within striking distance. As the laps wound down Nick Perham did all he could do to get by but Gary Sharlow would pull away in the remaining laps to score his first win of the season in Bandit action. RJ Tressider made a big move to take the 2nd spot at the checkered flag with Mike Pecore, Nick Perham and Anthony Law rounding out the top 5.

Next Week G&R Auto Parts will be on hand along with Adirondack Auto for a full show in all 5 classes with the first green flag dropping at7:30pm. For the latest news and up to date points, results and anything else that is going on at Mohawk, log on to our website atmohawkintlraceway.com or follow us on Facebook and Twitter.