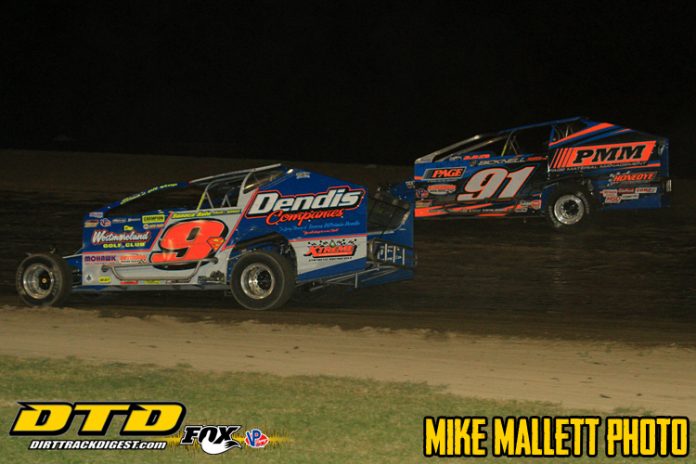 Matt Sheppard hasn’t been a regular at Brewerton Speedway in two years, but one would never know it given his dominating performance in the Super DIRTcar Series feature. It was another $6,000 payday for the Waterloo, N.Y. as he was untouchable in the Showdown at Sundown.  The win was Sheppard’s third Super DIRTcar Series win in a row at the track, also winning the September events of 2016 and 2017.

“It’s nice to come back to Brewerton and park it in victory lane,” Sheppard said. “My car was really good on the bottom for most of the race, but towards the end I kind of felt the track change a little bit. We’ve had a good week so far, when you get on a hot streak you have to ride it as long as you can because you never know when it’s going to end.”

Sheppard took advantage of redrawing the pole, taking off at the start of the 100-lap feature. Lapped traffic was early and often for Sheppard, as he reached the tail of the field on lap 10. Willy Decker drew even with Sheppard for the lead in the first batch of lapped cars, but to no avail as Sheppard held on. A couple laps later, the unrelated Deckers went to war over second, with Billy Decker taking that spot.

On lap 17, Larry Wight slowed to draw the first caution of the race. In the pits, Wight’s crew took a brief look under the hood and then called it a night. Back on track, Billy Decker got a great restart, drawing even with Sheppard at the quarter mark of the race.

With 25 laps in, Sheppard now faced his second challenger with the last name Decker, but the No. 9s got rolling once more and pulled away. Behind the top two, Jimmy Phelps rolled comfortably in third while Danny Johnson had clawed from 12th to fourth. A lap 44 caution for Danny Varin slowing erased Sheppard’s lead and gave Decker another chance.

The restart was as close as anyone was getting to Sheppard for the rest of the night. Lap after lap, the distance between Sheppard and Decker grew, with the margin reaching a full straightaway by lap 65. Decker soon felt pressure from Jimmy Phelps for his second spot, while Danny Johnson was being worked over by Erick Rudolph for fourth.

With the lap counter passing the 80 mark, Sheppard’s lead had stabilized at just under half a track. Lapped traffic now consisted of fast cars such as Tim Fuller and Brett Hearn, making Sheppard actually use effort at times to pass them.

However, it didn’t deter Sheppard whatsoever, as the defending Super DIRTcar Series champion took a Friday night cruise to victory lane with a dominating wire-to-wire victory over Billy Decker and Jimmy Phelps. Danny Johnson came out on top of the brawl for fourth, beating Erick Rudolph to the line by a matter of feet.

Justin Williams continued to make the Mod-Lite division his high speed playground, going 4-for-4 on the year. While it looked like Williams may have a couple challengers in the opening laps, Williams had none of it and walked away for another win.

Nick Krause and Rich Townsend were battling for the win in the first Sportsman when the two made contact with a matter of laps left. The door-to-door contact wasn’t extreme, but it was enough to send Townsend into a yuke tire and Krause to the tail of the field. This handed the lead to Chris Cunningham, who held off Joe Abbass and Chris Mackey to claim his first win at the track.

Tyler Thompson got to the lead rather quickly in the second feature, but on lap seven, the generator decided it was time for everyone to go home. With no lighting around half the track, officials had no other choice than to postpone the final feature of the evening. The remaining 18 laps will be completed next week.

(SUNY Canton DIRTcar Sportsman #2 – 25 Laps) – Stopped on lap 7 due to generator issues and will be finished on Friday, June 22.