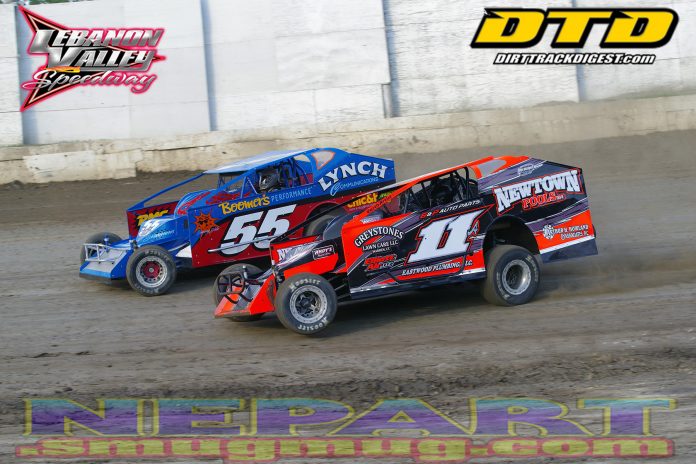 WEST LEBANON, NY – Near-perfect conditions for racing greeted competitors on Saturday night at Lebanon Valley. The result was a rather rough-and-tumble night on the high banks. However, that wasn’t necessarily so in every feature.

Kyle Armstrong has struggled with flat tires recently. The issues have plagued his season to the point that he ended up with the pole for the Modified feature. He took advantage of his good fortune.

Armstrong was able to open up a decent gap over the rest of the field. Andy Bachetti was able to quickly pass Rob Pitcher for second but could not keep pace with Armstrong. Further back, Brett Hearn was having some trouble moving forward from the 15th starting spot. While he eventually finished seventh, he would not be a factor on this evening.

As the race wound on, the brakes on Armstrong’s No. 11a began to fade. That allowed Bachetti to close the gap. Behind the two leaders, Pitcher and Brian Berger were fighting hard for third. The battle eventually went to Berger, but only because Pitcher was forced to retire due to a mechanical issue.

In the closing laps, Bachetti and Berger closed right up on Armstrong. Bachetti looked to the inside of the New Milford, Conn.-native multiple times, but simply could not get past as Armstrong held on for the win.

“Our car was really, really good tonight,” Armstrong said afterwards. “I was trying to take it easy [after the brakes started to fade], but then Andy [Bachetti] got to us. I knew it was time to pick the pace back up.”

In the Small Block Modifieds, Alan Houghtaling started from the pole and battled early on with Dillon Steuer. After fending off the teenager from Long Island, Houghtaling was able to extend his advantage. Meanwhile, Kenny Tremont Jr. and J.R. Heffner were making their moves further back in the pack.

A caution on lap 15 when Nathan Johnson spun brought everyone back together. Steuer ended up in a fierce battle for second with Frank Harper. The two battled side-by-side until Harper ended up hitting the wall in turn 3. Chad Pierce, who was fourth at the time, spun to avoid Harper. He was collected by Brett Haas.

On the restart, Tremont was able to get past Steuer for second and quickly ran down Houghtaling. With less than five laps to go, Tremont went for the lead on Houghtaling and made it stick. From there, Tremont pulled away to take his 30th career Small Block win at the Valley.

Heffner ended up second, followed by Steuer in a career-best third. Harper and Houghtaling rounded out the top five.

The Sportsman class saw Houghtaling lead once again from the pole, this time with Nikki Ouellette giving chase. After an early caution due to spins for Harold Robitaille and Scott McCoy, Chris Lynch made his move.

He quickly dispatched of Ouellette for second, then took the lead away from Houghtaling on lap 6. From there, he was gone. Having only won twice before, Lynch explained afterwards that he didn’t want to take any chances, so he kept his foot planted.

Regardless, Lynch ran away from the field to take a very satisfying victory. Whitey Slavin finished second, followed by Ted Teal. John Virgilio was fourth, followed by Ouellette.

Pro Stock teams competed in the Bubba Tanner Classic Saturday. A special 23-lap distance (based on the number Tanner ran) was in place. The action lasted for far more than that.

Joe LaFlamme started from the pole and ran well early on. Behind him, the wrecking started. First, Rich Colasanti and Brian Keough spun in turn 3. Just after the restart, a crash broke out on the backstretch that eliminated Scott Kilmer while damaging the cars of Nick Hilt and Steven LaRochelle.

Another crash in turn 1 damaged LaRochelle’s No. 178 for a second time, along with Dave Stickles. While LaRochelle pitted and had his nose ripped off, Stickles was done for the evening.

Through that, LaFlamme held onto the lead. On the restart, Frank Twing was able to stick his nose to the inside and take it away. Not too far behind was Rob Yetman, who had started 15th and avoided all of the chaos.

After another yellow, Yetman was in second, right on Twing’s tail. It didn’t take long for Yetman to get to the inside and take the lead exiting turn 4 on lap 16. From there, Yetman pulled away to take the win.