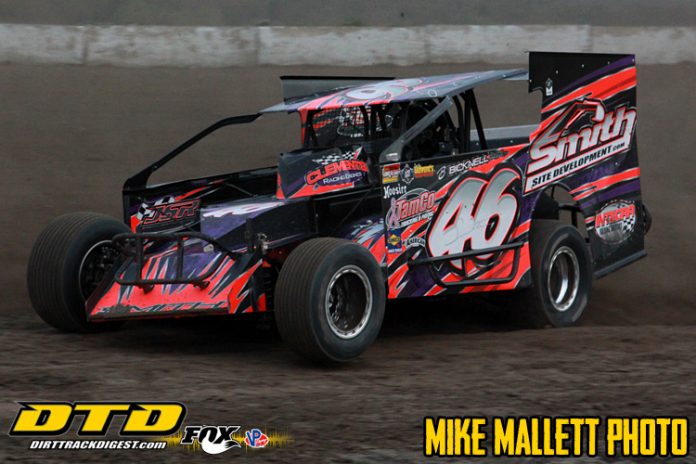 CENTER LISLE, NY –  A crystal clear and sunny Saturday afternoon greeted the 131 race teams and the hundreds of fans that had checked into the speedway overlooking the green hills of Center Lisle. Fan Appreciation Night festivities preceded the racing action and included a visit from a WBNG Channel 12 news crew who had come to produce a segment featuring the many lady racers who take part in competition on the mountain. Fans of all ages enjoyed mixing with their favorite drivers as they collected autographs as well as various goodies and giveaways from the race teams in attendance. The Classics on Dirt Stock Car Club was also on hand to take the Thunder Mountain patrons on a trip into days gone by.

A strong field of 21 Crate Sportsman reported to the speedway to vie for the $1000 weekly winners share. They rolled out behind the front row of Hilary Ward and TJ Frost. Ward would lead the first set of 6 green laps until the yellow flew for a car stopped on the back chute. Another quick yellow allowed Speedsville NY native Dustin Jordan to move up onto the front row. Jordan took the holeshot on the restart and stretched out a comfortable advantage as the most entertaining battles took place from second on back. The two, three and at times four wide contest was highlighted by Mike Austin and Shayne Spoonhower who started ninth and tenth respectively. Spoonhower came home third and Austin fourth. However all this side by side action allowed Dustin Jordan to gallop away in his Fire Tower Doubles sponsored ride snapping a two year winless streak.

Tom Donahue of Smithville Flats NY sat on the pole for the 20 lap Street Stock Main event with Norwich NY’s Jake Fowlston to his outside. Donahue would careen to the high side in the first turn dropping four spots and leaving Fowlston to lead the first three circuits. Fowlston was hotly pursued by Rich Green and Shane Wolf Jr. with Green surging past on the high side as they came down to complete lap four with Wolf following suit into second. Green’s lead was short lived however as only a few laps later he was forced to retire with an unspecified mechanical failure. At virtually the same moment a yellow came out for a spun car. This handed the top spot to Shane Wolf who hails from Susquehanna PA. Wolf would hold the lead from lap seven to the checkers. An honorable mention must also be given to Newark Valley’s Earl Zimmer who made the hard charge from a sixteenth starting position up twelve spots to come home fourth.

Fort Hunter NY’s Frank Blanchard piloted his ‘72 Gremlin body, “83 Troyer frame, #4 Lou Lazzaro replica into Little’s Lawn Equipment Victory Lane for the Modified portion of the Classics On Dirt Feature. He was joined on the black and white squares by Smithville NY’s Brian Moore and his ‘73 Gremlin bodied #28 tribute to retired driver Pete Hulbert who was in attendance and spoke briefly in the victory lane interview.

21 ground pounding Modifieds made the call to the racing surface for the 35 lap headline event of the evening. Kevin Jordan out of Speedsville NY and two time track champ Brent Wilcox occupied the two front row spots as the field took the green. The first five laps would belong to Jordan who has begun to find his stride in his first modified campaign. Brandon Walters then took a tremendous run off the high side of turn two powering his way by Jordan on lap 6. Walters, who turned up with his big block ride after hurting the motor in his primary Saturday car on the previous evening, then set a blistering pace. Walters seemed uncatchable until tangling with a lap car a few laps later. The contact sent Walters around, backing into the barrier in turn three and ending his night. Kevin Jordan would re-inherit the lead and find the previous weeks winner, Jeremy Smith to his outside for the restart. Smith would spend the next 5 laps stalking the Conway Construction sponsored #22 of Jordan until Kevin slipped up the speedway entering turn three. Smith pounced on the miscue and motored into the number one position. Smith’s teammate Billy Decker also managed to get a wheel to the inside of Jordan and worked his way into second over the next two circuits. The Franklin Flyer would close the lead gap significantly in the late stages but ran out of time as Smith held on to claim back to back victories on the Mountain. Alan Barker also made an impressive run up to third after starting thirteenth.

The IMCA Modifieds started with weekly regular Bill Nichols, and Brandon Smith who was making his first 2018 Thunder Mountain start on the front row. Smith led for much of the first half of the 20 lap affair. A brief caution period on lap 8 bunched the pack and put Nineveh NY driver Gary Roberts on the outside of the front row for a restart. Roberts would keep it on the topshelf following the green, building up the momentum necessary to take the lead while coming off the fourth turn. The man known as Fireball would then extend to a 2 second margin of victory and his second trip to the newly named Little’s Lawn Equipment Victory Lane.

Nick Mady started outside the front row and led the entire distance in the Open Sportsman feature that was slowed only once when the red flew for newcomer Chris Hunsinger out of Scranton PA. Hunsinger had hopped the cushion in turn one, climbing the wall up and into the catch fence until finally coming to a rest on the cars left side. Chris climbed form his machine uninjured. Milford PA’s Nick Mady then cruised to his first win of the season in his Arley Farms sponsored #77X.

The rookie sportsman division saw Binghamton NY resident Joe McCabe return to claim his third set of Thunder Mountain checkers. McCabe who rolled off fourth moved quickly to the front and led the way for the rest of the yellow free Rookie Sportsman feature.

Justin Ladue secured back to back feature wins in the 4-Cylinder ranks. LaDue once again outclassed the field taking the win by a margin of over half a lap.

Jaime Frantz and Jared Green paced the field of 18 600cc Mods to the green. After a minor tussle on the first trip into turn one shuffled the deck slightly for an original restart, Frantz lept to the point. He remained in front for the duration of the 20 lap main enroute to his first win of the season.

Next Saturday June 23rd has a regular eight division show and in two weeks The annual Red White & Blue Special will light up the sky with a spectacular fireworks display and a Modified feature that will pay $1776 to the winner on June 30th.