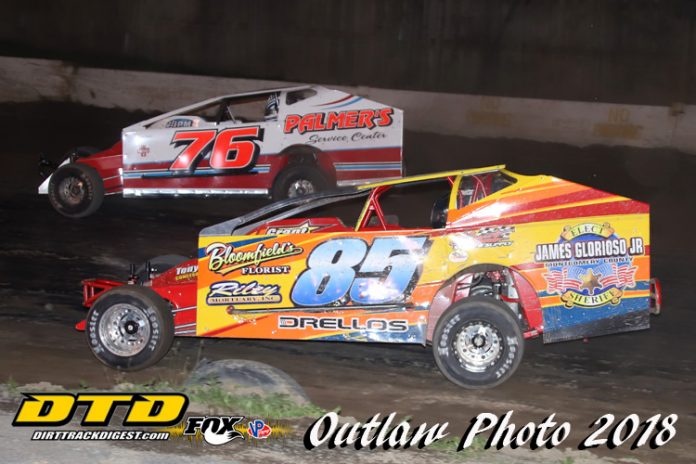 FONDA, NY – “To have to learn a new race car and a new racetrack at the same time is the most difficult thing I’ve ever had to do”. Those were the words of Demetrious Drellos after he won the 30-lap modified feature event at the “Track of Champions” Fonda Speedway on Saturday evening in the Elect James Glorioso Jr. for Montgomery County Sheriff/Bloomfields Florist #85 car owned by Bill & Erik Nelson.

With the win, Drellos became the 130th different driver to win a modified feature event at Fonda in a total of 1340 feature events!

The racing program on Father’s Day weekend also featured something called “Father’s Day Starters” where the fathers of all of the competitors at the track were invited on victory lane to give the command “Gentleman Start Your Engines” as the modified feature field was lined up on the front stretch before the start of the event.

Darwin Greene raced from his pole position start to the lead at the drop of Joe Kriss’ green flag to start the 30-lap modified main event followed by his teammate Kenny Sparks. Sparks lost the second position to sixth place starter Craig Hanson on lap two with Jimmy Davis also getting by Sparks for the third position after starting fourth.

Demetrious Drellos started the feature event in the seventh position and on lap six was the new fourth place car after getting by Sparks while Davis took the second spot away from Hanson on lap 11. The car on the move at this point in the event was 12th place starter Tim Fuller who was a top five car at the halfway point following Greene, Davis, Hanson, and Drellos.

Davis pressured Greene for the lead just after the halfway point in the event while Fuller continued to advance positions towards the front of the field, first getting by Drellos for the third spot and then Davis for the second spot on lap 21. It didn’t take long for Fuller to get by Greene for the lead as on lap 23 Fuller was the new race leader but that was only a one lap deal when Fuller blew the motor and drove to the pit area handing the lead back to Greene.

“This is unbelievable,” Drellos told Dan Haslun in victory lane. “This is the Track of Champions and you have to beat the best in order to get here to victory lane. There are many great competitors here and this means so much to me. This is huge for me, for my family, and for the Nelson’s. It will definitely go down in the record books for me.”

The caution plagued sportsman feature began with outside pole position starter Ricky Quick the early leader before Jeff Holt took over the point when lap one was completed. Two consecutive caution flags were out on laps four and five and it was on a lap five restart that Kurtis Hohensheldt took over the race lead.

Another yellow on the restart saw the downfall for Hohensheldt as after two tries at restarting on the pole he was penalized two positions to the second row for jumping the restart twice placing Holt and sixth place starter Chad Edwards on the front row for the next restart with Edwards taking the lead at that point.

Edwards continued to pull away from the field with the race now on for the second position with drivers that started at the rear of the field starting to make their way to the front. 2011 track champion Mark Mortensen was one of those drivers who saw himself in the fifth position on lap 10 after starting way back in the 18th spot.

At the halfway point in the event Edwards was the race leader with Holt, Josh DeMagistris, Quick, and Mortensen completing the top five. Mortensen’s next victim was Quick who he got by just after the halfway point in the event using the extreme outside groove to continue his march to the front. With two laps to go, Mortensen got by Holt for the second position with Edwards now a straightaway ahead.

Despite being the fastest car on the track over the final five laps according to timing and scoring, Mortensen ran out of time and couldn’t quite get to the leader as Edwards took his first win of the season and the fourth of his career in the division in the Tom & Sharon Spencer owned #37. Mortensen, Holt, DeMagistris, and Quick completed the top five at the drop of the checkered flag.

“This feels good,” Edwards said in victory lane. “We’ve had a stretch of bad luck to start the year and were really struggling with the new car. We brought out the old car tonight and started right where we left off last year so I think we’ll keep bringing this car out from now on. I want to thank my crew as we have put in a lot of work trying to figure this out. I also want to thank my car owners Tom & Sharon (Spencer) for spending the money so we can have fun.”

Jim Normoyle was the early race leader in the pro stock feature from his third starting position with Josh Coonradt in tow. That’s the way these two drivers would spend most of the event as they along with Kenny Gates, Ivan Joslin, and Chuck Dumblewski fought tooth and nail to get the victory.

At the halfway point in the event Normoyle continued to lead with Coonradt, Gates, Dumblewski, and Joslin completing the top five. Coonradt was trying every trick in the book to get by Normoyle for the lead as Dumblewski tried to get to the front to be one of the challengers for the victory.

When the leading car of Normoyle was blocked by a lap car going into turn one with five laps to go, Coonradt moved in for the kill as he pressured Normoyle heavily at that point. With two laps to go Coonradt got a run coming out of turn two on the outside of Normoyle and after a side by side battle to the finish line to complete the lap Coonradt was the new race leader.

Coonradt went on to his first career win in the pro stock division at Fonda after being in the class for two years over Normoyle, Dumblewski, Gates, and seventh place starter Cassidy Wilson.

Coonradt was also successful in the street stock division at Fonda with a total of 17 career wins and the 2016 track championship in the division.

“This feels awesome,” Coonradt said in victory lane. “I didn’t know if we could get by Jim (Normoyle) as he runs hard every week but we were able to get it done.”

Jason Samrov took the lead on lap eight of the 12-lap street stock feature and went on to his second win of the season and the fifth of his career in the division over defending track champion Johnny Young, Rob VanAernam, Steven Young, Michael Arnold, Scott Gauthier, Cliff Haslun, Bill Yager, and Kenny Hollenback.

Next Saturday, June 23 at the “Track of Champions” Fonda Speedway it will be Doc Blanchard Tribute Night with a regular racing program in all regular divisions starting at 7:00 p.m. along with a Kids Bicycle Giveaway.