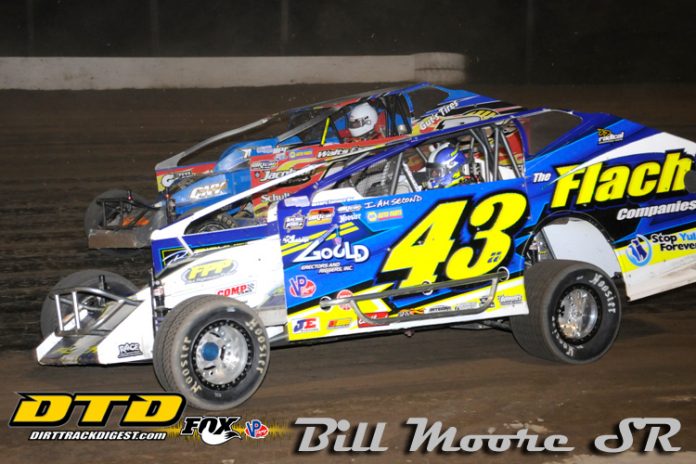 Tucked away from nearly everyone, you had to put in a little effort to find him, but there he was, Keith Flach. Diligently getting ready for the 2nd Super DIRTcar Series race of the season here at The D Shaped Dirt Demon, Brewerton Speedway.

After hot laps were over, Keith took his helmet off and talked about how the car felt. He was informed that he’s having some trouble getting out of turn 2. A casual conversation with his Crew Chief Andrew Phillips. No barking out commands or telling him he’s terrible. No, there’s nothing but a positive reinforcement amongst Andrew and Keith.

While Keith went out for his time trial efforts and came back in and after he was told that he’s still struggling. “Your off by about three tenths,” said Andrew Phillips, his crew chief. Flach sat in his car for a moment and took a moment to review what could he have done better to time trial better.

To see Keith in action is one thing, but to get to know Keith is another. Keith, the 32-year-old racer from Greenville, N.Y., is in his second full year on the Super DIRTcar Series tour. Add in to the mix a weekly stop at Albany-Saratoga and Lebanon Valley, and anyone can see that’s a lot of racing. However, Keith isn’t just a professional racer. During the day he’s employed at the family owned Gould Erectors in Selkirk, N.Y., where he is the Safety Director. There he punches the clock right along with the men who also punch a clock for a living.

While racing and working keeps most drivers busy, also filling his plate is Athena Grace Flach. His nearly 8-month-old daughter who has brought an incredible amount of joy and a lot of work to his plate.

“I knew becoming a dad would be a busy job but its been a little more than I thought it would be but its all worth it,” said Flach. “Kids don’t come with instruction manuals”

A near daily barrage of photos of his baby in cute poses are posted by his wife Chelsea. Recently, the Flach’s had baby Athena’s photos taken by the same portrait studio that did there wedding photos. Needless to say the comments are overflowing with happiness for the young couple.

Flach is an even keeled racer who keeps everything in perspective. A deeply religious man and animal rights activist, Flach took some time to reflect on his late brother JC.

Recently Lebanon Valley hosted the sixth annual JC Flach Memorial event where family and friends gathered to remember his brother who was tragically killed in September of 2012 when a tree fell on him at his parent’s property when he was removing it. He was only 24 days short of his 30th birthday at the time of his passing. The race was held on the 6th anniversary of his only win at Lebanon Valley. Keith finished 2nd in the event.

“My team gives me everything that I need to be successful each time I go out. Andrew and Jay (Castimore) have years of knowledge and help give me the tools to be successful each week. At times when we have a night where we finish 15th its like a win because it’s a struggle but this team works together. Everyone gets along well. There aren’t any personality conflicts or people throwing tools around. It’s a cohesive team”.

Earlier this year Flach had two motors expire. One at Lebanon Valley and one at Malta.

“The big blocks we run are the same for Malta and the Valley. We have no shortage of power for the Valley. We had a motor that had laps on it from Charlotte, Brockville and Oswego and for some reason it went south. The motor from Malta had a valve issue but it wasn’t anything that the motor builder did wrong it was a slew of teams that had a valve issue. It was a bad batch of valves, but other than that we have a strong engine program. I’ve never gotten out of the car at Lebanon and said we need more power or we have too much power let’s take some away” said Flach.

Recently Albany Saratoga had a kid’s bike giveaway and there was Keith posing with the winner of one of the bikes. Even though the kid had a Kenny Tremont shirt on, his Facebook page said, “don’t go too fast”.

As of June 8th, Flach sits 12th in points at Albany-Saratoga and as of June 9th he’s 5th.

These were the most up to date points available at press time.