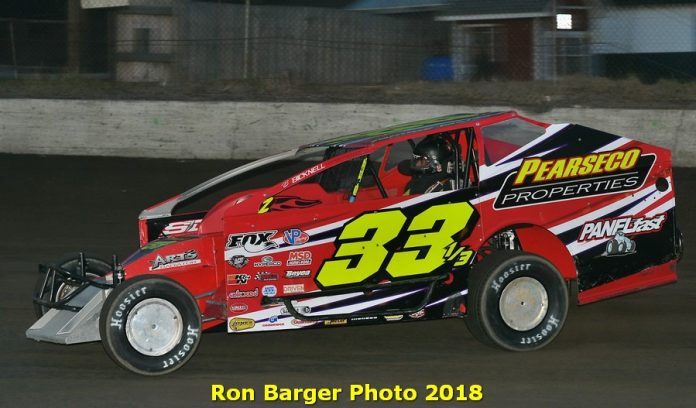 MIDDLETOWN, NY – A night that produced some of the most thrilling racing of the season was tarnished by a terrible brawl in the pits following last Saturday evening’s Sportsman feature at the Orange County Fair Speedway.

The racing teams of reigning Sportsman track champion Jesse Leiby and Troy Arnold were involved in a lengthy free-for-all in the pits that forced both the New York State Police and Town of Wallkill Police Department to be summoned to the scene.

Both Leiby and Arnold were disqualified for the night for Sportsman competition and were awarded no points for the altercation. Track management has also suspended both drivers for two weeks.

On a brighter note, all four features produced some exciting racing during the evening and no outcome was settled until OCFS starter Jerry Enright waved his checkered flags.

Tommy Meier picked up his first victory of the season in the Modified 30-lap feature after stalking Richie Eurich for most of the event. Meier was able to slip past Eurich while racing between the third and fourth turns on the 29th circuit around the five-eighths mile, hard clay oval.

Meier, who started eighth in the 26-car field, then went on to grab his 22nd career victory at OCFS – deadlocking Danny Johnson for 16th place on the all-time leader board.

“That was quite a battle,’’ said Meier. “Richie ran a real good race and he really made me work for this one. I was able to pull up on him several times, but just wasn’t able to get a good run to take the lead.

“I noticed he was having a little trouble through the turns, but he wasn’t drifting up towards the wall like I thought might happen. There just wasn’t a lot of room to get around him. But he spun his tires coming off the second turn and that gave me the opening I needed. I was finally able to sneak underneath him and then grabbed the lead.’’

Eurich, who was seeking his 51st career victory, started on the pole and began running away from the rest of the field during the race’s early stages. Meier, meanwhile, was racing in third behind Eurich and Craig Mitchell by the fourth lap.

Meier powered ahead of Mitchell following an eighth-lap restart and then began his chase on Eurich. The two drivers raced side-by-side between the third and fourth turns on the 15th lap with Eurich scored a nose ahead at the halfway mark.

Eurich was able to maintain his narrow lead for several laps before the two drivers crossed the finish line in a virtual draw to complete 25 laps. Meier then tested Eurich with passing attempts to both the inside and outside before finally gaining his inside edge on the 29th lap.

Perrego, meanwhile, added sparks to the pit area following his apparent victory in the Small Block Modified 25-lap feature. Perrego was disqualified for being light over the scales during the post-race weigh-in and surrendered the win to Shane Jablonka.

Jablonka, who picked up his first win here in five years, surrendered first place to Perrego, who passed him while racing off the second turn on the final lap. Jablonka, however, earned a reprieve and his second OCFS career win after Perrego’s disqualification.

Jablonka, after starting fifth in the 23-car field, chased Roger Henion Jr. from the drop of the green before Joey Bruning slowed action with a right rear flat with 13 laps completed. Henion maintained his advantage until Jablonka’s cross-over pass off the second turn bolted him into first place.

Jared LaBagh picked up his first victory of the season in the Sportsman 20-lap feature as he finished ahead of Joe Bonetti, Tommy Vigh Jr., Matt Shultz and Patrick Murphy.

LaBagh, after starting 11th in the 24-car field, moved ahead of Vigh for second place on the 14th lap and then set his sights on Leiby, who was seeking his fourth victory of the 2018 campaign.

LaBagh powered ahead of Leiby with an outside pass following a 17th-lap restart and Leiby spun in the second turn attempting to keep his advantage.

“We made minimal contact,’’ said LaBagh. “But that was after I was past him. I knew this was going to be my best shot for the lead and I went for it.’’

Leiby was forced to the rear after the incident and came all the way back to finish seventh. That performance was erased, however, because of his melee in the pits with the Arnold racing team.

Jim Hajkowski picked up his first win this season in the Street Stock 15-lap main event. But it didn’t come without some serious challenges provided by Wayne Taylor.

Hajkowski, who never trailed during the race, had Taylor glued to his bumper the entire race as he managed to take the checkered flag just 0.900 seconds ahead. Emerson Cargain Sr. followed in third place with Jim Maher and Joe Scheffold following.