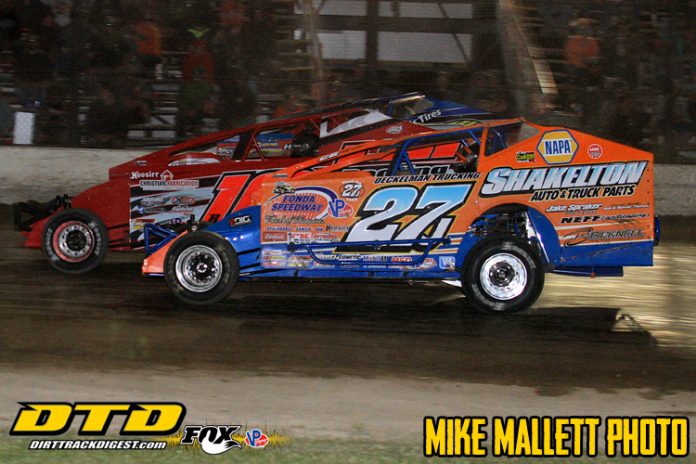 BREWERTON, NY – The weather was picture perfect for the McDonalds sponsored 100-lap Super DIRTcar Series Showdown at Sundown. An overflowing crowd of nearly standing room only flooded the D Shaped Dirt Demon for a Friday night Series race. With an on-premise concert going on, and a full house of cars and fans, it was a festive atmosphere at the very least.

The white elephant that glared out the most was the sandy undeveloped lot next to Brewerton Speedway. This was supposed to be the home of CNYRP. There isn’t anything new to report since Glenn Donnelly is still awaiting funding to complete the facility.

“The Doctor” Danny Johnson brought the Shackleton Napa Bicknell home to a well earned fourth place finish on the night.

“It was a solid night” said Danny. “We brought the car home in one piece and finished in the top 5.”

Danny also spoke about his new ride for Outlaw Speedway.

“Its too early to make any comments about the car. I need some more seat time in it to get acclimated to it”.

Speaking of the “Dr”, look for his car to make a “house call” next Saturday June 23 at the NAPA Auto Parts store at 68 Dolson Avenue.

“I’m going to have his car on display but I told Dan he didn’t need to come all the way down just for the grand reopening of the store,“ said George Shackleton. “We will also be doing something for the Super DIRTcar Series race in July as that’s right in my back yard” Shackleton added.

Shane Andrews, the voice of the Super DIRTcar Series always one to get the crowd involved, had a moment with Danny Johnson as he drew his starting position for the 100-lap affair. He posed for a photo with “The Hamburgler” the McDonalds mascot. Who says race car drivers don’t know how to have fun?

This might be my favorite selfie so far. The Hamburglar and The Dr Danny Johnson @brewertonspdway during the @SuperDIRTcar redraw. pic.twitter.com/WTAZoZRotx

Qualifying better at a place like Brewerton will make an enormous amount of difference. Erick Rudolph used the 100-lap affair to come from 16th to 5th at the end. However, Rudolph felt he left a lot on the table.

“I think without a doubt we had a top three car here tonight. We just needed to qualify better.”

Peter Britten was aboard the Graham racing 21A Troyer. He’s been sidelined with a back injury and has been hampered both racing and in the normal everyday things that you do.

“The doctors say I am too young to have back surgery, so they want to use conservative measures to treat, but I don’t think its working. When I am in the car I don’t have any pain but its working on the car and stuff around the house that causes me the most pain. I am thankful that my car owners are working with me during this time. They have cars and they probably would like to get something in return for their investment instead of looking at them.”

Larry Wight dropped out of the feature early due to a power steering pump failure. According to his crew chief Scott Jeffery, “the thing is locked up tight. Will not move at all.”…

Head flagger Dave Farney got hit by a large rock in the elbow during the 100-lap affair. He radioed for help and the DIRTcar staff brought the paramedics in and sent a replacement flagger to the starter stand. No cautions were thrown as the racing action continued during the drama in the flag stand. Farney later returned to the stand to flag the Sportsman race…

The track’s generator quit during the last feature of the night and half of the track didn’t have lights. The remaining 18 laps of that feature will be run next week…

Matt Sheppard had a good week. He picked up the $6k bounty at Brewerton and the $6,112 bounty at Albany Saratoga earlier in the week. During that race, the car started to smoke at the end. According to Dan Camara, a crew member for Sheppard’s 9S Bicknell entry, “there was an oil line that had come loose, and he was loosing air in a tire and a suspension component was failing all at the same time. He got all he needed out of the tire for sure. We believe there was no damage done to the motor with the oil loss.”…

With one car, one motor and some spares, Gary Tomkins finished a disappointing 15th on the night.

“If we didn’t finish in the top 10 I really don’t care” said a dejected Tomkins. “I could solve this problem tomorrow with cubic dollars.”

Its hard to imagine that the 2004 overall Mr.DIRT titlist struggles to find a high profile ride.

“Racing isn’t fair at all” said Tomkins. Tomkins will race at Brewerton and Weedsport when they run. Tomkins started 14th and finished 15th, 1-lap down…

The next Super DIRTcar Series race will be at Albany Saratoga Speedway for The Big Show 10 with special guest Kenny Wallace on June 26th.