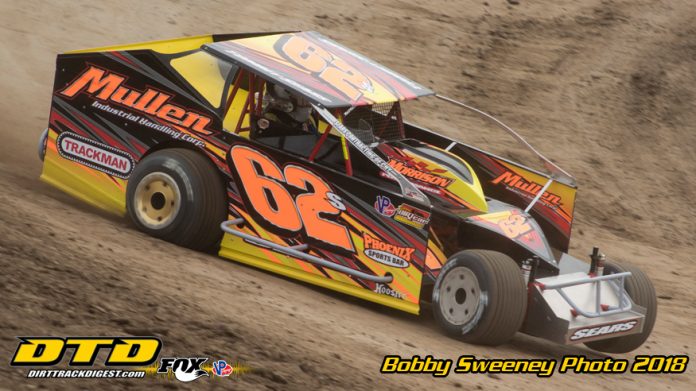 FULTON, NY – Last week, Tim Sears Jr. slid under Todd Root with two laps to go for the 358-Modified win. This week, uncle Tom Sears Jr. did the same, driving under Jeff McGinnis with two laps left to score his first checkered flag of the year.

“It was pretty intense late in the race,” Sears said. “I got passed for second there for a while and had to start moving around. My only chance was to take another shot at the bottom and it worked out. Luckily, it stuck a couple times where it wasn’t earlier, so we must have done something right.”

McGinnis jumped out front in the opening stages of the 35-lap small-block Modified main, leading over division rookie Glenn Forward. McGinnis opted to run the bottom early on, leaving the top for Forward to have free reign of. Forward rolled around the high side and darted to the lead on lap four, putting McGinnis back to second. McGinnis then joined Forward on the cushion, promptly retaking the lead with nine laps completed when Forward bobbled on the cushion.

Larry Wight was a man on a mission in the early stages of the race, charging from 12th to third in the first nine laps. At Brewerton’s Super DIRTcar Series race the night before, Wight was taken out of contention with motor issues less than 20 laps into the race. A different night, different motor, but same issues, as Wight went up in a cloud of smoke on lap 10, ending a strong run that could have turned into a win. This handed third back to Sears Jr., who was just passed by Wight a lap prior.

Forward then fell into the clutches of Sears, with Sears grabbing second on lap 14. However, Sears was now a straightaway behind McGinnis, and Forward wasn’t going away easy. The battle for second went back and forth, with Sears down low and Forward up high. Eventually, Forward once more cleared for the spot by lap 20 and Sears temporarily slotted in behind.

After a brief stint of running the top, Sears Jr. went back to the bottom and started gaining on Forward. On lap 28, Sears moved back into second, and by this point McGinnis’ lead had been chopped in half. Sears had help erasing the rest, as Forward blew a right rear tire the next time by, drawing the only caution of the race. With six laps left, McGinnis was faced with the tall task of holding off a former track champion in Sears Jr.

McGinnis got a good restart, sticking to the high line he had run since the early stages of the race. However, Sears was hot on his heels, hanging within a car length on the bottom. Sears inched up ever so slightly every passing lap, getting a good bite out of turn four to lead lap 33 by inches.

Sears Jr. continued his low line magic, pulling away from Jeff McGinnis over the final two laps to score his first 358-Modified win of the year. McGinnis held onto second, while Pat Ward, Mike Bowman, and Jordan McCreadie completed the top five.

Mike Button led early in the first Sportsman feature, but surrendered the lead to Amy Holland just after halfway. Once Holland was in front, it was a calm Saturday night drive, as the young driver cruised to her first ever Sportsman win.

Nick Krause had a win slip through his hands with a couple laps to go at Brewerton the night prior, as a controversial call sent him tail while battling for the lead. Tonight was a different story, as Krause was way too far ahead for the majority of the feature to even interact with second. When it was all said and done, it was Krause winning by nearly five seconds in the second Sportsman feature.

Dale Caswell started at the back of the Late Model feature, but charged through the field quickly. Caswell reached the lead just after the midpoint of the 20-lap affair and never looked back to score the win over Kevan Cook.

Justin Williams continued his literally perfect season, winning the first appearance of the Mod Lites at Fulton this year. This time, he had to dig hard for the victory, as Mike Mullen was glued to his rear bumper for much of the event.

For the second week in a row, Jake Davis dominated the Novice Sportsman feature for another win.