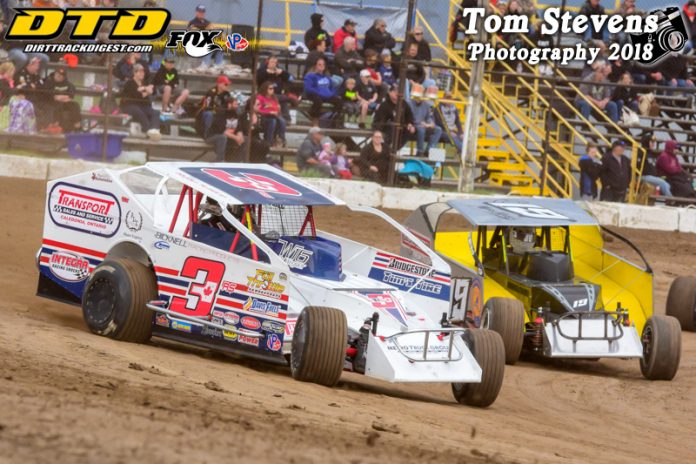 “I can\t believe it … this is crazy,” said first time Feature Winner RJ Pietz in Victory Lane, “that was quite a battle … but I finally got one.”

The hard fought battle was with his Josh Sliter Racing team-mate Brent Begolo who began a last lap challenge the final time down the backstretch, The two would exit Turn 4 with the checkered flag in sight side by side and would touch. Neither would back down until the finish line where Pietz would come home ahead by a margin of just 14 thousandths of a second.

Randy Giroux was first to lead the 20 lap event and was followed by Jeff May and Pietz with the three breaking away from the field until a red flag on lap 2 after Ryleigh Sliter flipped her car in Turn 3.

Giroux set the pace on the restart until May took control the next lap. Brent Begolo quickly landed in the runner up spot and down the backstretch of lap 7 became the new leader.

By lap 10, Pietz began to close in on Begolo who was leading the field into lap traffic. Pietz would get the upper hand on lap 12 taking the lead.

Begolo would keep to within a couiple car lengths of Pietz until their final lap battle. At the finish, Pietz and Begolo were followed by Tyler Winger, Chris Perry and Chris Watson.

“I got out front early … I got lucky tonight,” said first time Hoosier Stock Feature Winner Brad Sheehan, “it couldn’t have worked out any better … winning on Gastons Auto Sales Night!”

Kyle Pelrine led the 2nd Insta-Panels Duel on the Dirt Home Track Event to the initial green flag until Sheehan took control the next time out of Turn 4.

Racing to halfway and lap 10, Dave Bailey would gain some ground on the leader after taking second from Pelrine. Sheehan and Bailey would be separated by a couple car lengths well ahead of Pelrine and Rob Murray who were battling for third.

With a couple laps to go, as quick as Bailey would catch Sheehan – Sheehan would drive away to an advantage he would maintain until the lap 20 Checkered Flag.

Sheehan and Bailey were followed by Murray, Pelrine and Dave Small.

“It was real racey tonight, said Ryan Susice after winning his first 35 lap 358 Modified Feature of the season, “we went back to the drawing board again this week … we pretty much changed everything so it’s great for my team to get the win.”

Tim Jones was first to lead with Todd Gordon pressuring right from the start with Jones keeping control of top spot. Quickly, Susice would take over the runner up spot. By lap 5 the two broke away from the field by some three seconds with Susice taking the lead on lap 12.

Contact between Mat Williamson and Pete Bicknell slowed the field for the first time on lap 27 with Bicknell slowing with a flat right rear tire.

Susice was back out front on the restart with Chad Brachmann in second spot with another incident slowed the pace on lap 29. It wasn’t Bicknell’s night after making contact with Mike Bowman.

Susice would hold the advantage over Brachmann on the restart and in the final laps would drive away to a comfortable lead over Brachmann. Gary Lindberg would make a late race charge to take third from Fred Carleton with Mat Williamson fifth.

“I didn’t want to leave the top and lose momentum,” said James Friesen in Sportsman Victory Lane for the second time of the season.

Twice late in the 25 lap Feature Friesen and the whole field wouid lose just that with cautions – the final one setting up a one lap dash to the checkered flag.

DiPietro and Carleton side by side now had DiPietro in control to lap 10; Through increasing lap traffic however, Friesen became the new leader on lap 12.

With Friesen able to pull away slighty the last half saw several position changes from drivers including DiPietro, Carleton and Rob Knapp

In the one lap dash, Friesen was followed by Rob Knapp, Luke Carleton, Jay Mallory and Adam Leslie.

“Dad can have the money … I just want the sticker,” said Anthony Kelly after earning his second 4 Cylinder Feature Win Sticker of his rookie season in the car his Dad Tony drove to the championship last season.

The younger Kelly took the lead from initial leader Austyn Werstroh after a lap 6 caution. The two former Tuesday Night Kart Racers both have had disaster strike each other in recent weeks with fires and blown engines.

By halfway Kelly opened up a couple car length advantage over Werstroh and in the closing laps, was able to stretch the margin.

Chris Mussat was first to lead the 12 lap Feature for the Dave’s Auto & Speed Centre V6 Feature until slowed by a lap 4 caution. With 16C in control on the restart with Adam Plazek pulling side by side with the leader on lap 7.

Plazek would take the lead with Chris Mussat now being challenged by John Couture.

With two laps to go, Plazek had opened up a comfortable lead when Couture took over the runner up spot.

Through to the finish, Plazek and Couture were followed by Kevin Conley, Mussat and Alana MacDonald.

UPCOMING at Merrittville Speedway
Avondale Food Stores will host a Bobcat of Hamilton Weekly Racing Series Special Event that features the Southern Ontario Sprints Gary Cunningham Memorial and the second Vansickle Pet Valu&Groomingdale’sEnduro Qualifier accelerated by Niagara College.
Joining the annual $1 Hot Dog Night will be the 358 Modifieds, Hoosier Stocks and the 4 Cylinders.
Pits will open at 5:00, Grandstands at 5:30 and Show time is 7 PM.
For further information – call 905-892-8266 or visit www.merrittvillespeedway.com
For all the news on Merrittville Speedway’s 2018 Season, Race fans and Race teams alike can follow Merrittville on Face Book https://www.facebook.com/groups/merrittvillespeedway/ and Twitter https://twitter.com/Merrittville?lang=en
MERRITTVILLE SPEEDWAY SPONSORS The 2018 67th Anniversary Bobcat of Hamilton Weekly Racing Series for Merrittville Speedway’s 5 Divisions is brought to race fans and racers by division sponsors – S&W Service Centre, David Chevrolet, Hoosier Tire Canada, Vansickle Pet Valu&Groomingdale’s, Central Fabricating and Welding and Dave’s Auto & Speed Centre in addition to many marketing partners Visit them at http://www.merrittvillespeedway.com/sponsors.htmand visit them when you require their products and/or services.