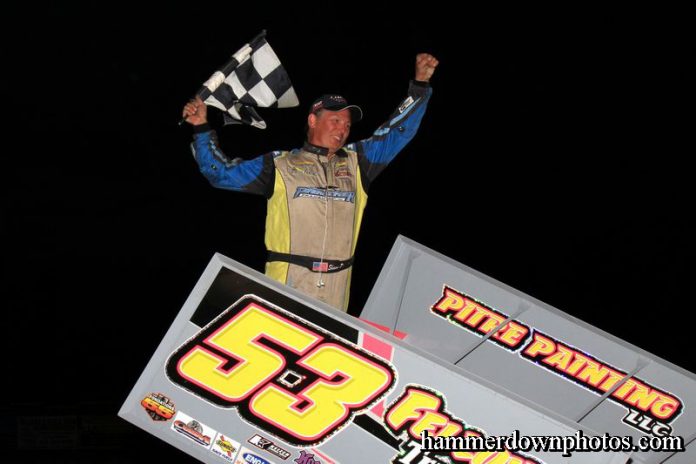 VERNON, NY – It’s been over four years since Shawn Donath last visited victory lane with the Lucas Oil Empire Super Sprints (ESS). The veteran pilot from South Onondaga, N.Y., has his fair share of just bad luck. That was until this past Sunday when the ESS made their first appearance of the 2018 racing season at the Utica-Rome Speedway.

Donath dominated the 25-lap A-Main to score his seventh career feature win with the club and his first since April of 2014. Donath drove to the lead early in the main-event on the outside of the speedway before holding off the challenges of Bryan Howland late to secure the E&V Energy, NAPA Auto Parts, Mach 1 Chassis feature victory.

“It’s huge for everybody that puts so much effort into this whole program,” stated Donath after the win. “We’ve been struggling for a few years. It’s been a huge building project with the chassis deal (Panther Frameworx) and motor deal (Donath MotorWorx). This is huge for my family, my team with everything we are involved in. Happy Father’s Day to my dad, he is a machine. If you guys knew the work he puts in, it’s unbelievable.”

Bobby Varin went off from the pole position with Billy VanInwegen on the outside. The duo battled side-by-side for the first circuit with Varin leading the way. Donath, who started fourth, made his move on the second lap going to the outside of turns one and two to get by Varin for the lead.

Donath set a lightning pace in his brand new chassis No. 53 encountering slower traffic by the eighth circuit. As he paced the field, Bryan Howland put the pressure on Varin for the runner-up position.

They race reached the mid-point with Donath on the point racing in very intense traffic. Howland was in pursuit after disposing of Varin. He was making the most of his cars maneuverability to move around the racing surface.

Seventh place started Matt Tanner entered the fray as he moved into third on lap 15 with one of the fastest cars on the race track. He was gaining on the top two as they negotiated slower cars at the back of the field.

The final five laps of the race saw Donath locked down on the bottom of the speedway with lapped cars racing all around him. This slowed his pace allowing Howland and Tanner to close. Howland got to within in a few car-lengths with two laps remaining.

“I had no idea where they were,” noted Donath of the competition. “I caught the 19 (Paul Kinney) and he was racing me pretty hard. I thought I saw somebody come alongside, I was hoping to not throw it away. The car was good in the black, on the bottom, it didn’t matter. It was on rails. It is the first night in this car and I couldn’t be happier.”

On the final lap of the race Donath stayed on the inside groove while Howland elected to go the top. The pair were close down the backstretch was Howland throwing the Hail Mary in turns three and four. Howland went up the track with Donath turning hard off the bottom to hold him off for the $2,060 win.

Howland, of Union Springs, N.Y., had to settle for second after his late charge. He admitted afterwards he didn’t feel like his car was as good as it needed to be to beat Donath.

“It was hooked up pretty good,” stated Howland about his No. 51. “I think partially I caught up to him (Donath) was because of lapped traffic. I think if he would have cleared it he would have taken off again. His car was really good. Looking at it, it was exactly the way I wanted my car to drive.”

Tanner made the late charge only to come up short in the third position. It was a much needed podium run for the Stephentown, N.Y., driver.

“The track was right in our wheel house tonight,” commented Tanner. “It’s definitely been a struggle the first part of the year here. We’ve been going better the last couple of weeks. If we had a little luck I think we would have had something for these guys. Definitely a good run and something to build on.”

Danny Varin made a late move to get by his father Bobby for the fourth spot forcing Bobby to be happy with fifth.

ESS NOTES – A total of 36 sprints filled the pits on the make up date from the Memorial Day Weekend rain out….The win by Donath makes it eight different winners in nine events for far in 2018…The Lucas Oil ESS Gang will now take two weekends off before it’s the Sixth Annual Donath MotorWorx CNY Speedweek that start on the 4th of July at Can-Am followed by Land of Legends, Brewerton, Fulton and capping off at Utica-Rome.