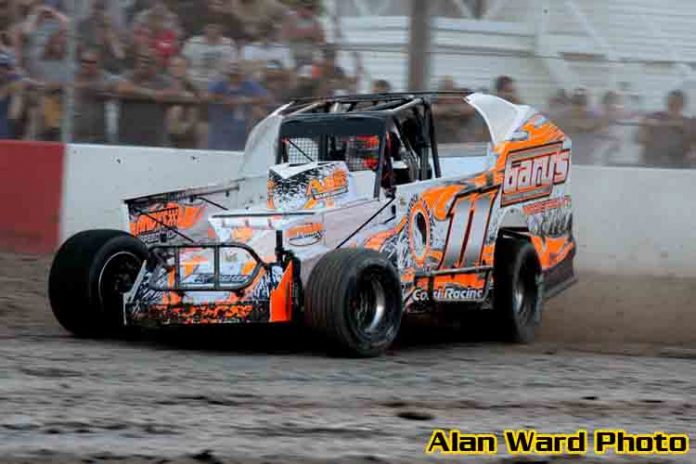 With the roofs removed from the Sportsman Modified cars in the annual special “topless” event, White River Junction, Vt., driver Sunn ran an exciting race from 16th place at the start. Among his many impressive maneuvers in traffic was an unbelievable pass while racing five-wide in Turn 2. It took Sunn just 13 laps to get to the lead, passing by Vince Quenneville Jr. to take command.

Veteran driver Jimmy Ryan put together a multi-lane blast through traffic from 10th starting position for the runner-up spot. Quenneville turned a miserable month around by leading a dozen circuits of the 30-lap race and finishing third. Brian Whittemore had an outstanding run to finish fourth, and David Schilling came from 18th to grab his second-straight top five run.

Joey Roberts of Fletcher, Vt., scored an emotional win in the 25-lap O’Reilly Auto Parts Limited Sportsman feature, dominating the field for his first victory on dirt. Roberts, whose last win was in the “topless” event on the former Devil’s Bowl asphalt track in 2016, led the final 15 laps of the race and won by nearly half of a lap.

Chris Murray of Fair Haven, Vt., was once again a convincing winner in the Super Stock division, topping the field for his third win of the young season. Josh Bussino was a solid second for his best run of the year, and Billy Duprey, Curtis Condon, and Kevin Elliott completed the top five in the 20-lapper.

Austin Chaves of Chester, Vt., gave his dad, Andy, a nice Father’s Day gift with his first win of the year in the Friend Construction 500cc Mini Sprint division. Sixteen year-old Chaves – the defending champion – had nothing but bad luck prior to Sunday’s race, but rebounded with a large margin of victory in the wingless race. Brandon Emerson took second ahead of Cody O’Brien, Erick Mulready, and Samantha Mulready.

Devil’s Bowl Speedway’s next event is “Throwback Night” on Sunday, June 24, when the restored old-time racecars come in from the Mohawk Valley Vintage Dirt Modified Series and the new Champlain Valley Vintage Modified Series. Sportsman Modifieds, Limited Sportsmen, Super Stocks, and Mini Stocks will race as well as the Bandit Youth Mini Stock division. General admission is $12 for adults, $10 for seniors, $5 for teens (13-17), and free for kids age 12 and under. Racing starts at 6:00 p.m.