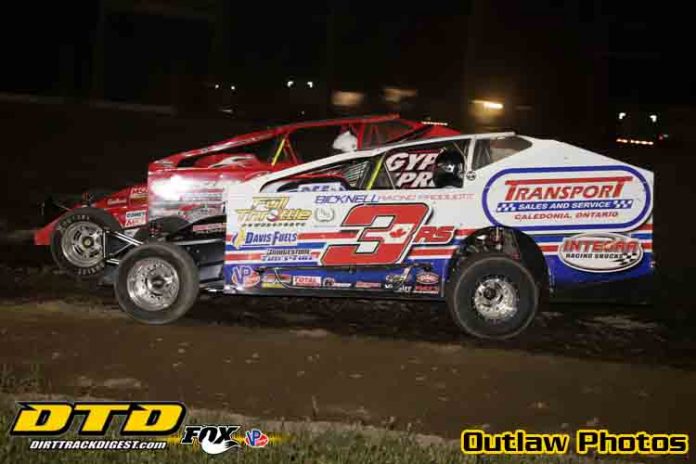 VERNON, NY – After what felt like ages, Utica-Rome finally found a dry day to play. A field of 21 358-Modifieds raced, but none raced faster than Pat Ward, not even a hard charging Billy Dunn.

“I first saw him when he was inside my door,” Ward said of the battle. “It’s been a good weekend, a tough one but a sixth, a third and a win is real good. I can’t thank the Wight’s enough for all they do for me.”

Steve Way took the lead at the drop of the green for the first 30-lap Small Block Modified event of the year, staying glued to the bottom of the track. Up high, Ward made quick work of the front of the field, starting fourth and taking the top spot from Way on lap three. Ward kept his momentum rolling, opening up a big gap over the rest of the field.

Way then fell into the clutches of Bobby Herrington, as the duo went to battle for second. Dunn started in 12th in the Slack No. 3RS, but reached the fight for second just 10 laps into the race. By lap 11, Dunn was past both Way and Herrington and into the runner up spot. However, he was a full straightaway behind Ward.

Lap after lap, Dunn slowly picked away at Ward’s lead. By lap 25, Dunn had chopped the deficit down to just a matter of feet, working over Ward’s rear bumper. With four laps left, Ward shoved the nose in turn one and opened the door on the preferred bottom groove for Dunn, and Dunn went for it. The pair hit doors exiting turn two, and Ward was able to hang on. Ward and Dunn made minor contact once more the next time by fighting for the same spot, and Ward continued to lead.

Dunn tried the top a couple of times in the final pair of laps but it wasn’t meant to be, as  Ward claimed his first Utica-Rome and second overall 358-Modified win of the year.  Dunn, started way back in 12th and chased down the leader in the caution free event, noted that he had his chances but couldn’t finish off the pass for the lead.

“I had to keep it under him, but I wasn’t going to wreck him or both of us for the win,” noted Dunn. “It was a hell of a race.”

Former track champion Matt Janczuk led the field to the green for the 30-lap DIRTcar Sportsman Series event, taking command over Kevin Root. Dave Marcuccilli was on the move early, charging from 12th to fifth in the opening two circuits, then climbing to third by lap seven. The trio of leaders ran nose to tail the first half of the race, with Janczuk and crew reaching lapped traffic on lap 14.

As the leaders sliced and diced through the pack, Root began applying heavy pressure on Janczuk. On lap 20, Janczuk got pinned down low behind a lapped car, and Root took full advantage, driving around the outside and to the lead. From there, Janczuk had to play defense on Marcuccilli and Kyle Inman, watching helplessly as Root stormed away. At the end, it was Kevin Root scoring his first DIRTcar Sportsman Series win over Matt Janczuk, Dave Marcuccilli, Kyle Inman, and Alan Fink.

The Empire Super Sprints joined the card on the evening with a 25-lap feature. Bobby Varin led the opening hundred or so of feet before Shawn Donath rocketed under Varin and our front. Donath took off, quickly establishing a half track lead.

At halfway, Bryan Howland skated around Varin for second and began his march on Donath. Initially, Howland wasn’t gaining any ground, but began picking up steam as the laps wound down. By lap 20, Howland was closing fast just as Donath was reaching a thicker line of traffic. Howland, who intended on retiring in 2017, closed the gap to within a car length on the last lap, but it wasn’t enough, as Shawn Donath claimed victory in the caution free event.

Howland chased in second, followed by Matt Tanner, Danny and then Bobby Varin.

Teddy Starr claimed the 15-lap Novice Sportsman feature, taking the lead with a handful of laps remaining and holding off Robert Gage to score his first ever win.