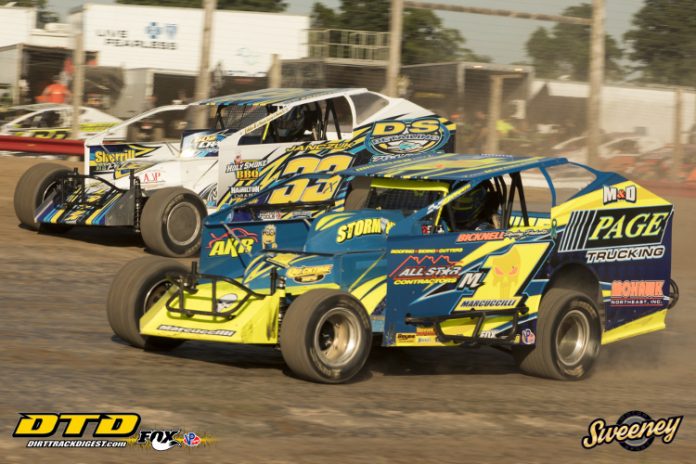 What a great all around weekend it was for me. Jon finally made his way home from Uganda and we picked him up Thursday. Friday after a relaxing morning at home I went to the Super DIRTcar Series “Showdown at Sundown” at Brewerton Speedway. It was amazing to see some of the greatest drivers in Modified racing competing at my Friday racing home.

“Super Matt” Sheppard managed to improve his chances of winning tye 100 lap main event by drawing the pole position at the redraw. You’ve all read the outcome, but it was a blast watching Billy Decker work the topside from sixth place to second place and pressure Matt. I noticed some ingenious driving by Decker, but nothing he did would give him the edge he was looking for and he had to settle for second place.

Saturday night I had to miss Fulton for a multi-church function near the church I pastor. It was great seeing so many people come together to help a couple that lost everything in a house fire. It was especially nice to see so many of my church family there in support of the event.

After a powerful service for Father’s Day and a great family lunch Jon and I headed to Utica Rome for the Lucas Oil Empire Super Sprint make up, which piggybacked onto a DIRTcar Sportman Series event.

Kevin Root won the 30-lap DIRTcar Sportsman Tour feature at Utica-Rome in a fast paced green to checkered event. He was an extremely happy man in victory lane. The series win was the biggest of his career and he couldn’t have expressed it any better. My favorite scene was Kevin’s son sliding over the roof of his car to give him a victory hug.

Shawn Donath dominated the caution free Lucas Oil Empire Super Sprint 25 lap A-Main. His new Panther Chassis/Donath Motorworx ride was on a rail. From the drop of the green to the checkered flags Shawn was able to put the car wherever he needed to when he need to thread his way through traffic. Shawn’s father Dave was there to share in the victory, as well as much Shawn’s family.

Pat Ward held off the late race challenges of Billy Dunn to win his first 358 Modified feature at the Action Track of the East. The 30-lap main-event for the Modifieds also went green to checkered. I didn’t have time to stay for the ProStock feature, but Travis Welch was able to cross the finish line first in the 20 lap event.

In all, I’d have to say the two racing events I was able to attend over the weekend were well worth the trips. It was great to finally see the sun shining over Utica-Rome Speedway and to have such an incredible trifecta of caution free features. You don’t get to see that too often.

Dave Marcucculli made the comment during his podium finish interview that he didn’t expect the Sportsman feature to go caution free. With his experience in that division I’m not surprised at all by his expectation of caution periods when 31 drivers start a race with multiple levels of talent racing with mutiple grades of equipment.

I’ve seen that same mindset everywhere I’ve been because, in the broader sense, people have been conditioned to expect less from other people or things. We can’t allow that mindset to affect our perception of what God wants to do for us, or what God wants to do through us.

Graham Cooke, Pastor and author, said this about Jesus Christ:

What he means is that God is an over the top kind of Father that wants the absolute best for His kids. He wants to lavish His children with blessings so outrageous, only He can take the credit and receive the glory for them possessing such extravagant gifts. God never dies things half baked. He’s all in when it comes to His children or His plans.

“Now to Him who is able to [carry out His purpose and] do superabundantly more than all that we dare ask or think [infinitely beyond our greatest prayers, hopes, or dreams], according to His power that is at work within us, to Him be the glory in the church and in Christ Jesus throughout all generations forever and ever. Amen.
EPHESIANS 3:20‭-‬21 AMP”

Notice one thing about this passage. It says that these over the top kind of blessings that overtake us will superabundantly exceed our greatest prayers, hopes, and dreams because of His power working in us. God’s power working through the believer produces the purposes of God in such beautiful and powerful ways that your mind can’t comprehend it.

If we could capture the reality of this truth it would cause us to see the world in an entirely different way, a good way, that just might become an infectious perspective of positivity. Imagine how that would reshape the landscape of our lives individually, and collectively.

If you’d like to know more about how God’s power is available to you, or have a need we can assist you with just let us know. We can be reached by email at flchaplain@windstream.net, or on Facebook at Finish Line Chaplain, or Kevin Westcott Ministries.