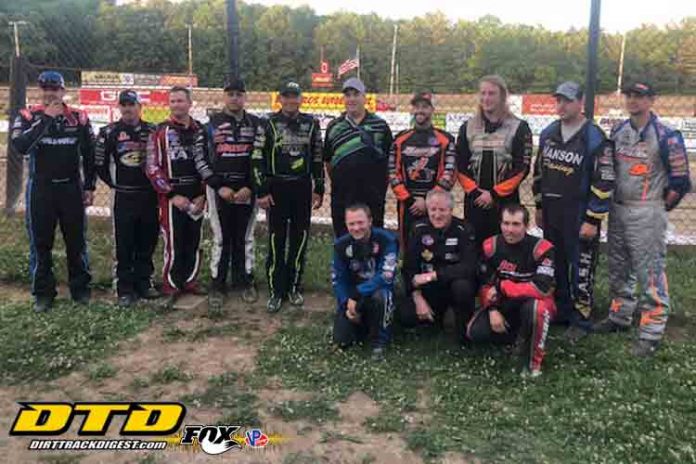 The race week in our area started off in a big way on Tuesday evening with “The Tribute” event honoring the careers of Clarence “CD” Coville and “Jumpin” Jack Johnson, two of the best drivers our area has ever seen. The people that helped put this together are people with their hearts and soul in racing and Tuesday’s results proved it. Everything about the evening was special and they appeared to have ordered one of the best weather days we have had this race season.

In the pits were over 40 of the racing community’s best all coming to be part of this historic racing first in our area. After qualifying was completed the top three were brought to the front stretch to draw for starting positions with each driver being paid for their starting positions which was part of the bonus given for the event. When all this was complete announcer Dan Martin began to tell the crowd about a fan in attendance that was battling health issues and after going through three hours of Chemo that day was determined to be at the “Great Race Place” for “The Tribute” to honor two of his favorite drivers. Craig Champion posed for a photo with the top 12 drivers making it “the top 12 and one Champion.” As we said last week, we’ve known Craig and his family for many years, they were part of the Compani era at Fonda and Ed graduated high school with Craig’s mother, Diane. This moving moment is just one of the things that makes our sport so special and we want to thank Lyle DeVore and his staff for taking the time to show everyone how caring our sport is. We also send our thoughts and prayers to Craig and the entire Champion family.

As the starting 31 car field came to the track it was announced that the pole was being left empty to honor Brian Goewey who recently passed away. Goewey was a major player in area racing as a sponsor, car owner, and driver himself. At different times in their careers Bryan sponsored Jack Johnson and Ronnie Johnson.

At the end of the 61-lap feature that awarded much money to the leaders of laps 6 and 12 and paid $6,112 to the winner Super Matt Sheppard it was only fitting that the one of a kind trophy was presented by Super CD Coville who was present in one of the VIP towers for the evening. The crowd for the night was a mix of CD and Jack tee shirts worn by faces that we have not seen at area tracks for some time. Job well done. On Friday at Albany-Saratoga we returned for more racing action. Prior to all the racing and festivities we have gotten accustomed to a prayer at the drivers meeting from Pastor Ed Harkins. Harkins also does a prayer before the National Anthem at the beginning of the evening. Ed was missing on Friday night and this brought former racer and chair concessionaire, Ron Dwyer to the tower to say the prayer for the fans before the National Anthem. We have known Ron for many years as a racer and more recently as the father of young racer, Olden Dwyer. Ron did very well as Pastor Ed’s stand in and we got to see just one more side of someone we have for many years. We hope all is well with Pastor Ed. We snapped this photo of four young fans, Kayden and Brian, both 11 and Blake four and Olivia three, who were enjoying themselves in the cut away car on the midway at Malta. The car, a DKM chassis, is sponsored by Albany Saratoga, Burt’s Tree Service, and HiCo Fabrication. We’ve also seen many adults enjoying the car on some occasions. With the pits so full each week, sometimes over 150 cars, it’s difficult to cover but this week we got to the back row and found an old friend, Jackie Brown, Jr. who has made Albany-Saratoga his home on Friday nights this season. Jackie is most often at the races with his Dad and with this being Father’s Day weekend that’s great see. Jackie admits the track is tough but he is steadily adjusting and improving. It was great to renew old friendships.

News this week from the New York State Stock Car Association (NYSSCA), June 9th a $50 bonus was awarded to Brett Hearn in celebration of NYSSCA’s 50th anniversary year. Hearn was the first member across the line in the J. C.Flach Memorial event at Lebanon Valley. On Tuesday, June 12th, three awards were given to the Pro Stocks, Kim Duell, Dan Older and Dean Charbonneau. The $50 bonus was given to Matt Sheppard on Tuesday for being the first member in the Modified feature. NYSSCA awards were given on Saturday night at Fonda. Modified, Demetrios Drellos and Jim Davis; Sportsman, Chad Edwards and Mark Mortensen; Limited Sportsman, Derrick McGrew, Jr. and Cory White; Pro Stocks, Josh Coonradt and Jim Normoyle; Street Stocks, Johnny Young and Rob VanAernam and Wild Card, Reuben Kennedy, Jr. (Pro Stocks) At Glen Ridge on Sunday, Cliff Haslun was involved in a first for the Schoharie driver. It turned out to be a drag race of sorts but not in a straight line on an oval because it was a two car shoot out between Haslun and Steve Cosselman. The results was Haslun picking up his first checker at the track in the Street Stock division. Cliff’s son Daniel announced the race and interviewed his father in victory lane, on Father’s Day.

Coming up this week on June 24th is a celebration of life for Bernie Heald at Albany Saratoga starting at 1 pm. On June 26th the Big Show 10 takes the track at Albany Saratoga, promoted by Brett Hearn. And also announced on Friday at Malta on July 10th there will be a night of features to complete the rained out portion of the June 1st show.