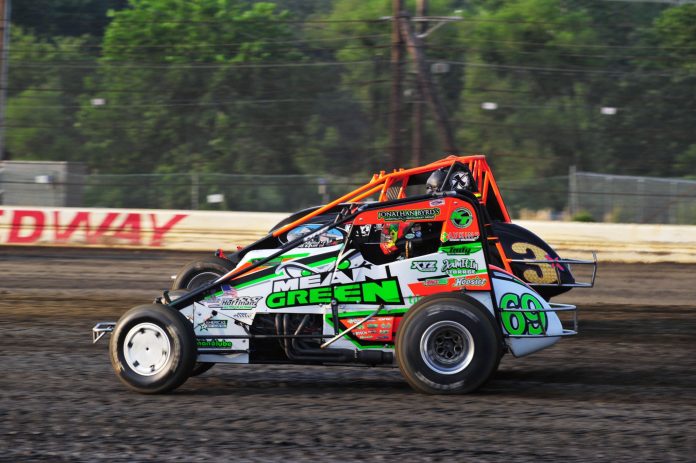 There’s a whole host of names who’ve been a part of the ride that’s taken the Hoffman Auto Racing/Dynamics, Inc. team to the brink of 100 USAC AMSOIL National Sprint Car points-paying victories.

Only one driver can say he was in the driver’s seat of the ride that pushed the venerable team over the century mark: Kevin Thomas, Jr., who drove to victory for the fourth time in USAC Sprint Car competition this season in round 5 of “Eastern Storm” on Monday night in the series’ debut at Bridgeport Speedway.

“It’s an honor to be the driver to get them that milestone,” Thomas exclaimed. “It’s something special and something you’ll remember until the day you die or tell your grandkids. I’m glad they’ve given me this opportunity to run for them this year. It’s very special to me and this team. There’s a lot of people who’d like to be on a team like this. I’m just glad the guys behind me are with me.”

The Cullman, Alabama native set the tone early, as he has done time and time again this season, by setting quick time in qualifying for the fourth-straight night and for a remarkable tenth time overall through the first 16 events of the 2018 season.

“It’s nice to start off the day with a smile on your face,” Thomas said with a grin. “There are times when you hot lap and qualify 10, 12th quick and you’re a miserable bastard at the end of the day and it screws your whole night. I’m very temperamental and I wear my feelings on my shoulder. Setting quick time helps me a lot mentally. It gives me a little bit of extra confidence that I can conquer whatever racetrack we’re at. Whether I do or don’t, it gives me the feeling that helps with momentum and even communicating with the crew and things like that. You just feel focused. We’ve been rolling off fast times and it’s actually been making my crew mad since we have to start sixth every night. It’s hard to pass these guys who are that fast unless they make a mistake.”

Those individuals he eluded to were, yet again, the ones he’d have to contend with on this night, namely Chris Windom and Tyler Courtney. Chad Boespflug led the opening lap before giving way to third-starting Windom who raced to the lead underneath Boespflug entering turn three on the second go-around.

Meanwhile, Courtney, who had been shuffled back to third on the opening lap after starting from the outside of the front row, had worked his way back into contention and was draped all over the orange No. 5 of Windom. Courtney initially ducked low off turn four on lap eight to challenge the reigning Eastern Storm champ, then a lap later, changed course by riding the lip around the outside of Windom exiting turn four to take the point.

The lead was short-lived as Windom slid Courtney back on the very next lap between turns three and four to reclaim the prime real estate out front.

With those two engaged in their own tug-of-war, Thomas was chiseling ever closer to the front, lying just a car length behind Courtney for second when the yellow flag fell for a spin by both Jarett Andretti and Robert Bell between turns three and four.

On the ensuing restart, Courtney took the dirt highway a lane higher than Windom, working, working intensely for the next two circuits on how to navigate his way to the brink. On the 14th lap, Courtney attempted a slider on his apparel trailer mate Windom entering turn three. Courtney’s right rear and Windom’s left front connected, bouncing Windom out of the lead and fighting to regain his marbles until slotting back into third behind Courtney and Thomas.

Courtney’s joyride as the leader only lasted another half lap, ending when Thomas outlasted Courtney down the middle of the back straight into turn three. A highly-motivated Windom was able to skirt past Courtney a lap later to return to the runner-up position.

Once again, the group at the front consisted of the trio who’s captured 11 of the 15 victories with the series this season, three drivers at the peak of their game battling for supremacy every night, which takes full concentration, effort and attention to every detail.

“I was driving my ass off,” Thomas admits. “They’re racing for the same things I’m racing for. They’re driving their asses off and I’m driving mine off too. When you get three drivers like that who’ve been running together all week, all year, it’s great competition. It’s fun that it’s gotten to the point where it’s this competitive each and every week no matter if we’re at Putnamville or in the middle of the east coast, I-80 or Knoxville.”

Though a sterling start, and a spot among the most consistent, has put him solidly into the series point lead, Thomas hadn’t yet won during Eastern Storm, something he changed by leading the final 16 laps at Bridgeport to win over Windom, Courtney, Bacon and Stockon.

Thomas admits he got a little too lax after a hot late May and early June run. It’s the competition that keeps Thomas motivated, something he’s relishing even if he doesn’t always come out on top.

“I’m really enjoying getting beat sometimes because it kind of wakes me up,” Thomas explained. “In ‘Indiana Midget Week,’ we won a bunch of sprint car races and I kind of got comfortable. I was getting my ass kicked out here and it’s made me sit up in the seat a little bit. They’re doing the same thing. We’re all just really fast right now, all the way down to qualifying. Some of us aren’t even good qualifiers, but we’re qualifying 1-2-3-4-5, all right together. I don’t like getting beat, but this is a competition sport. You get beat sometimes and, sometimes, you get beat a lot. That’s just the way it is.”

Bridgeport’s new 3/8-mile dirt oval is one of three first-time venues on the USAC Sprint Car trail this season. Yet, to Thomas, Bridgeport didn’t seem much like a stranger, more like a long-lost brother or cousin to a track near his home base in which he has had much recent success.

“This track is just a stretched-out Gas City,” Thomas observed. The dirt’s actually similar. It’s got that dark dirt. It’s got a lot of grip no matter where you go. It’s got a D-shaped backstretch and a wall on the front stretch. We didn’t necessarily run the same setup, but we had the same balance on the racecar and it worked. We could’ve went out there and sucked and it would’ve been a different story. The judgment call from Davey (Jones) and Brad (Alexander) on what to do with the racecar, they hit it right on the money.”

Windom leads the Eastern Storm standings by a single point over Thomas entering the final stop Tuesday at New York’s Weedsport Speedway. Ballou runs third, 38 points back, ahead of Courtney (-39) and Brady Bacon (-67).