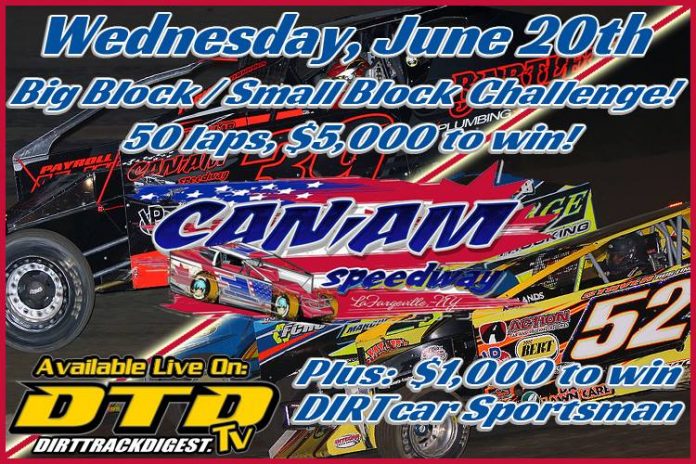 LARFARGEVILLE, NY – For one night only, on Wednesday, June 20, the big-block Modifieds return to the Can-Am Speedway to challenge the weekly 358-Modified regulars in a special 50-lap affair. They’ll be battling for a $5,000 top prize with the first small-block to cross the line picking up a $300 bonus.

The speedway held its first big event of the season last week as the initial stop of the Border Battle Series for the 358-Modifieds invaded. Billy Dunn was able to take the checkered flag for his first feature win of the season. The Watertown, N.Y., pilot leads the point standings at the speedway and he is just one of the many stars expected for the Wednesday night special.

With show up points on the line for the small-blocks, other expected challengers to the big-block invaders include top five in point drivers and feature winners Jordan McCreadie and Ryan Arbuthnot, multi-time winner Danny O’Brien and former big-block Modified driver Scott Webb. All of them will be hoping to defend home turf while making it a $5,300 win.

Also on the special Wednesday night card is the DIRTcar Sportsman who are set to compete in a 30-lap special with $1,000 going to the winner. Dave Rogers sits atop the Sportsman standings. He’s been the model of consistency in 2018. He’s being chased in the championship hunt by Jack Meeks, Jackson Gill, Taylor Caprara and several over of the top names in Sportsman racing. They’ll also be chasing show up points on the night along with the hefty paday.

If you can’t make it to the races on Wednesday night you can catch all the action from your cell phone, tablet or smart television via our first ever pay-per-view broadcast on DirtTrackDigest.tv.

Pit gates are scheduled to open at 4 p.m. Spectator gates are opening at 5 p.m. with on track action getting underway at 7 p.m. Grandstand prices are $20, students are just $12 while kids under 10 are free. Pit prices are $35 American or $42 Canadian.

Can-Am Speedway is located just west of Interstate 81 off of exit 49.