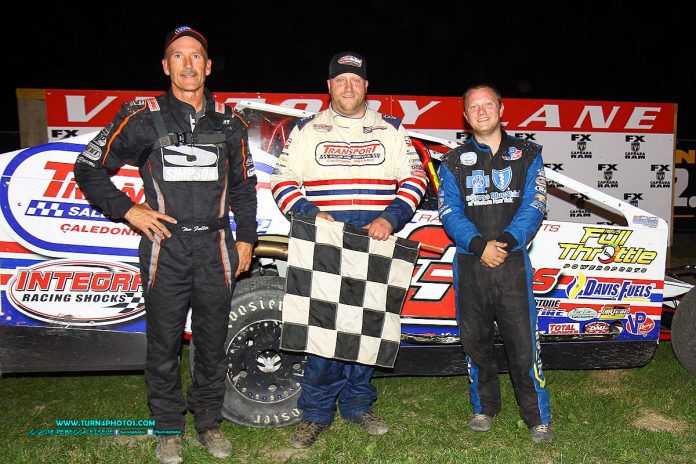 LARFARGEVILLE, NY – Billy Dunn has been on fire at the Can Am Speedway as of late.  The Watertown, N.Y., pilot has won the last two feature events in Friday night competition with the DIRTcar 358-Modifieds.  On Wednesday night he made it three feature wins in a row as he picked up $5,000 by dominating the Big Block/Small Block Shootout 50-lap affair with his big-block.

“It’s awesome,” said Dunn about his win.  “Man I can’t thank Randy Slack and Bob (Slack) enough for putting this deal together and my dad, he owns the motor.”

At the green flag it took Dunn only one time through turns one and two to take the lead.  Dunn got a great jump from his third starting position.  He drove by both Jordan McCreadie and Erick Rudolph on the bottom of the race track as they exited turn two for the first time.

“Talk about a track position race,” stated Dunn.  “I didn’t think I had the best car.  We made about every change possible after the heat race.  Luckily the bottom came in.  That’s usually not my favorite place to run here, but it worked.”

Dunn and Rudolph were fast out in front with Tim Fuller joining the top three mix on lap sixth after starting eighth.  The three were the class of the field pulling away as they raced with one another.

Rudolph remained close to Dunn as he encountered traffic just before halfway.  Both Dunn and Rudolph worked the low lane on the speedway while Fuller attempted to make up ground on the extreme top of the slick surface.

Dunn got to significant slower traffic on lap 28 with Rudolph on his back bumper looking for an opening.  Before Rudolph could take a shot at him, Dunn made a bonsai move to dive under a pair of slower cars in turn three.  The move put some space between him and Rudolph.

As Rudolph continued to struggle in traffic, Dunn was masterful taking advantage of any openings he could find.  Eventually he had numerous cars between himself and the second place running Rudolph.

Dunn watched his lead evaporate on lap 46 as Nick Webb spun off the top in the middle of turns one and two to bring out the caution.  A double-file restart put Rudolph alongside of him with Fuller on his rear bumper.

At the green Dunn led the field into turn one with Rudolph following him in the lower lane as Fuller looked to the outside.  Dunn kept the lead down the backstretch with Fuller pulling even with Rudolph.

Dunn kept the lead through turns three and four as Fuller briefly grabbed second from Rudolph.  Dunn went on to lead the final laps to pick up the win.  Rudolph, in his first appearance at Can Am, finished in the second spot after chasing Dunn for the entire distance.

“Billy (Dunn) was a little bit faster than us tonight,” commented Rudolph.  “He proved that on the restart there.  He deserved the win.  Hats off to him.  It was a fun track to be at for my first time and we’ll take a podium finish.”

Fuller went for it on the last restart but couldn’t get the high-side to stick.  As a result he settled for third.

“I was a little light on traction,” mentioned Fuller.  “Billy (Dunn) did a good job.  He is familiar with track conditions and everything.  I blow in here a few times a year and we were just fortunate to get a third.”

Pat Ward came on late to finish in fourth with Lance Willix finishing in the fifth position.

In DIRTcar Sportsman action, Taylor Caprara and Dave Rogers swapped the lead early in the 30-lap affair.  Caprara ran his No. 21 at the very top of the race track while Rogers tried to make speed on the bottom.  The race looked like it was going to be an easy victory for Caprara until a caution with came with only handful of laps remaining.

On the restart, Shane Pecore was able to get a run on Caprara to drive by him for the lead with an impressive slide job in turns one and two.  Pecore withstood pressure from Cedric Gauvreau in the final laps to take the $1,000 win.

Gauvreau finished in second followed by Dalton Rombough, Rogers and Caprara filling out rest of the top five.