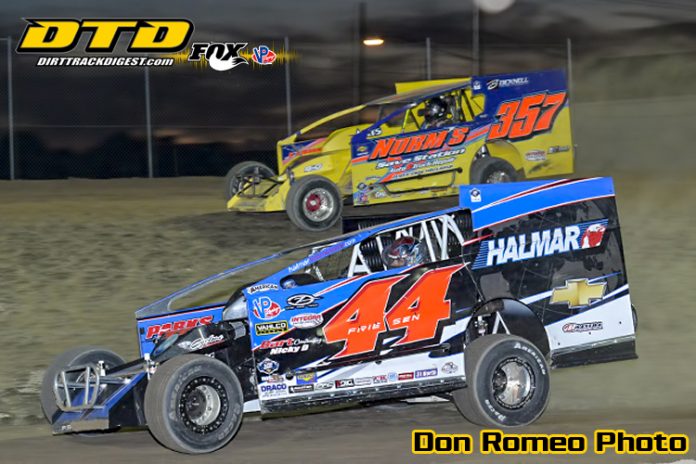 DUNDEE, NY – For only the second time in the track’s history, the Bob Hilbert Sportswear Short Track Super Series fueled by Sunoco & Halmar made its way to Outlaw Speedway on a beautiful summer night. 42 Modifieds, 35 Sportsman, and 26 Street Stocks jammed the pit area for the night’s action.

The 50-lap Modified feature event saw Cory Costa grab the lead with Stewart Friesen on a charge from his 6th starting spot. Duane Howard passed Costa for the lead on lap 4 as Friesen took third spot. Friesen passed Howard and battled
Costa for the lead in traffic as Alan Johnson moved past Derrick Podsiadlo for fourth as Matt Sheppard cracked the top ten after starting 21st. Friesen used the traffic to take the lead as Johnson slid under Howard for third. As Johnson battled

Costa, Mat Williamson moved into the top five. A caution at lap 24 for Danny Johnson going over the turn 3 bank bunched the field back up for a restart, and Howard retook the lead from Friesen. As they closed in on traffic, Friesen retook the lead as Sheppard stormed in from third. Sheppard used traffic to pass Howard and he and Friesen battled side by side until Sheppard got a flat right rear on lap 41, ending his charge.

Mike Mahaney moved into third on the restart as Friesen pulled away up front. At the finish, Friesen had the win, with Johnson holding off Williamson, who moved past Mahaney on the final lap. Ryan Godown used the outside lane to move from 21st to fifth.

In the Outlaw Sportsman Series feature, Brent Ayers took the early lead from Kenny Hammond as Dave Marcuccilli moved into fourth by lap 3. Marcuccilli threaded his way between Hammond and Brian Fish to snag second when the yellow flew on lap 7 for Kirk Reynolds’ stalled car Marcuccilli and Ayers battled side by side for the lead for several laps until Casey Pavlick’s car stopped in turn four on lap 18. Marcuccilli was able to pass Ayers for good on lap 21 to take the win over Ayers, Jimmy Zacharias, Karl Comfort, and Kenny Hammond.

Consolation races were won by Todd Heyward and Brandon Butler.

Jared Hill took the early lead in the 25-lap Street Stock feature, but Glen Whritenour passed him a few laps into the event to take the lead, leaving Hill to battle with a host of others for position. A quick caution before the halfway point set up a restart that saw Dylan Cecee fight past Hill for second, with Brett Crawford and Quinn Sutherland joining in the battle. Whritenour had a right rear go flat on lap 18, ending his bid for the win. On the restart, Cecee battled Hill for the lead and snagged the top spot on lap 20, holding on over the final five laps for the victory. Hill, Crawford, CJ Guererri, and Sutherland rounded out the top five.

There will be no racing at Outlaw Speedway on Friday, June 22nd in observance of area high school graduations. The track returns to action on Friday, June 29th with the $12,000 Outlaw Fireworks Show and a Bicycle Giveaway joining a Super 7 Show at 7pm. For more information, visit www.outlawspeedwayllc.com