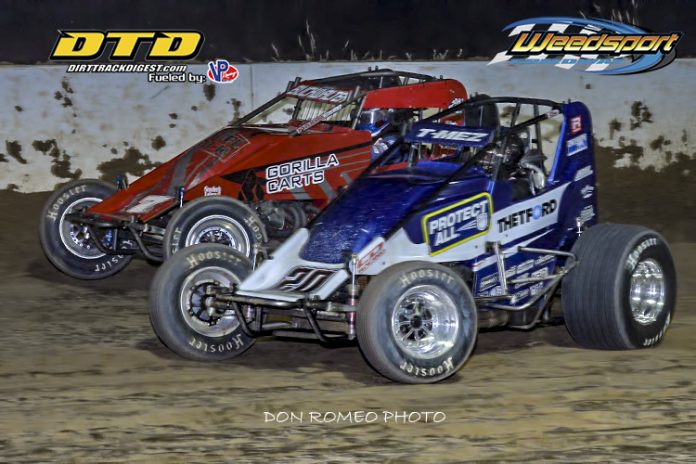 WEEDSPORT, NY – Thomas Meseraull returned to victory lane and Chris Windom returned to center stage as the king of “Eastern Storm” for the second consecutive year Tuesday night in the debut at Weedsport Speedway for the USAC AMSOIL National Sprint Cars.

With a one-point lead over Kevin Thomas, Jr. heading into the 30-lap main event, the arithmetic to earn the “Eastern Storm” title was clear for Windom: beat KTJ and the championship is his.

Windom started from the tenth position while Thomas rolled off from seventh despite a multitude of misfortune that dogged him throughout the early portion of the night. In his heat race, the Dynamics, Inc. machine suffered a blown engine that sent the team into a thrash to swap the engine out and slide another bullet in between the frame rails.

From the get-go, the two were involved in a midfield dog-fight that had them stuffed in a four and five-deep croissant of traffic on the outer edges of the top-ten.

Meanwhile, up front series Rookie Timmy Buckwalter was challenging pole sitter and fellow Pennsylvanian Tony DiMattia for the race lead, which he would conquer on the third lap with an inside pass midway down the back straightaway. One lap later, Thomas Meseraull would slot into second behind Buckwalter.

Back to the title chase, Windom and Thomas were involved in sea of organized chaos with racecars occupying the track from top to bottom to left field. Windom, who fell as deep as 13th in the first third of the race, inched his way forward until he was able to sneak by Thomas on the 12th lap for the 11th spot.

Back at the front, it was a two-car breakaway with Buckwalter and Meseraull separating themselves from the crowd. The two were set to duke it out as Meseraull climbed to the inside of Buckwalter between turns one and two.

However, on the 14th lap, Buckwalter’s bid to become the first “first-time” USAC National Sprint Car feature winner of the 2018 season came to an abrupt halt when he bounced off the turn one wall, then ricocheted into Meseraull and spun sideways against the turn two wall. Buckwalter would restart from the tail, ultimately finishing 13th while Meseraull soldiered on as the race leader.

“He was doing a great job,” Meseraull praised. “He was entering higher into (turn) one and catching the curb earlier and I was slide jobbing myself. I’d run it in on the bottom of one and catch the curb as late as I could because I felt like I wasn’t hitting it so hard. Basically, he got in real high and, honestly, I thought I crashed him, but I didn’t intend to. Then (Crew Chief) Sean (Michael) told me he got into the fence and got the thing all upset. My line was a lot different and I really didn’t have anywhere to go. It was very tricky into one. The only way I could describe it is you go down the straightaway and there’s a 90 degree turn and there’s only 100 feet until I make it all work. That sounds like a lot, but it’s not.”

On the ensuing restart, Courtney emerged as the main contender to Meseraull’s throne. Meseraull was undeterred, using the turn two concrete as an extension of the racetrack by bouncing his right rear off the wall to propel him down the back straight, something that was brought into the discussion between driver and crew chief earlier in the night.

“In the heat race, Sean told me Tyler (Courtney) was gone in the heat race,” Meseraull recalled. “He said ‘you got to slide it in there and bang it off the wall. That’s what Tyler’s doing.’ I told him, exact words, ‘Don’t worry, I’ll crash it in the feature. He says, ‘No, no, no. I’m not saying you weren’t driving it hard. So, I said, ‘Oh, I know I was driving it hard. I’m just saying I will hang it out and bang it off the fence come feature time. Don’t worry.'”

Courtney was hot on the heels of Meseraull’s Chris Dyson Racing/Thetford – ProtectAll – Norcold – Penske Shocks/Maxim/Speedway Chevy by the midway point. Both were entering low in turn one, then sliding up to the outside turn two wall in unison. Meseraull felt the pressure and kicked himself into another gear as he hit lapped traffic with less than five laps to go. Instead of waiting, picking and choosing, he got into the zone, utilizing a line influenced by Buckwalter laps before.

“It was really the first time I got to the outside of a car,” Meseraull remembered. “I pretty much just picked Buckwalter’s entry and ran it in their harder and banged the wall sooner. The curb was better there, but I didn’t feel I had as much time to let the car to slow down before I got to it. We put the Knoxville mufflers on tonight to try to kill some horsepower out of the Speedway motor, so it was quiet. I could hear Tyler behind me, then all of a sudden, I could hear somebody thundering. I could hear him, I could hear him. It put me in attack mode. I’m just fortunate he didn’t get quite close enough because that car’s been rolling really good lately.”

On the final lap, Courtney was within a couple car lengths of Meseraull, looking for any slippage that he could take advantage of, but Courtney connected with the turn two wall just a tad too much, allowing Meseraull to break away and close out his first series victory of the year over Courtney, Justin Grant, Windom and Dave Darland.

It had been a bit of a struggle for Meseraull and the CDR team through the first five races of “Eastern Storm” as they fought to find the right combination following finishes of 9th, 11th, 20th, 12th and 9th. At Weedsport, the team found the Midas touch. Incidentally, the issue was not a lack of horsepower, but too much underneath the hood.

“I don’t actually know what kind of power this thing makes,” Meseraull admitted. “I can imagine it makes over 900. The motors have a curve to them. When you’re coming off the corner, the thing gets about 3000 to 4000 RPMs. You don’t have to be touching the gas and it will just explode on you. With my motor, you pretty much have to run it on the peddle. if you want half throttle, you run half throttle. If you want full throttle, you stand on it. With this motor, you give it half throttle and it’s just screaming. We had it choked up, muffled down, we got the smaller injectors and we got more air filter. We literally did everything to choke it down. We were running the same gear we’d run at Terre Haute here tonight. I would’ve run 40 points less in my car. I think that was really the key. We took out a bunch of gear. The thing would come off the corner, it would be kind of lazy and it wouldn’t blow the tires off down the straightaway. You really have to be able to get this thing to the ground. Our car rolled across the scales at 1400 pounds with me in it and it makes over 900 horse. You can do the math. It’s ridiculous.”

While Meseraull owned the night, the week belonged to Windom, who collected two wins among his five “podium” finishes and a fourth-place result en route to his second consecutive “Eastern Storm” crown.

“It was pretty simple going in, we knew we had to beat him,” Windom said point blank. “I got bottled up the first ten laps or so and it seemed like every move I made was wrong, which got me really frustrated. I fell back to 12th or 13th at one point, but I knew we had a good racecar, so I didn’t want to overreact. I had to start picking my battles and I started picking the cars off and I drove all the way to fourth. It’s been a grueling week for everybody on this team. it shows what they’re made of to be able to come out and do this six nights straight without any issues and bring home the title.”

Windom is keenly aware that eight of the previous 11 “Eastern Storm” champions have ultimately won the USAC National Sprint Car title later that season. Windom believes the correlation ultimately lies in the jelling process that takes place over a weeklong period of long days and long nights, which ultimately pays valuable dividends throughout the remainder of the year.

“When you can come out here and run like this six nights in a row, it really brings you together,” Windom said. “Especially for Derek and I, we’ve had our ups and downs this year. We’ve been good, but this is really a momentum booster for us to come out here and do this. Hopefully it correlates with the rest of the season and we can go back-to-back. We’re just going to keep trying to win as many races as possible, do our jobs and I think we’ll be just fine.”