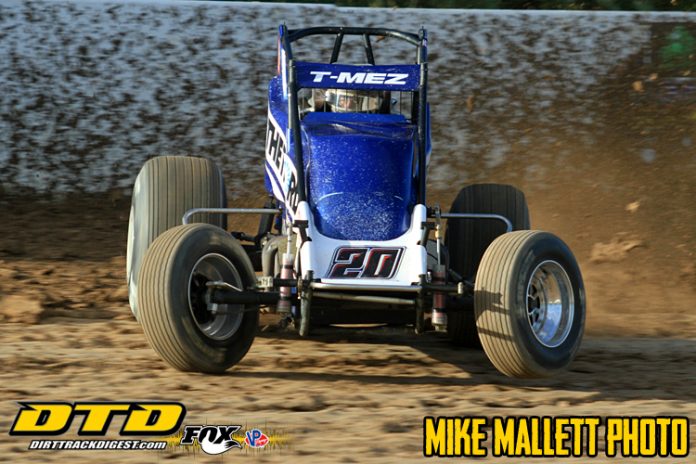 Eighth, Eleventh, Twentieth, Twelfth, Ninth… Those were the finishes for San Jose, California’s Thomas Meseraull (T-Mez as he’s know in the wingless community) coming into the USAC Eastern Storm finale at the Weedsport Speedway. Hardly finishes to write home about for one of the best wingless racers in the Nation and he was the first to tell you about it.

The 37-year-old driver only has four career USAC wins coming into the Storm but that is only because he’s never been a regular with the National Touring Series. T-Mez is good and the stats shown in the five races coming into New York doesn’t reflect the talent.

“You know when you show up with some of the nicest equipment in the pits, brand new Speedway Motor, brand new Maxim, brand new everything you feel like you have to get better results,” he noted.  “There were just nights that we basically wanted to slit our wrists. I mean it’s racing and we are so competitive but when you know you should be a top five car and you have some bad nights I kinda lost my balls and didn’t drive like I should.

“I had a rough Williams Grove and at Port Royal where I probably had my worst crash in my career and it kinda had me not up on the wheel,” Meseraull continued on his style.  “The last couple of nights I let it hang out and that’s what I needed to do.”


Tim Buckwalter led from the start with the Lotier/Frankcowiak entry and led right until lap 13 where controversy entered into the 30-lap, $6,000 to win event. Meseraull did the patented slide job and as he came up to the top, Buckwalter was still there. They made contact and Buckwalter got into the wall and stopped. Meseraull kept going with the lead.

“I feel real bad, I mean I wrecked him there is no other way to put it. I didn’t want to do it but I did,” he said honestly. “That team has run real well with us all week and they didn’t deserve it.”

While he did feel bad, Meseraull still had a job to do and that was to try and put the Chris Dyson owned, Sean Michael wrenched No. 20 in victory lane.

“I think with me being a little older and running more races than these guys helps when you come to a new track where no one has seen before,” Mez kept going.  “We asked a few people, watched a few videos but when you get here you have to adapt. I don’t know if we adapted quicker than others but we had a good car all night.”

With Meseraull out front, the driver known as “Sunshine” in the wingless world (love these nicknames!), was putting pressure on in the closing laps. “This place is a tricky one, especially in turn one where you really have to hit your mark. I feel bad to Ballou and Andretti and we almost had. the same fate as them a few times,” Meseraull talked about Weedsport’s unique D-Shape “Three and four was just plain run er hard on the top, one and two, well there were like 10 different ways you could run those corners.

“I just want to thank Sean Michael for not giving up on me. Sometimes the easiest part to change on the car is the driver but they stuck with me,” continuing on. “I’m excited for them, to finally finish on a high note maybe I’ll get invited back next year.”

What is next for T-Mez? About a month away is probably the most famous, noted and grueling part of USAC’s schedule and that is Indiana Sprint Speedweek. The heart of the tour.

“I am not sure, I know I will run it. Kevin (Briscoe) wants me to run his car or I just might run my own,” he went on, “We will sit down and see what we can come up with but I will definitely be there and hopefully we will get some good runs put together.”