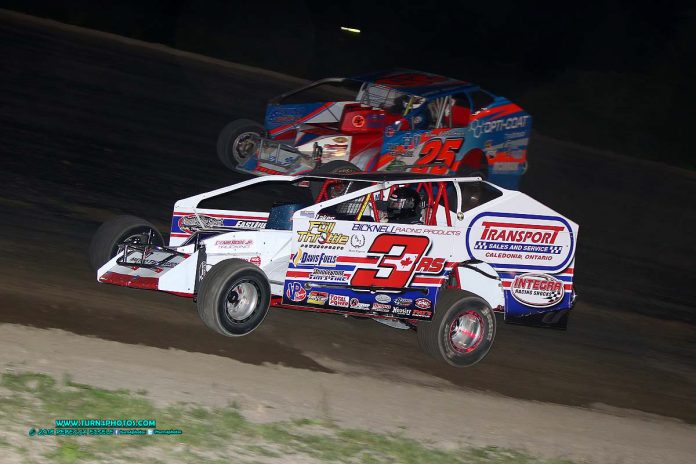 Billy Dunn did what he usually does at Can Am Speedway on Wednesday night, he won. The Watertown, N.Y., driver dominated the 50-lap feature to earn a cool $5,000 payday for the win in the Big Block/Small Block Shootout. He led every lap.

Unlike his other wins, this one was different. Dunn utilized a big-block powerplant under the hood of his Bicknell. It was his first win with this combination since 2014.

“Sometimes you don’t know when the last one is going to be,” commented Dunn about winning in a big-block. “I haven’t won a big block race since 2014. It’s hard to believe it’s been four years. We’ve been really good everywhere lately and hopefully this gets the ball rolling.”

For Dunn, bringing the big-block was the logical choice even though he’s scored wins the last two weeks with his potent small-block combination. He’s been running the big-block car on a more regular basis, including events at the Land of Legends Raceway.

“Can-Am is a big block track,” he said. “As of late I’ve had the opportunity to run more big-block stuff. I’m back to being more comfortable in a big-block. I knew what I wanted to bring.”

After his qualifying heat, Dunn wasn’t happy with how the car was handling so the team went to work. They utilized some of the stuff they’ve been running in the small-block on a weekly basis to make the big-block better. It definitely paid off as he took the lead on the first lap, locked his car right down on the bottom of the speedway and never looked back.

“There is so much new suspension stuff out there,” state Dunn. “We changed just about everything in the back of the car after the heat race. We kind of plugged in everything we’ve been doing with the nine car here the last couple of weeks. I’m not one to really run right around the bottom here but it worked with this car. There was just enough bite right around the bottom. I didn’t know where they were, but I knew they weren’t going to get around me.”

The only challenge for Dunn during the main-event was slower traffic. Dunn made a couple of aggressive moves to make up ground on the lapped cars. When he saw an opening he took it. He wasn’t going to give second place running Erick Rudolph any opportunities to get by him.

“Lapped traffic was tough,” cited Dunn. “They weren’t really blocking but they weren’t holding a line either. You hate to race like that, but at point I’d rather lose the lead wrecking trying to pass a lapped car than have the guy in second pass me because I was going to slow and getting held up. I didn’t race anybody too dirty but I had to do what I had to do.”

Once the race was over and Dunn had a chance to catch his breath, he was thankful for the opportunity he was given to run the big-block on Wednesday. He was grateful to the people that helped put him in position to earn the win.

“It’s not even about the money,” he said. “As I said, it’s been four years since we won a big-blcok race and hopefully it’s not another four before we win another one. I just can’t thank Randy Slack and Bob, everyone at Bicknell’s, Integra Shocks and my dad (Norm) for supplying the motor for this car.”

Erick Rudolph made the trek to LaFargeville, N.Y., on Wednesday night with his potent big-block combination for his first ever appearance at the Can Am Speedway. At the conclusion he found himself finishing in second behind Dunn. He was close to Dunn a couple of times only to have him drive away in traffic.

“I think we had about the same speed of the car, probably a little better at times,” cited Rudolph. “As the run would go on I would catch him a little bit. The bottom was the preferred line out there. It made lapped traffic a little tricky. He shot out of box quick, even if I caught him it would have been tough. The veteran that he is, especially at this track, I doubt he would have made a mistake. It is my first time here.  We got a podium finish so we can’t complain about that.”

Rudolph elected to head north in order to gain experience. Although there were other options closer to his Ransomville, N.Y., home, the big-block/Hoosier tire combination was the decision factor.

“I was looking at our schedule and there really wasn’t any other sail panel, American Racer races that I was going to be doing so it made sense to come here,” mentioned Rudolph. “We figured since this is what we are going to do we have to learn as much as we can and be good at one thing rather than spread ourselves out. I think we learned some stuff here that is going to work in other places. We made a team decision to come here and we had a solid run.”

High-Side Almost Works Out for Fuller

Tim Fuller started the night’s feature from the eighth position. The Edwards, N.Y., driver was quickly into the top three chasing Dunn and Rudolph. Unlike the top two, Fuller was working the extreme outside lane of the speedway. It worked out early, but once he got the traffic he was forced to make adjustments.

“The problem was everyone was on the bottom,” said Fuller. “I thought I could roll top good enough, but then I got into lapped traffic and I had to get slowed down and get back on that bottom. It was good for a while.

A caution with four laps to go gave Fuller a shot at both Dunn and Rudolph. He actually took second from Rudolph briefly and nearly pulled around Dunn only to have them both keep him at bay.

“I had one shot, but my right rear was used up a bit too much by that time from running the outside,” commented Fuller. “If I had a little bit more there may have been something. Once a hard right rear tire cools off you can really get some speed for a lap or two.”

18 Modifieds were present with track regular Jordan McCreadie winning the first heat and Rudolph taking home the second. With a heads up start on the line, that put those drivers on the front row for the start of the feature…

The next big event on the Can Am Speedway schedule is July 4 when they kick off Empire Super Sprint Speedweek along with the Pabst Shootout for the small-block Modifieds.